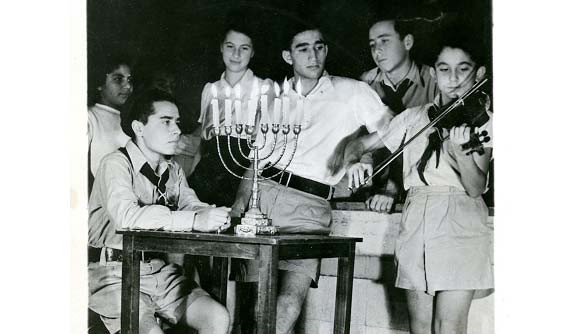 You’ve probably never heard of the late Samuel E. Goldfarb, but chances are good that you’ve heard the music he’s written. In fact, you probably know one of his songs by heart: the Hannukah-season staple “I Have a Little Dreidel.”

Goldfarb came of age at the turn of the century in a Lower East Side tenement, in a large, music-oriented family, and cut his teeth performing Jewish liturgical songs at synagogues throughout Manhattan. He compiled two Jewish songbooks with his brother, Israel. Influenced by Tin Pan Alley, Goldfarb went on to write more secular ditties before landing on the dreidel song, which was published in 1927 (which you can listen to him singing here!) and rose to prominence in the 1950s, when American Jews started commercializing Hanukkah as an alternative to the Christmas ubiquity.

Almost a century later, the song has only grown in ubiquity, though its origins are not well known. Myron Gordon, Goldfarb’s son, now 95 years old, seeks to change that. Gordon had a complicated relationship with his father—Samuel Goldfarb uprooted the family and brought them to Nevada to pursue a love affair—but he seems to have worked through that early trauma, in part by revisiting his father’s work. Recently, Gordon produced a 16-track reworking of his father’s songs, Dreidel I Shall Play, which features a modern take on “I Have a Little Dreidel,” as well as the original.

The Bible in Stereo