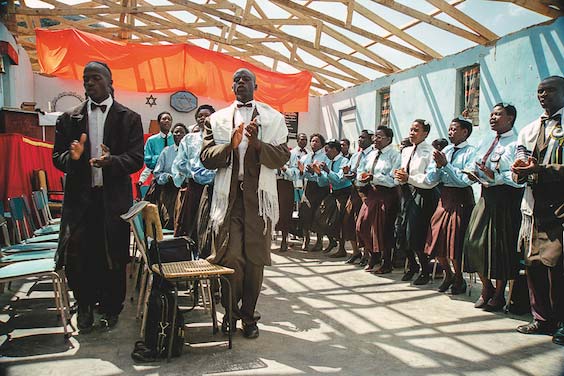 The wandering Jew is more than a stereotype and a striped houseplant.

In their beautiful new book, Scattered Among the Nations: Photographs and Stories of the World’s Most Isolated Jewish Communities, Bryan Schwartz, Jay Sand, and Sandy Carter explore what it feels like to practice Judaism in far-flung corners of the globe.

The photographs are both intimate and expansive: Tombstones inscribed in Hebrew 2000 years ago with a Brahmin cow (in India). Men lined up with chickens at the kosher butcher (in Azerbaijan). Women singing and lighting candles (in Ukraine) as one tells of surviving the Holocaust by living in a hole in the ground.

This book is just as much about how Jews have been scattered as it is about creating your own Jewish community wherever you go. As Joseph Nipah of Ghana says, he appreciated the traditions passed down to him but he had no idea they were Jewish. Now that he knows, he says, “My hope is to teach my children not to go out from Judaism.”

In an age when ethnic and religious clashes are all too common, a book like this offers a lot of hope. The people in these pictures are of all ages, shapes, skin colors and social status. Many have endured drought, famine, and persecution. But they aren’t talking about their hardships. Instead, they are excited to share their candles, their ostrich feathers, their faith in any language.

The Precious Age of 13

Seeking Independence from an Oyster-Filled Marriage?