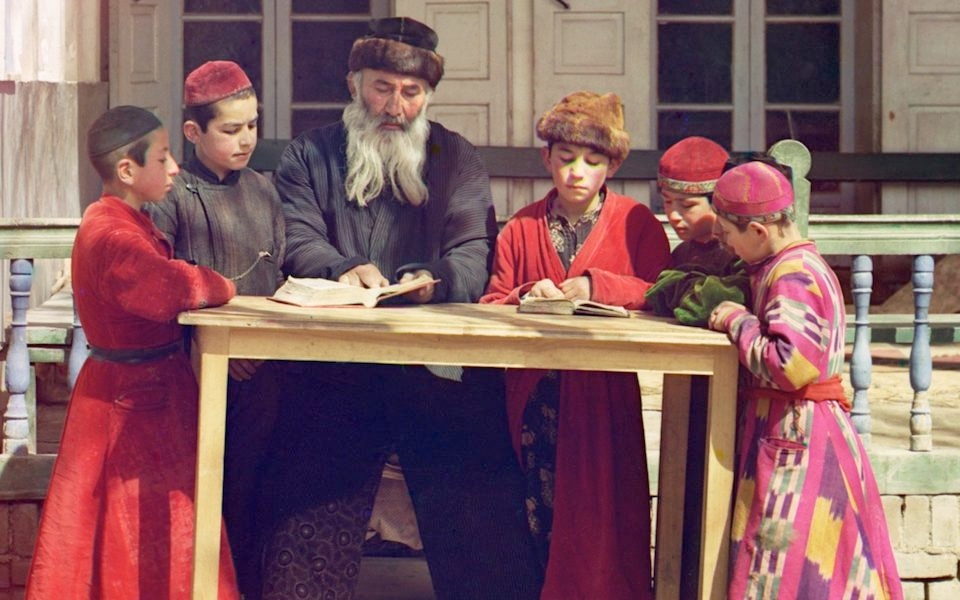 When we think about Jews in the Czarist Russia, what comes to mind? Probably black-and-white, or maybe sepia-toned, images of poor, pious Jews, shot through a dusty lens. So Sergei Mikhailovich Prokudin-Gorsky’s photograph of Jewish boys and their teacher in Samarkand (in modern-day Uzbekistan) might come as something of a surprise.

Prokudin-Gorsky (1863-1944) took the picture of Jewish children and their teacher using color photography technologies he pioneered, as part of a larger expedition to document the Russian Empire’s diverse regions in the years after the 1905 Russian Revolution. He was particularly interested in the newly-acquired areas of Central Asia, and received funding from the Czar Nicholas II himself to carry out his mission.

The Jewish diaspora in Central Asia has its origins in the Babylonian Captivity (around the 6th Century BCE), from which most Jews did not return to Jerusalem, but rather remained in “exile” (that’s where we get the Babylonian Talmud from, too). After the Soviet Union dissolved, most Bukharan Jews left for Israel or Queens.

If we compare Prokudin-Gorsky’s 10,000+ images–some of which we’re showing here–with those of contemporary photographic expeditions, such as those carried out in the Pale of Settlement by S. An-sky and Solomon Iudovin, a fuller picture of Jewish life in the Russian Empire starts to take shape.

Stomping Through Warsaw in Search of the Past
The Surprising Jewish History of St. Thomas, Virgin Islands

The Israeli-American Music Mogul
Hebrew for Fun and Profit