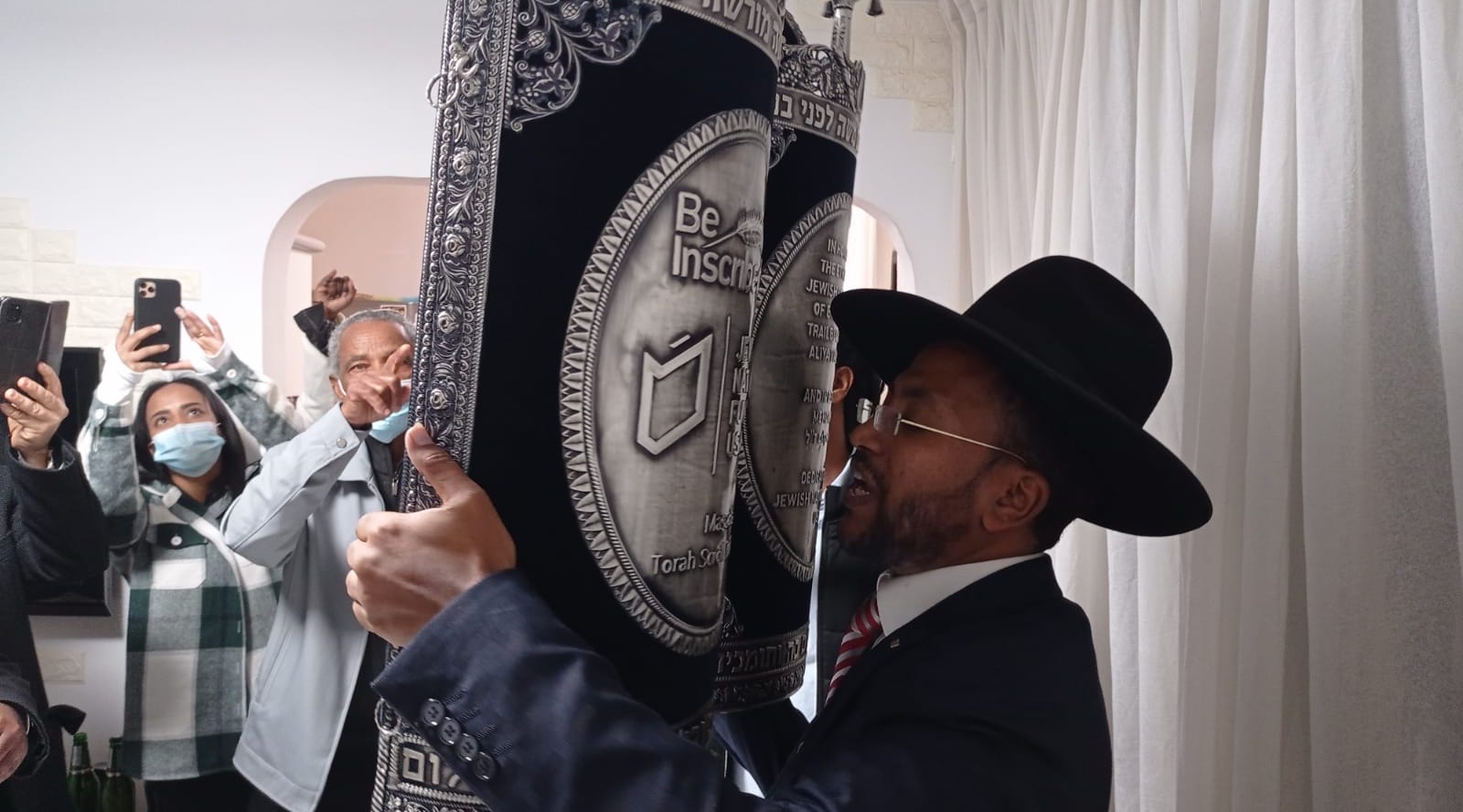 A rabbi holds up his community’s new Torah for all to see. (Courtesy JNF-USA)
Advertisement

Beginning in the late 1970s, a series of clandestine operations brought thousands of Ethiopian Jews home to Israel and led to the establishment of a proud, flourishing community known as Beta Israel. As part of its Be Inscribed project, Jewish National Fund-USA (JNF-USA) recently donated a Torah scroll to the Ethiopian Jewish community in Beersheva as a celebration of Jewish peoplehood and symbol of unity.

Creating a new Torah is an exhausting task, with 304,805 letters to be written by hand with a quill on calfskin or parchment by a trained scribe (sofer). Each letter must be infused with intention and purpose which might explain why it takes a sofer over 2,000 hours to create just one Torah. For one recently created Torah scroll that was inscribed on top of the ancient Jewish fortress of Masada, each letter is infused with intention from individuals around the world who came together through Jewish National Fund-USA (JNF-USA) to donate a Torah scroll to a small, yet strong Ethiopian Jewish community in Israel’s southern desert.

There are around 160,000 Ethiopian Jews living in Israel (less than 2% of the population); 8,000 of whom call Beersheva, the largest city in the Negev Desert of southern Israel, their home. Many of the community are observant and attend the Shavu Banim synagogue in the city, the first synagogue in Israel built for the members of the Israeli Ethiopian community. The synagogue was the recent recipient of a Torah scroll donated by JNF-USA as part of its Be Inscribed project, where people can sponsor a letter, sentence, portion, or an entire Torah scroll to be handwritten atop the ancient cliff fortress of Masada. 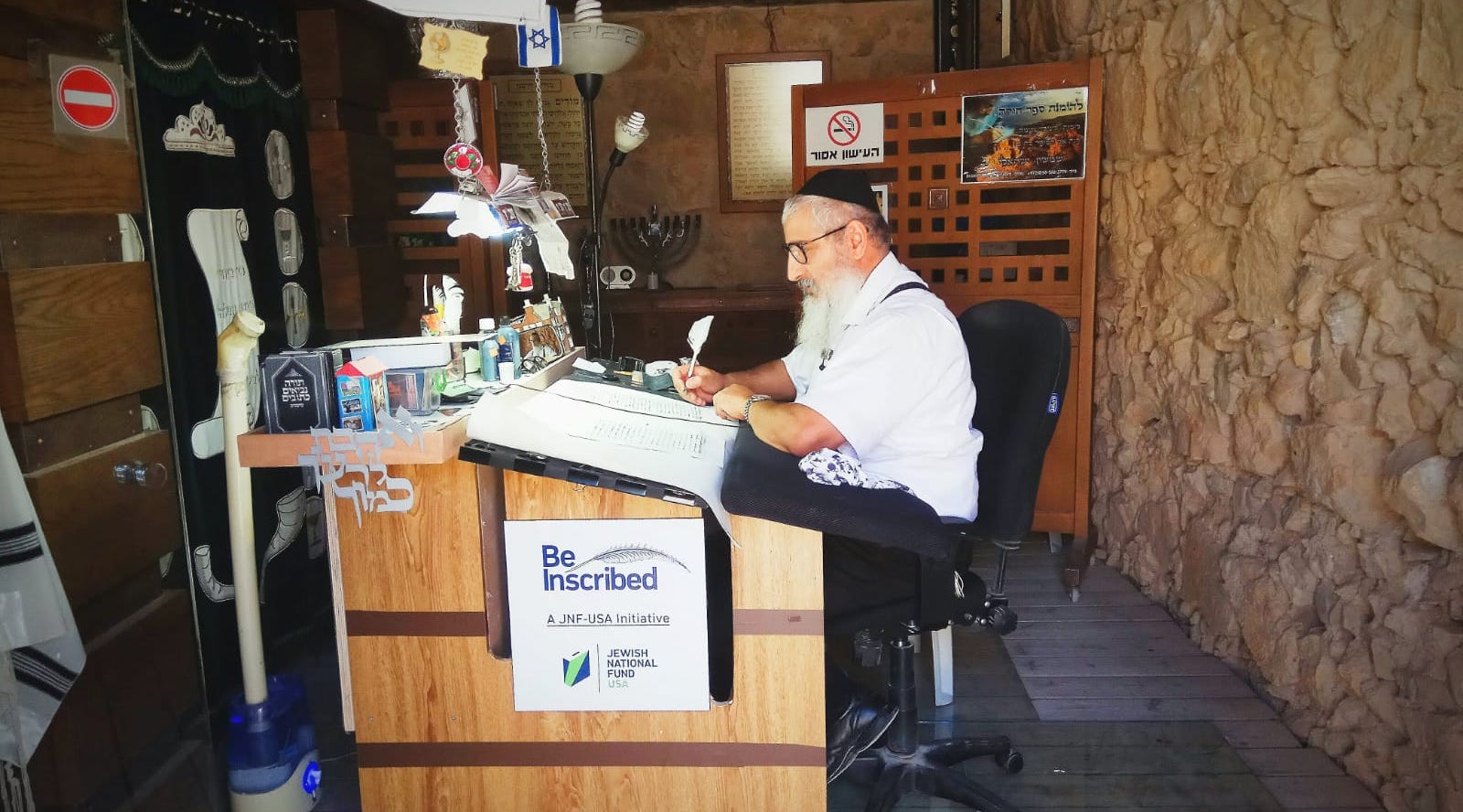 JNF-USA’s “BeInscribed sofer” transcribes a Torah on top of the ancient Jewish fortress of Masada. (Courtesy of JNF-USA)

“The Ethiopian community in Beersheva is among the oldest in Israel and pioneers of the Ethiopian Jewish community’s aliyah (immigration to Israel) back in 1979 and during the 1980’s,” says Naftali Aklum, CEO and founder of project Yerus and liaison to JNF-USA about the Shavu Banim synagogue community members. “They were the first to journey from Ethiopia through Sudan and from there to Israel in a perilous journey. The person who made this aliyah possible was my late brother, Ferede Aklum, who led the first group of Ethiopian Jews into Sudan and then contacted the Mossad Intelligence Agency while he was a refugee in Sudan to help organize the aliyah to Israel.”

Aklum has been involved with JNF-USA for the past five years. “Together we aim to bring the story of Ethiopian Jews to the forefront, a story that is not widely known abroad or in Israeli society,” he says. “I travel to the United States quite often to give lectures at campuses, universities, synagogues and in non-Jewish community centers to highlight our story.”

Two years ago, Aklum spoke with JNF-USA’s chief executive officer, Russell Robinson, about the idea of bringing a Torah scroll to the community’s synagogue. Now, that plan has come to fruition.

“We are all extremely excited, happy and moved by this gesture,” says Aklum. “Our community is very religious and has cherished its connection to Judaism and to G-d for the past 2,500 years. The idea of having a beautiful Torah that will help glorify the sanctity of our synagogue warms our heart, and in the case of my family since the book has been dedicated to the memory of my late father, Yazezwo Aklum.”

Aklum added: “This Torah scroll symbolizes a connection between two communities: the Jewish American community in the U.S. and the Jewish Ethiopian community here in Israel. It’s just like the phrase goes: ‘All of Israel are responsible for one another.’ We are all one big family with the same DNA, and this just proves it.” 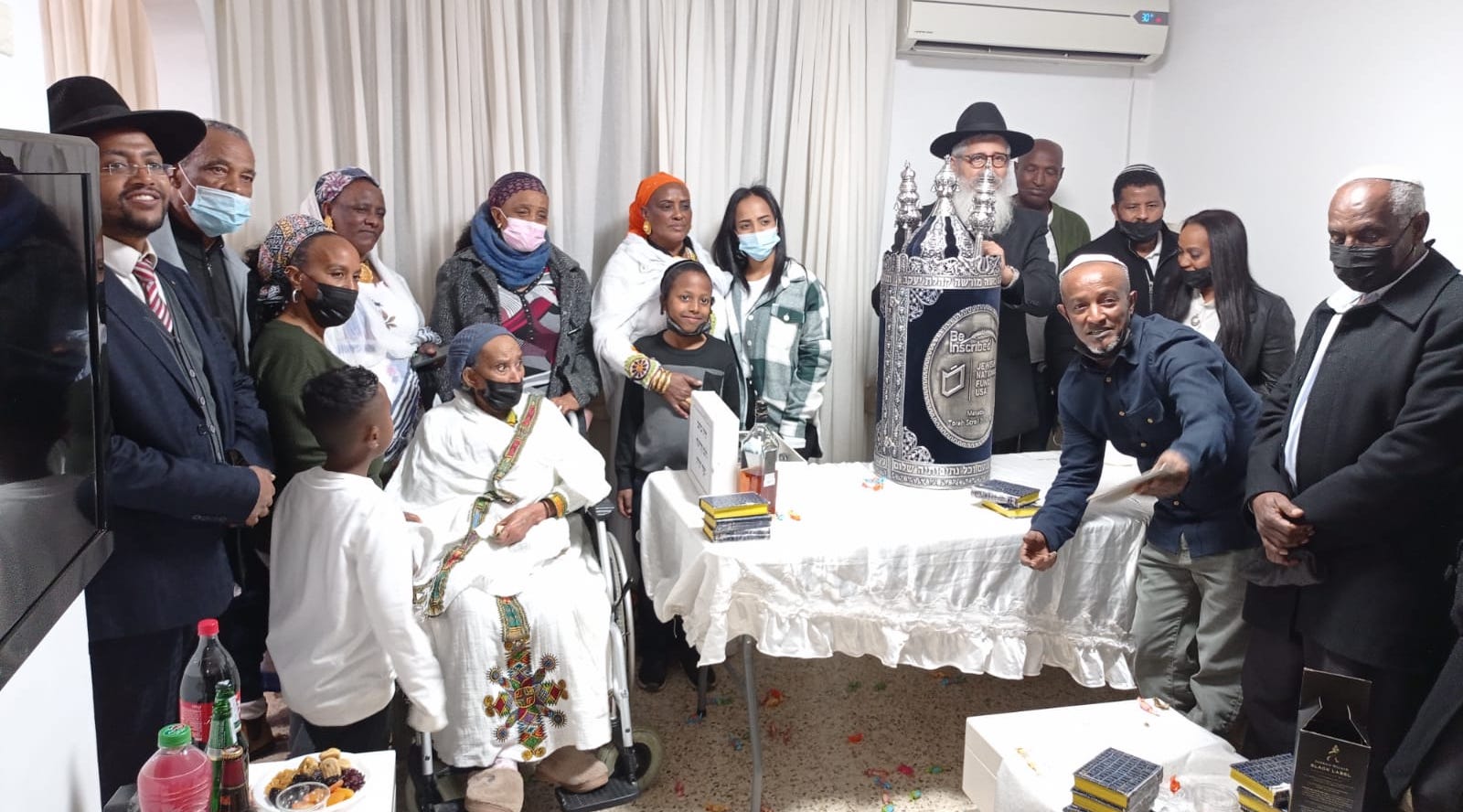 Members of Beersheva’s Jewish Ethiopian community gather around their Torah donated by JNF-USA. (Courtesy of JNF-USA)

According to Aklum, the Ethiopian Jews have been the true heroes of their aliyah story. “One of the main things that the Torah tells us is to recognize the good,” he says. “We recognize all the good that American Jews have brought upon our community since the 1970’s when they first supported our aliyah efforts. I think our connection to JNF-USA can help bring our community the things it needs to better assimilate into Israeli society. More so, I believe that the story of the Ethiopian Jews can help bridge the gaps that the Jewish American community faces when dealing with other communities in the United States.”

To recognize someone through a letter, word, verse, or more written in a Torah by a scribe on top of Masada, visit beinscribed.org.