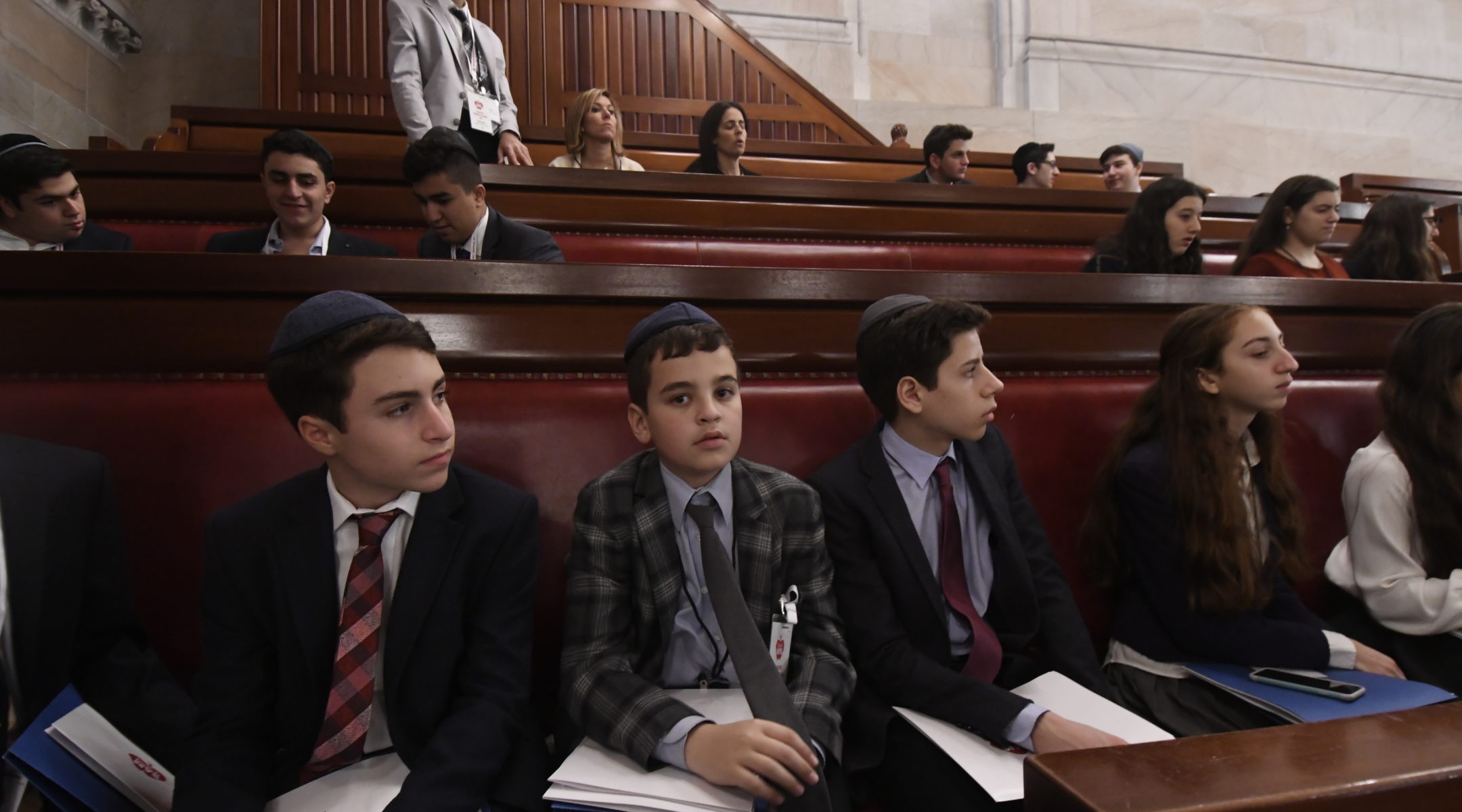 This article was sponsored by and produced in partnership with the Orthodox Union, the nation’s largest Orthodox Jewish umbrella organization, dedicated to engaging and strengthening the Jewish community, and to serving as the voice of Orthodox Judaism in North America. This article was produced by JTA's native content team.

ALBANY, N.Y. — When 14-year old Sonny Azizian boarded the bus to Albany, N.Y., at 7 A.M. the sun was just rising. He was not alone. He joined some 600 other Jewish students, teachers and parents across New York on a visit to the state’s capital.

But this was no ordinary field trip. This was democracy in action.

This trip was organized by Teach NYS, a division of the Orthodox Union Advocacy Center. While the O.U. is known primarily for its work in the kosher and synagogue industries, the O.U.’s Teach Advocacy Network has nothing to do with food or prayer. The state Teach offices have one goal: to make nonpublic school education affordable and safe for every child. The New York office, the largest of the Teach Advocacy Network, is four years old and has already delivered $150 million to Jewish schools across the Empire State.

But “we are not done yet,” said Maury Litwack, Teach NYS’s executive director. “Every year, we achieve more for our schools, and this year is no different.”

This year Teach NYS is pushing for an increase in security funding for nonpublic schools and funding for science, technology, engineering and math (STEM) education. Teach NYS makes an argument about equity, and it’s one that resonates with its supporters.

“Nonpublic schools deserve equal funding for basic educational services, like teaching them the skills they need to be successful, including STEM, and the ability to hire security guards to keep our children safe” said Rabbi Alan Berkowitz, principal at Magen David Yeshivah Elementary School. “Our parents pay property taxes that fund the public school system, but also have to pay tuition. All children deserve a quality education – regardless of which type of school they attend.”

This year, Teach NYS sought to leave its mark on the state stage. While last year’s mission brought a handful of leaders to Albany, Litwack and his lay leaders recognized the importance of engaging the larger Jewish community. This year, Teach NYS brought approximately 600 people to the capital and enlisted leading political figures to speak to the group, including New York Governor Andrew Cuomo, Senate Majority Leader John Flanagan, and Senate Coalition Leader Jeff Klein.

“This is fundamentally a grassroots effort,” said Cal Nathan, a parent in the Hebrew Academy of the Five Towns and Rockaway (HAFTR) and a member of the Teach NYS board. “Politicians listen when the people speak. So we decided to bring the people to Albany to give them a voice.”

Sonny joined 30 of his fellow students from Magen David Yeshivah, an Orthodox high school in Brooklyn, along with hundreds of other students. From HAFTR in the Five Towns to North Shore Academy in Great Neck to Solomon Schechter of Westchester to ASHAR of Rockland County to Maimonides Hebrew Day School in Albany, these students came to make their voices heard.

“It was very educational to learn how our state government runs and seeing it in action as we toured the beautiful New York State capitol building,” said Sonny Azizian, president of the Magen David Yeshivah Elementary School Student Council. “As an 8th grader who can’t vote yet, the opportunity to lobby for educational funding that will assist me and my fellow students during our schooling was something I will always cherish as proud citizen of New York.”

Litwack and his cohorts are not shy about their agenda. “We are here to talk to legislators, to introduce legislators to the students and teachers that are most affected by their budget decisions,” he said. “I’ve worked in politic a long time, and politicians listen when you make your voice heard.”

“Today is more than a fun-filled field trip to Albany. Today is all about how we change the way the state government thinks about education and thinks about our schools,” said Allen Fagin, CEO of the Orthodox Union. “Education is a civil right, that your right to choose how and where to be educated, without financial hardship and without financial penalty, is a civil right that every parent and every student in this state should enjoy.”

The governor reflected on the importance of religious nonpublic schools, mentioning his parents’ decision to send him to Catholic school. “The religious schools …. are a very, very important part of our educational system. First, because people have choice… If you want to preserve the public education system, you have to make sure that the religious education system stands strong.”

Senate Majority Leader John Flanagan went a step further, wholeheartedly embracing STEM education funding. In New York’s divided government, the Republican Flanagan has been one of the most ardent supporters of the nonpublic school community.

“The New York State Senate supports, essentially, everything that you advocate. Whether it’s after-school transportation, STEM, security, whatever it may be, the greatest way we can help you is by fundamentally listening,” the leader said.

In the afternoon, the students broke into groups to tour the city’s historic capitol building, meet with legislators and learn about the legislative process. Students peppered leaders with questions about how education is funded, where tax dollars go, and even “Have you met Donald Trump?” 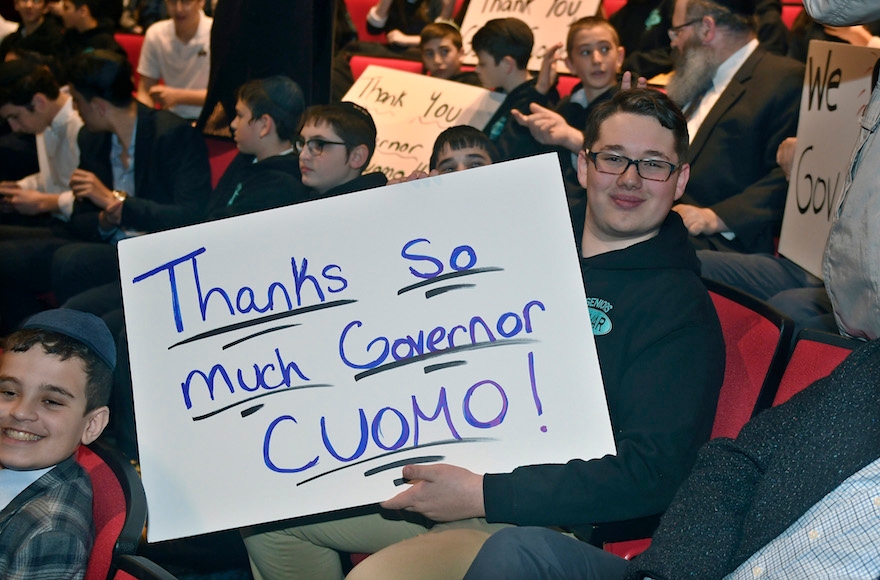 Many of the students and parents were first-timers to the Teach NYS experience, and they walked away impressed. “Teach NYS is important to nonpublic schools to make sure that these students have the same resources that the public students do, as far as the core curriculum goes,” said, Debra Inger, a parent at ASHAR in Rockland County.

Sami Gubin, an eighth grader at Solomon Schechter of Long Island, appreciated the importance of the mission. “The Teach NYS mission is extremely important because nonpublic Jewish schools – they’re very important – because they help Jewish children connect to their heritage.”