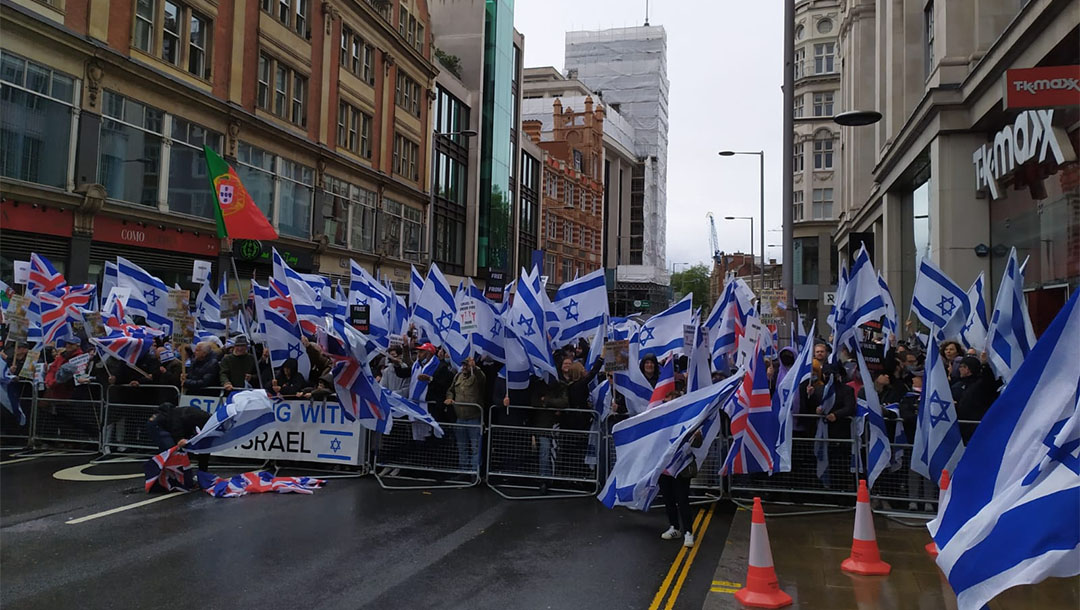 Supporters of Israel demonstrate in London, May 23, 2021. (Courtesy of the Israeli Embassy in the United Kingdom)
Advertisement

In addition to hundreds of Israeli flags at Sunday’s rally on Kensington High Street, participants also waved flags of Portugal, India and the Netherlands, The Jewish Chronicle reported.

The rally was scheduled last week, when Israel and Hamas were engaged in hostilities. Hamas, the ruling political party in Gaza that has been designated a terrorist group by the United States, European Union and others, launched thousands of rockets into Israel beginning on May 9, prompting Israeli strikes in response. Some 230 people died in Gaza and 12 died in Israel during the 11-day exchange, which ended with a ceasefire early Friday.

Antisemitic incidents have skyrocketed in Europe and the United States in connection with the fighting.

Among the participants was Stephen Christopher Yaxley, a far-right activist better known as Tommy Robinson who has spoken out against Islam as a religion. Following jihadist terrorist attacks in London, he said during a speech in 2011 that all Muslims “got away” with the attack and vows that “the Islamic community will feel the full force of the English Defense League if we see any of our citizens killed, maimed or hurt.”

Yaxley has since quit the radical English Defense League and apologized for blaming all Muslims for terrorism, but has remained a vocal opponent of Muslims seeking asylum in the United Kingdom.

CST, British Jewry’s main security unit, criticized Robinson’s presence at the event, saying in a statement that he is “an extremist and we utterly reject his message of hate and division. His so-called support for our community is not welcome or helpful.”