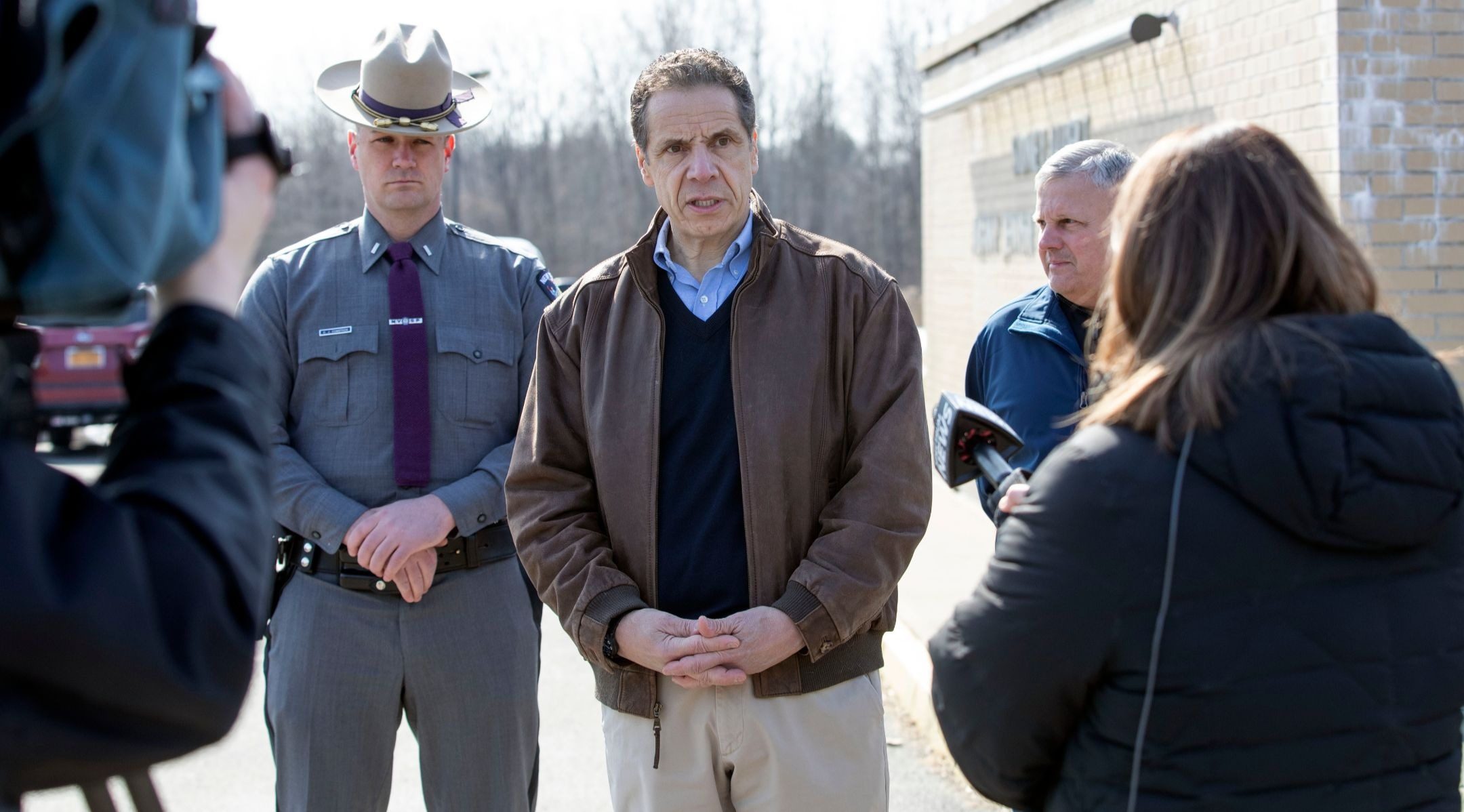 New York Gov. Andrew Cuomo talks to reporters in front of the Sidney Albert Albany JCC after the building was evacuated due to an emailed bomb threat, Feb. 23, 2020. (Mike Groll/Office of Gov. Andrew Cuomo)
Advertisement

None of the threats have been found to be credible, though local law enforcement agencies have been notified. Officials do not know who sent the threats. They targeted Jewish community centers in New York, New Jersey, California, Texas and elsewhere throughout the country.

The Jewish Telegraphic Agency has learned from officials familiar with the threats that most of the JCCs affected received identical emails containing bomb threats. None of the emails, however, named the specific institutions in question or contained anti-Semitic language.

“Our goal has been — and we seem to be succeeding — to go about our day with as much normalcy as possible,” said Martina Hull, interim executive director of the Sidney Albert Albany JCC in New York, which received a threat Sunday morning. “There was an indication of a threat and the Albany JCC was not mentioned specifically within that, but it was enough to raise awareness.”

The spate of threats recalls successive waves of bomb threats made against JCCs and other Jewish institutions in 2017, many of which led to building evacuations. Most of the threats came from a 19-year-old American-Israeli citizen, Michael Kadar. Last year, Kadar was sentenced to 10 years in prison.

“Yesterday, there were some similarities,” Hull said regarding the threats received by her JCC in 2017 and this year. “But it wasn’t anything that got me riled.”

The JCC Association of North America, the umbrella group for the centers, said in a statement that it was working with the Secure Community Network, which coordinates security for Jewish institutions, in response to the threats.

“Having faced similar threats in 2017, our JCCs have protocols in place to respond to such scenarios,” the JCC Association’s president, Doron Krakow, said in a statement. “We are grateful for the immediate and ongoing response from law enforcement across the country.”

According to Albany Police Department spokesman Steve Smith, the Albany JCC was evacuated for a couple of hours while officers did a sweep of the building. Smith said the JCC received a “generic email” that mentioned a bomb. Police will be present at the building for the near future when parents drop off and pick up their children.

“When you threaten a JCC, these are, it’s not just an anti-Semitic attack. You have children who go to the JCC. You have gym facilities here. So, you are really threatening children,” he said. “It is one of the most heinous things you can do. And again, it is fear and it is terror. That is all it is – terror.”

Bomb threats were made by email today against multiple Jewish Community Centers across NY.

At @AlbanyJCC, police evacuated the building, then declared it safe. An investigation into the threats is ongoing.