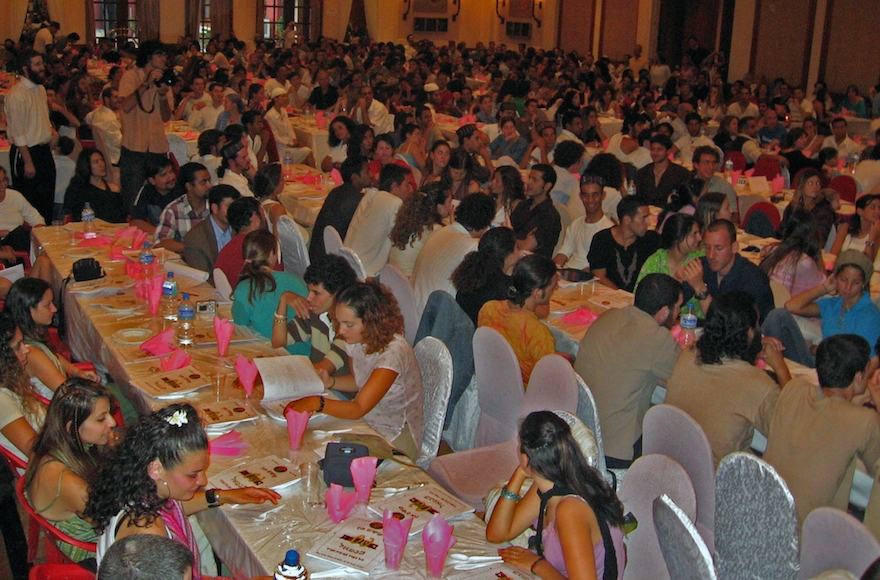 The main hall of the Passover Seder of Kathmandu at the city's Radisson Hotel, April 6, 2012. (Courtesy of Eyal Keren)
Advertisement

JERUSALEM (JTA) — A Chabad emissary in Kathmandu will not participate in Israel’s marquee Independence Day ceremony after being ordered to withdraw by a Chabad rabbinical court.

Chani Lifshitz said on Facebook that she would not contest the rabbis’ decision to block her from the country’s annual torch-lighting ceremony.

“I cannot enter the fire of discord,” she wrote.

In a letter dated April 17 and signed by the seven members of the Israel-based court, the rabbis told Lifshitz to back out of the torch-lighting, noting that she requires their permission to participate in any such ceremony. The letter gave no additional details.

Each year on the evening of Israel’s Independence Day, 12 people who are special to Israel and the Jewish people are chosen to light torches during the ceremony on Mount Herzl. Being chosen is considered a great national honor.

This year, because of restrictions due to the coronavirus, the rite on Tuesday evening will be held remotely — but torch-lighters were chosen as usual. Israel’s minister of culture and sport announced that Lifshitz, who has run the Chabad House in the Nepali capital with her husband, Chezki, for 20 years, would be one of them.

She “symbolizes the concern for others, warm hospitality and love of the Jewish People that characterize the holy work of Chabad Houses around the world,” the minister said at the time.

Now, as a result of the Chabad court’s decision, Lifshitz is not participating. On a Facebook page she shares with her husband, and also posted on the Chabad of Kathmandu Facebook page, Lifshitz said she would adhere to the decision of the rabbinical court. She also said she did not need the ceremony to feel good about her work.

“Maybe I won’t hold a torch in my hands, but I already have received the greatest honor in this world — a life of purpose and mutual assistance,” she wrote. “There is no greater gift than this.”

Unlike most other Hasidic Jews in Israel, Chabad adherents serve in the army and vote in national elections, making them more embedded in mainstream society. What’s more, Chabad centers throughout the world host and assist Israelis during their pre- and post-army treks.

Thousands of Israeli backpackers visit the Chabad in Kathmandu each year, including for a Passover Seder that is likely the largest in the world. This year, of course, that event did not take place.