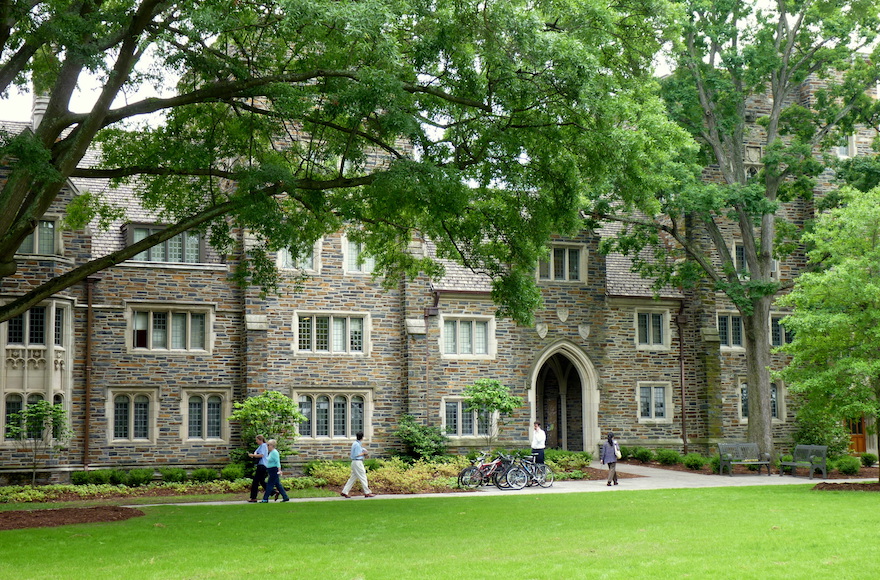 A view of the Duke University campus (Wikimedia Commons)
Advertisement

(JTA) — Duke University has resolved a discrimination complaint filed by the U.S. Department of Education’s Office of Civil Rights over a Middle East conference on Gaza co-sponsored with the University of North Carolina-Chapel Hill.

The Zionist Organization of America filed the complaint  in April 2019 over the conference held the previous month at the University of North Carolina titled “Conflict over Gaza: People, Politics and Possibilities.” The conference featured a performance by the Palestinian rapper Tamer Nafar that was condemned as anti-Semitic. Days after the conference, swastikas and anti-Semitic flyers were discovered on campus.

UNC agreed to a resolution agreement with the Department of Education in November.

Under the agreement, Duke was required to issue a statement to “all University students, faculty, and staff” against discrimination, with an emphasis on anti-Semitism, by Jan. 30. Kimberly Hewitt, vice president for institutional equity and chief diversity officer, emailed the statement to the community on Jan. 29, The Duke Chronicle student newspaper reported.

“Simply put, the University does not tolerate anti-Semitism, and I encourage any member of the community to report when such conduct occurs,” Hewitt wrote, according to the Chronicle.

The University also submitted an updated version of the Policy on Prohibited Discrimination, Harassment and Related Misconduct to the Office for Civil Rights.

The resolution also required that future diversity and inclusion training sessions offered to the Duke community include a section regarding how to avoid and respond to anti-Semitism on campus.

The complaint was filed under Title VI of the Civil Rights Act. Title VI prohibits national origin and other forms of discrimination at federally funded programs, and protects Jewish students from anti-Semitic harassment.