Airbnb will cancel its ban on West Bank settlement listings 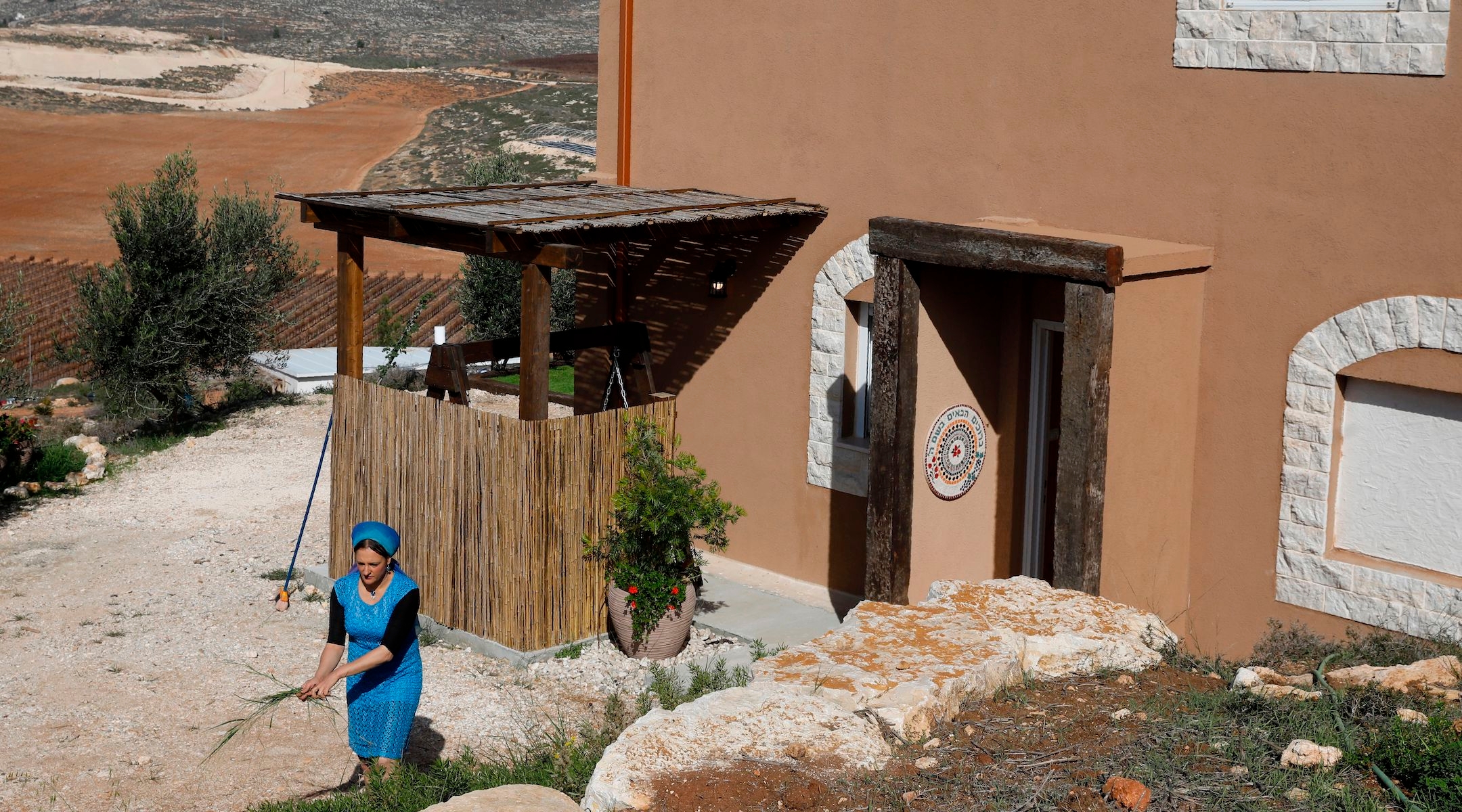 Moria Shapira, an Airbnb apartment owner, cleans her apartment in the Adei Ad outpost north of the Palestinian village of al-Mughayyir, near the West Bank city of Ramallah, Nov. 20, 2018. (Menahem Kahana/AFP/Getty Images)
Advertisement

(JTA) — In a reversal of a 2018 policy announcement, Airbnb will not remove West Bank settlement listings from its website.

The policy change came after two federal court settlements Monday between the vacation rental company and two groups of American Jewish plaintiffs who had sued the company. One was organized by Shurat Hadin-Israel Law Center, a pro-Israel law organization, and the other was represented by lawyers Marc Zell and David Schultz. A copy of the Shurat Hadin settlement obtained by the Jewish Telegraphic Agency says that Airbnb will now allow rentals in both Palestinian areas and Israeli settlements of the West Bank.

“Airbnb takes no position on the Host-Plaintiffs’ claims, or others’ claims, to legal title to the properties on which the accommodations are located,” the court settlement reads. “All listings for accommodations located in the Affected Region [the West Bank] will at all times be permitted on its platform, subject to applicable laws, rules, and regulations.”

Airbnb announced in November that it would remove some 200 rental listings in West Bank settlements because it contended that the settlements “are at the core of the dispute between Israelis and Palestinians.” The movement to boycott Israel saw the decision as a victory.

But Airbnb never actually removed the listings. And in a statement posted to its website Tuesday, Airbnb said it will now donate any profits from the West Bank to humanitarian groups. It also will apply the same policy to Abkhazia and South Ossetia, two disputed territories adjacent to Georgia, and evaluate its listings in other disputed territories.

Airbnb has yet to announce where it will donate the profits.

“We understand the complexity of the issue that was addressed in our previous policy announcement, and we will continue to allow listings throughout all of the West Bank, but Airbnb will take no profits from this activity in the region,” the statement reads. “Any profits generated for Airbnb by any Airbnb host activity in the entire West Bank will be donated to non-profit organizations dedicated to humanitarian aid that serve people in different parts of the world.”

Airbnb said in its statement that it does not support the Boycott, Divestment and Sanctions movement targeting Israel.

“Airbnb has always opposed the BDS movement,” the statement reads. “Airbnb has never boycotted Israel, Israeli businesses, or the more than 20,000 Israeli hosts who are active on the Airbnb platform. We have always sought to bring people together and will continue to work with our community to achieve this goal.”

Shurat Hadin organized its suit on behalf of a dozen American Jewish families, most of whom own properties in West Bank settlements. The Zell and Schultz suit came on behalf of five similar clients. Both suits were filed under the Fair Housing Act, which was meant to prevent discrimination against minorities in the United States. The plaintiffs said that because Airbnb is based in the United States, it must adhere to the act in all its listings worldwide.

In the lawsuits, the plaintiffs claimed that Airbnb was discriminating against them for being Jewish, given that it still allowed listings by Palestinian Muslims and Christians in the West Bank.

“The policy Airbnb announced last November was abject discrimination against Jewish users of the website,” Nitsana Darshan-Leitner, the president of Shurat Hadin, said in a statement. “Whatever one’s political view, discrimination based on religious affiliation should never be the solution.”

Two Palestinian Americans, as well as two Palestinian villages, filed counterclaims to the Shurat Hadin suit. The villages lay claim to the land that two of the plaintiffs’ Airbnb rentals sit on and are therefore accusing the settlers of theft. The Palestinian Americans are also claiming discrimination based on national origin, as Palestinians are not allowed to enter Israeli settlements without a special permit. Their motion to intervene in the suit was filed by the Center for Constitutional Rights, a U.S.-based legal advocacy group that advocates for Palestinian causes.

In a statement, the center said it was seeking to have the counterclaim proceed, even though the lawsuit itself has been settled.

Airbnb’s policy change also came after a dialogue with the Anti-Defamation League on the issue. The group had sent an open letter to Airbnb CEO Brian Chesky when the initial policy was announced, asking what territories it applies to, which experts Airbnb consulted and whether it applies to other disputed areas as well.

Jonathan Greenblatt, the ADL’s national director, subsequently exchanged emails with Chesky and met with him in person in January to discuss the issue. Greenblatt said the ADL “had some indication there was an announcement pending” on the matter. He said that while the ADL supports the establishment of a Palestinian state alongside Israel, it opposes boycotts as a tactic to advance that goal.

“The company demonstrated a kind of maturity that I don’t always see from young companies, a willingness to thoughtfully engage with stakeholders on the issue, to listen in an attentive way and take action,” he said. “They have a desire to be a values-driven business and what we pointed out was that this decision was inconsistent with that approach.”