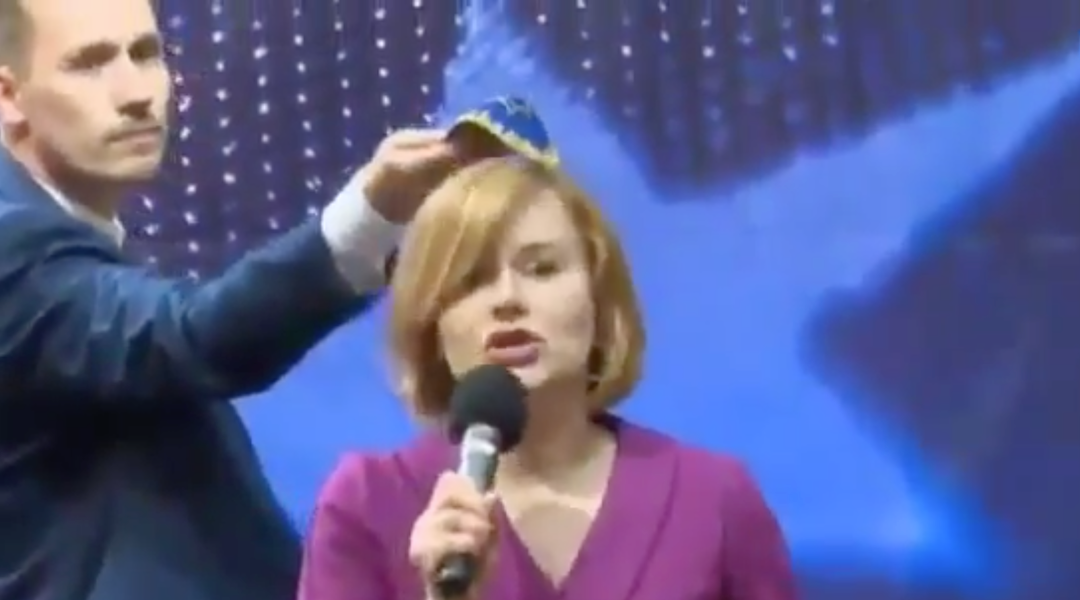 On a televised political debate, Konrad Berkowicz put a kippah on the head of Anna Krupka. (Screenshot from Twitter)
Advertisement

(JTA) — Here’s how a far-right Polish politician made his point during a televised debate: He slipped a kippah on the head of his opponent.

Konrad Berkowicz and Anna Krupka were representing their parties for the May 26 European Parliament elections: Berkowicz for Korwin, Krupka of the ruling right-wing Law and Justice Party.

Krupka, a state secretary for sports and culture, was speaking when Berkowitz, a senior member of Korwin, placed the Jewish skullcap on her head. She didn’t notice for a few seconds and kept speaking.

A popular slogan among Korwin supporters is “Poland, not Polin,” a reference to the country’s name in Hebrew.

A far-right Polish politician said that footage of locals beating an effigy of a Jew shows that his country is being spied on by Jews or Freemasons.

Janusz Korwin-Mikke, a former lawmaker in the European Parliament and leader of Korwin and several other ultranationalist movements, has a history  of making anti-Semitic statements. Last month he aired a conspiracy theory about Jews while commenting on reports in the Israeli media on a custom in which residents of the town of Pruchnik beat with sticks an effigy of an Orthodox Jew representing Judas Iscariot, the betrayer of Jesus.

Korwin-Mikke said that Jonny Daniels, the Israeli-British founder of the Holocaust commemoration group From the Depths, was a foreign agent “sent here to spy, perhaps working for Freemasons.”

The debate involving the kippah was held Saturday in Kielce, a southern city in Poland that was the site of a pogrom of Polish Jews by their non-Jewish neighbors in 1946.

Separately, Polish Prime Minister Mateusz Morawiecki reiterated his government’s objection to offering what he called “damages” over issues that go back to World War II.

“If today anyone says that Poland has to pay damages to anyone, then we disagree and will continue to do so and it will not happen as long as the country is ruled by Law and Justice,” Morawiecki said during a party event Friday in Lodz. “If there were such a terrible injustice, inverting torturer and victim, it would contradict any elementary principle of international law. This would also be Hitler’s posthumous victory, which is why we will never allow it.”

Israel, the United States, the United Kingdom and Jewish groups have protested Poland’s failure to pass restitution laws for privately owned property lost by Jews in the Holocaust.