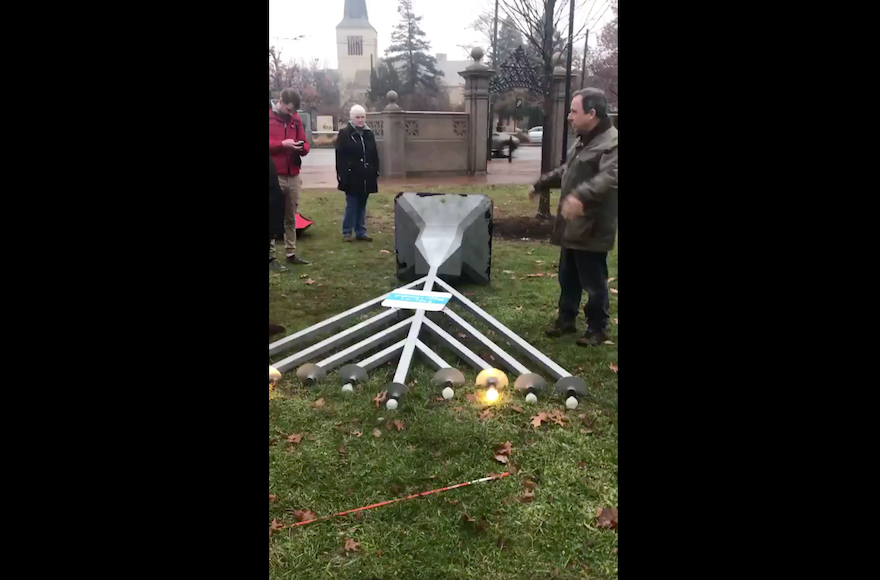 CAMBRIDGE, Mass. (JTA) — A large menorah was toppled in a public park near Harvard University just before the start of the first night of Hanukkah.

A white male dressed in black was seen riding his black bike up to the menorah in Cambridge Common and pushing it over on Sunday afternoon, according to two witnesses, the city’s police department reported. He then rode away.

“We’re looking into the possibility of it being a hate crime,” police spokesman Jeremy Warnick told the Boston Globe.

In a video recorded by a passer-by immediately after the menorah was toppled, a group of people walking through the Cambridge Common was seen lifting the menorah back into place. The video has been viewed more than 9,400 times.

The menorah is sponsored by Chabad at Harvard with permission of the city of Cambridge, according to Rabbi Hirschy Zarchi, the college Chabad’s director. His organization has sponsored the public menorah for some 19 years, he told JTA.

The menorah has been vandalized before, Zarchi said, but the last time was about a decade or more ago.

Walking past Cambridge Common today w @itsmejono, we saw the park menorah on the ground. 2 young women had witnessed a young man on a bike push it over with intent. We gathered some strangers to help us put it back up. Then the older, Jewish gentleman said a Hanukkah prayer. pic.twitter.com/dm5oX0aX0I

“Cambridge stands in opposition to such animus and remains vigilant to the slightest offense,” he tweeted Sunday.

We are awaiting further details as the @CambridgePolice investigate. In the absence of more info, the Mayor’s Office considers the toppling of menorah as an act of hatred. Cambridge stands in opposition to such animus and remains vigilant to the slightest offense. Full statement: pic.twitter.com/Uls4Q8dojy

On Nov. 28, a 6-foot-high, 300-pound menorah was stolen from outside a synagogue in nearby Brookline, a Boston suburb. It was later found nearby, according to Boston police, who said the thief may have wanted to sell it as scrap metal, the Globe reported.

A spate of anti-Semitic incidents including swastikas and hate speech have beset a town north of Boston.

“This negativity and hate is out there,” Zarchi said.

But the rabbi said he took comfort from the kindness of the people who “sprung into action to restore the menorah and put it back in place.”

“It’s a very Hanukkah story,” he said, of the power of light over darkness. “Their actions moved many in the community.”

On Tuesday evening, Chabad at Harvard was to hold its annual menorah lighting on Harvard Yard, with Harvard President Lawrence Bacow lighting the menorah. On Thursday, the Chabad community will gather at the public menorah on the Cambridge Common and acknowledge the efforts of those who restored the menorah and the people who recorded the video.