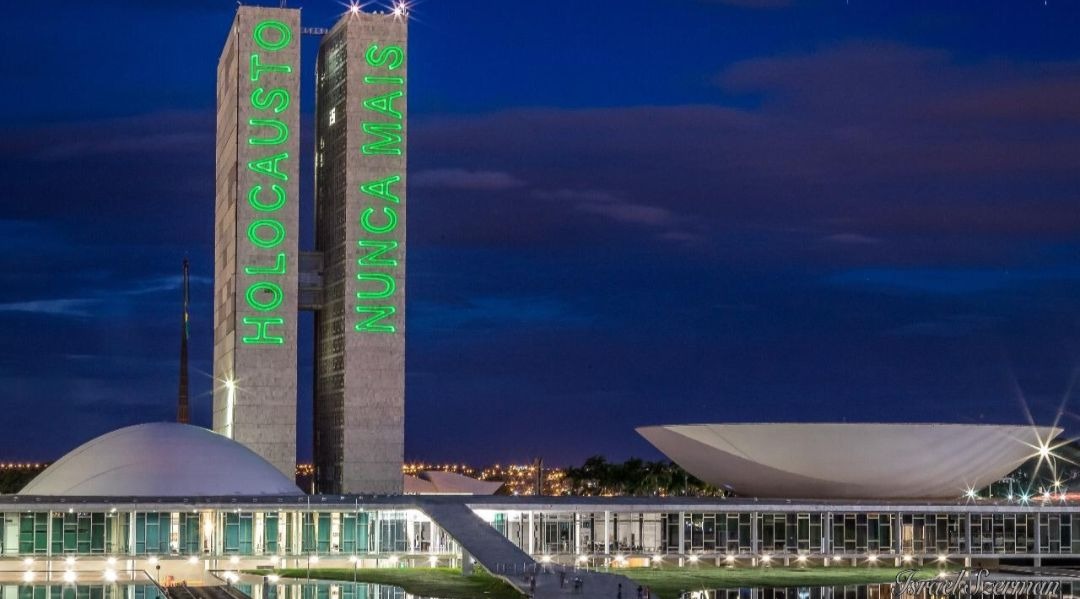 A message for Yom Hashoah, or Holocaust Remembrance Day, is laser-projected on the Brazilian National Congress buildings in Brasilia, May 1, 2019. (Courtesy of Israel Szerman)
Advertisement

It was the second straight year that the green block letters covered the 300-foot tall facade of both 28-story twin towers of the Congress, Brasilia’s most famous landmark, on Wednesday night. The unprecedented honor to mark Holocaust Remembrance Day in the country’s capital city was proposed by the president of the Senate, Davi Alcolumbre, who is Jewish.

“The initiative is a tribute to the memory of the six million Jews exterminated by the Nazis during World War II, in the darkest episode in modern history,” the group said in a statement. “It also remembers the spirit of resistance of those who managed to rebel in some concentration camps.”

Brazilian President Jair Bolsonaro came under fire last month for saying that the crimes of the Holocaust can be forgiven.

“We can forgive, but we cannot forget,” Bolsonaro reportedly said at a meeting with evangelical pastors in Rio. “Those who forget the past are condemned to not have a future,” added the ardently pro-Israel Christian, who visited Israel in March and had a private tour of the Yad Vashem Holocaust memorial in Jerusalem.