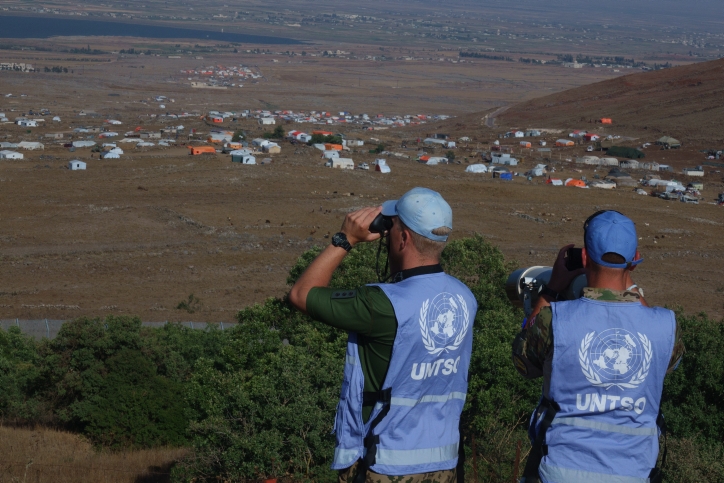 United Nations workers standing on the Israeli side of the Golan Heights monitor a Syrian refugee camp in Quneitra province on the Syrian side of the Israeli-Syrian border on July 17, 2018. (Basel Awidat/FLASH90)
Advertisement

Three Syrian national soldiers and seven foreign nationals were killed in the attacks on military positions in the southern region of Quneitra, near the Golan Heights, the state-run SANA news agency reported.

The Israel Defense Forces confirmed that it struck the targets early on Sunday morning, including two artillery batteries, observation and intelligence posts, and an SA-2 aerial defense battery.

“We hold the Syrian regime accountable and will firmly operate against any attempt to harm Israeli civilians,” the IDF said in a statement.

At least two rockets were fired from Syria toward Mt. Hermon in the Golan Heights, a popular tourist area, late on Saturday night. No injuries or damage were reported. Rocket warning sirens were not activated, meaning that the rockets were headed for unpopulated areas.

Israeli Prime Minister Benjamin Netanyahu, who also serves as Defense Minister, said Sunday morning in a statement: “Yesterday I held security consultations in wake of the firing at the Golan Heights in which I instructed the IDF to take strong action. We are not prepared to tolerate firing at our territory and will respond with great force to any aggression against us. This has been my consistent policy and this is what we will continue to do for the security of Israel.”

We hold the Syrian regime accountable and will firmly operate against any attempt to harm Israeli civilians. pic.twitter.com/XtDTqz7Btc