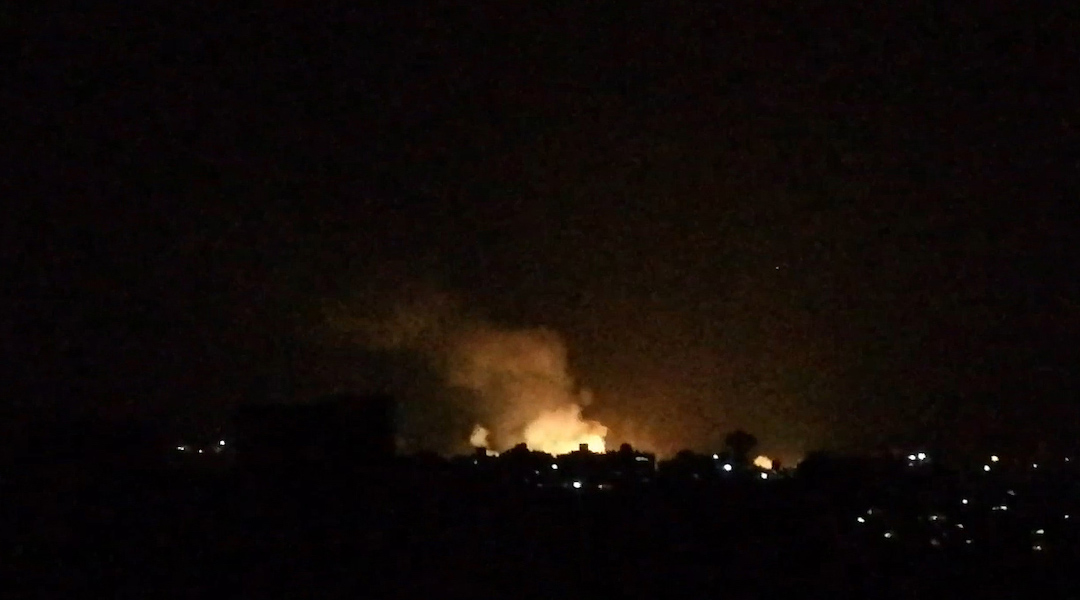 JERUSALEM (JTA) — Israeli airstrikes hit Syrian and Iranian targets in Syria, killing at least 15 people, including six civilians, according to the Syrian media and a watchdog group.

The Britain-based Syrian Observatory for Human Rights reported that the attacks Sunday night were near Damascus and Homs, and three children were among those killed. One of the nine soldiers was reported to be Syrian and the others were of a foreign nationality, the observatory said.

“Israeli warplanes and warships hit targets of the regime’s army and of the Iranian militiamen and the Lebanese Hezbollah within both countryside of Damascus and Homs,” the report said, adding that “at least 10 targets have been hit in the vicinity of the capital Damascus.”

Among the targets, according to the report, were the headquarters of a regiment of the Iranian Revolutionary Guards, a research center, and military positions of the Lebanese Hezbollah.

Syrian air defenses brought down a number of the missiles, the state-run SANA news agency reported.

A Syrian anti-aircraft missile that was fired at Israeli jets reportedly landed in Cyprus, north of Nicosia. No casualties were reported.

The Israel Defense Forces has not commented on the reports. While Israel previously has neither confirmed nor denied such strikes, the government and the military have been more direct in recent months about acknowledging airstrikes on Syria, usually targeting bases linked with Iran.

The observatory reported that since April, Israeli forces have carried out seven attacks on military sites belonging to Syrian regime forces and their militias, the Iranian forces and their gunmen in several areas in Syria, killing 31, including 25 Iranians.