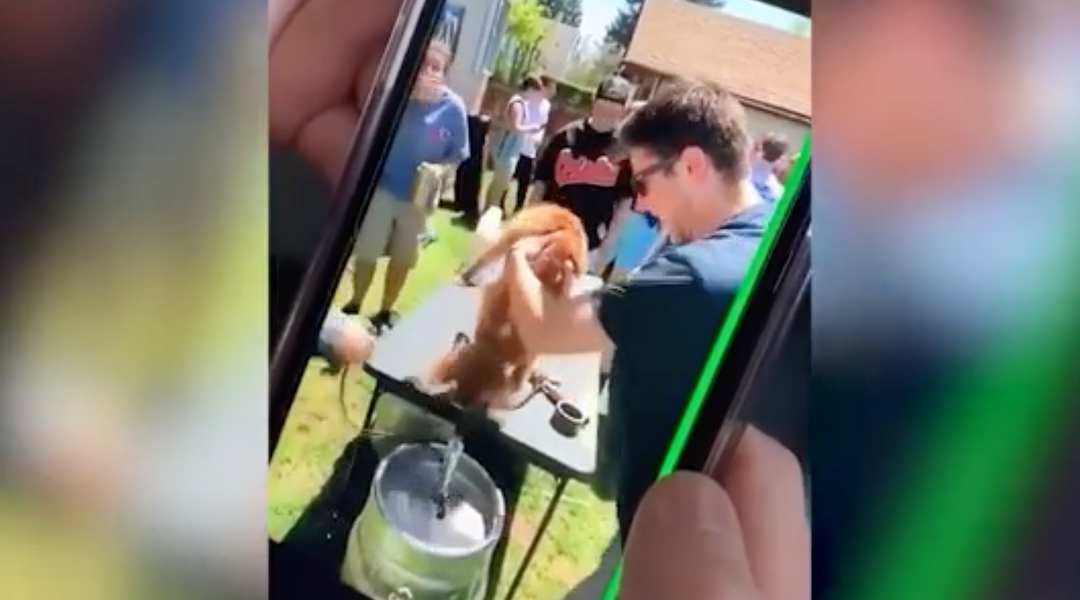 Alpha Epsilon Pi brothers tried to get this dog to drink beer. (Screenshot from Twitter)
Advertisement

(JTA) — A historically Jewish fraternity at a university on New York’s Long Island has been suspended after a video showing members forcing a dog to drink beer was shared on social media.

The Alpha Epsilon Pi chapter at Hofstra University was suspended on Monday.

The five-second video that was posted on Snapchat was taken at an off-campus keg party on Saturday night, CBS New York reported. It also was posted to Twitter. It shows college students holding the dog in the air over a keg and trying to force beer in its mouth.

so apparently it’s okay to force dogs to drink beer even though it can kill them???? @HofstraU @AEPi pls do better @peta pic.twitter.com/u8Wx78MUfL

The dog is owned by a 21-year-old senior at the university.

Alpha Epsilon Pi International said in a statement that it has placed the chapter “on ‘cease and desist’ due to suspected violations of our health and safety policies.” The suspension is pending an investigation into the incident.

“We hope that we are able to use this as a teaching moment to help build better young men who are committed to our policies and our mission of developing the future leaders of the world’s Jewish communities,” Jon Pierce, a spokesman for Alpha Epsilon Pi, said in a statement to The Washington Post.

Hofstra condemned the incident, saying the students violated its code of conduct, according to CBS New York.

The Nassau County Society for the Prevention of Cruelty to Animals has also launched an investigation into the incident, and took the dog into its care, The Washington Post reported. It will be returned to its owner, however, police told CBS New York.