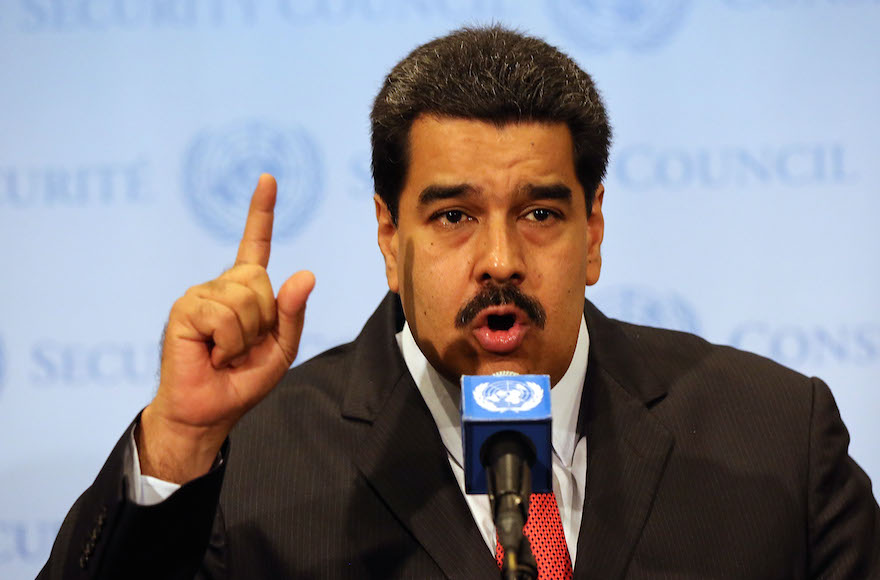 BUENOS AIRES, Argentina (JTA) — The president of Venezuela, Nicolas Maduro, called the self-declared interim president and opposition leader Juan Guaido “a CIA agent who serves the interests of the United States and the Zionists” in an interview with the Hezbollah-affiliated Lebanese media group, Al Mayadin.

He added in the interview posted on Tuesday that he feels “love for the noble Palestinian cause,” and sent words of “encouragement to the Palestinian and Arab prisoners confined in Israeli jails.”

Maduro denied that there are Hezbollah operatives acting in Venezuela. And he blamed the United States for trying seize the wealth and oil of Venezuela.

Guaido, the president of the National Assembly of Venezuela, on Jan. 23 declared himself the country’s interim president and called on Maduro to order new elections.

The United States, the European Union and other world leaders maintain that Maduro’s re-election last year was fraudulent. The country’s military remains loyal to Maduro, however.

Hezbollah backed Maduro as president after Guaido announced his takeover.

“It is a farce that Maduro uses Hezbollah-related media to deny that the Iranian-backed terrorist movement is using Venezuela as a hub for activity across Latin America,” Shimon Samuels, director for International Relations at the Simon Wiesenthal Center, said in a statement.

The Wiesenthal Center, using the research of assassinated Argentine prosecutor Alberto Nisman, reported that there were 90 Hezbollah sleepers in that country and probably more in Venezuela after former Venezuelan Vice President Tarek El Assaimi granted more than 150 Venezuelan passports to members of Hezbollah “who knew no Spanish,” Samuels said.