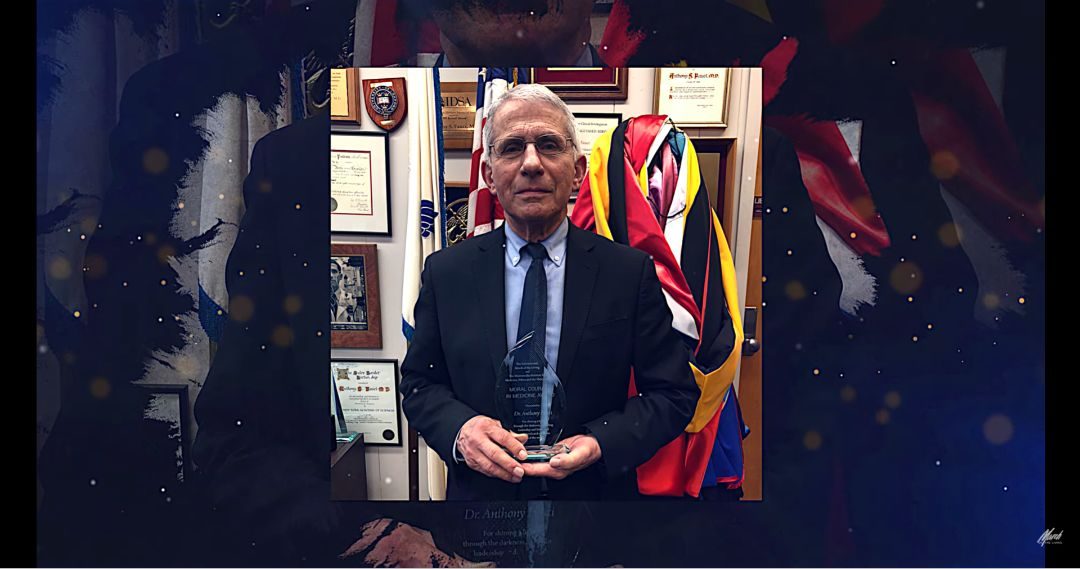 Dr. Anthony Fauci poses with an award from the March of the Living in a broadcast posted by the Holocaust remembrance group, April 7, 2021. (YouTube)
Advertisement

(JTA) — Drawing a line between its mission of Holocaust remembrance and the ravages inflicted by the coronavirus pandemic, the March of the Living honored Dr. Anthony Fauci with an award for “moral courage in medicine” on the eve of Yom Hashoah, Israel’s Holocaust commemoration day.

The award to Fauci, who for decades has been the top U.S. official handling infectious diseases, culminated in an online program on Wednesday called “Medicine and Morality.”

In his acceptance remarks, Fauci referred to Maimonides, the medieval Jewish scholar and physician.

“Maimonides reminded us that goodness and evil coexist, but that we are free to choose one over the other,” Fauci said. “I believe that the healing arts lie on the path of goodness, the same path, all of you have chosen in remembering and listening to the voices of those who perished in the Holocaust.”

Fauci has faced a barrage of criticism, notably from Republicans including former President Donald Trump, for his warnings about neglecting recommended public health practices, including mask-wearing and social distancing, to limit the pandemic’s spread.

Brian Strom, the chancellor of Rutgers University, which joined the March of the Living, the Maimonides Institute for Medicine, Ethics and the Holocaust, and the Shoah Foundation in organizing the event, alluded to attacks on figures like Fauci from skeptics of the potency of the coronavirus pandemic.

“We’re very fortunate to have one guiding light throughout the pandemic,” Strom said. “In an era when public-spiritedness and confidence in the disciplines and methodologies of science, were not held up as virtues of high esteem, Dr. Anthony Fauci embodied both.”

The program broadcast on YouTube is among several virtual events that the March of the Living is substituting during the pandemic for its annual educational program in Israel and Poland, which includes a nearly 2-mile march at the site of the Auschwitz death camp. According to the March of the Living, Wednesday’s symposium was meant to launch a long-range project on medicine, ethics and the Holocaust.

Presentations by historians, physicians and philosophers described the depredations of physicians who collaborated with the Nazis, and also the heroics of doctors who resisted the Nazi rise.

Albert Bourla, the CEO of Pfizer, the first pharmaceutical company to bring a successful coronavirus vaccine to market, described how his parents, Jews in Thessaloniki, survived the Holocaust. Mois and Sara Bourla were among 2,000 survivors from the Greek port city, which had been home to more than 50,000 Jews before the Holocaust.

“My parents talked about it a great deal,” he said. “They did this because they wanted us to remember. To remember the lives that were lost, to remember what can happen when the virus of evil is allowed to spread. But most importantly, to remember the value of a human life.”