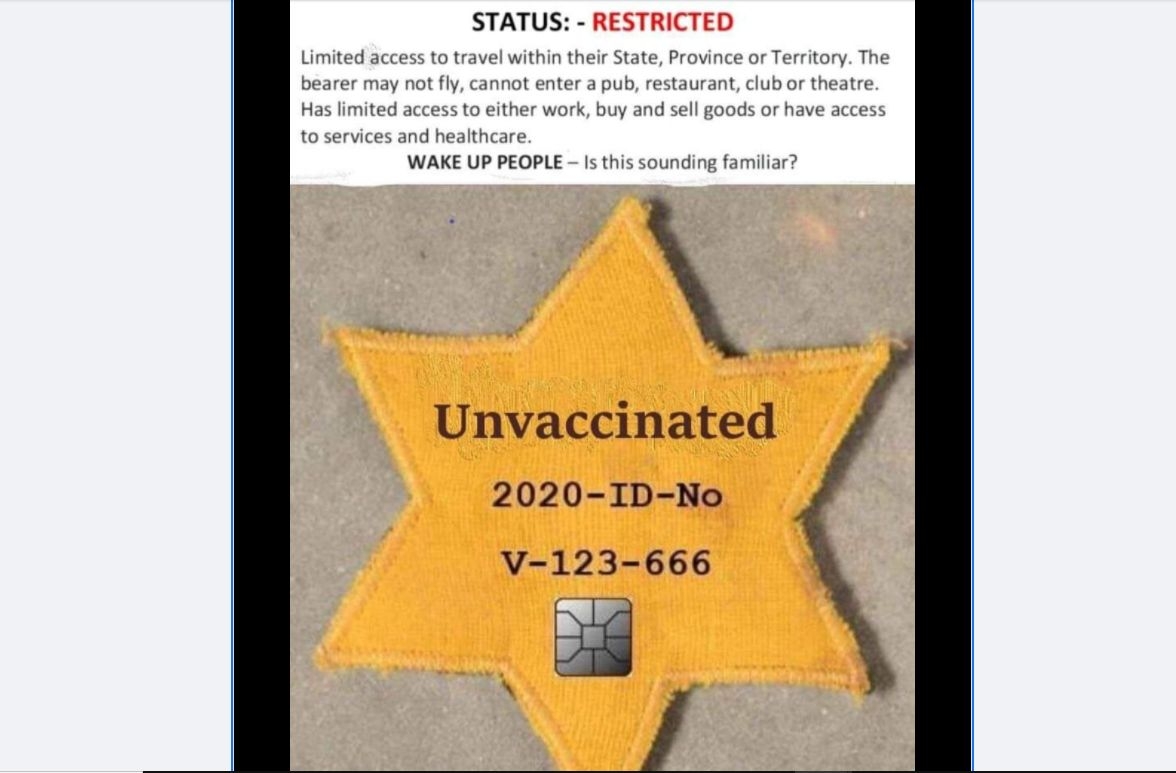 A post on the Oklahoma GOP's Facebook page used a yellow star to liken coronavirus restrictions to the Holocaust, appearing on July 30, 2021. (Screenshot)
Advertisement

(JTA) — The chairman of the Oklahoma Republican party is the latest Republican figure to liken coronavirus restrictions to the Nazi period.

John Bennett on Friday posted on the party’s Facebook page a photo of a yellow star labeled “Unvaccinated.” He listing purported restrictions on the unvaccinated, including not being able to fly or “enter a pub, restaurant club or theater,” as well as limited access to work, services and healthcare.

“WAKE UP PEOPLE — is this sounding familiar?” the caption said. Below, in comments, were links to fundraising websites for the state GOP.

There are no such vaccine mandates in Oklahoma, and the posting drew immediate condemnation from the state’s top Republicans, the Oklahoman reported. Critics included the governor, the lieutenant governor, a U.S. representative, the leaders of both chambers in the Oklahoma legislature, and Bennett’s deputy.

Also condemning the posting was the Oklahoma City Jewish federation. “To compare the actions taken by Nazi Germany to a public health discussion is ill-informed and inappropriate,” the federation said Saturday on its Facebook page. “It is sad and ironic that anyone would draw an analogy from the largest recorded genocide in the 20th century with public health attempts to save lives.”

The federation thanked State Republicans for quickly condemning the posting.

A number of Republicans have since the beginning of the coronavirus pandemic compared efforts to control the virus to Nazi policies, drawing criticism from Jewish groups.

Bennett doubled down on the comparison, the Oklahoman reported, recording a video that once again ended in a fundraising appeal.

The Nazis “gave [Jews] a star to put on, and they couldn’t go to the grocery store, they couldn’t go out in public, they couldn’t do anything without having that star on their shirt,” The Washington Post quoted Bennett as saying. “Take away the star and add a vaccine passport.”

The Post reported that Bennett, during a stint from 2011-2019 in the Oklahoma House, once called Islam “a cancer in our nation that needs to be cut out.” He required Muslim constituents seeking appointments to meet him to answer a questionnaire with 18 questions, including ” “Do you beat your wife?”