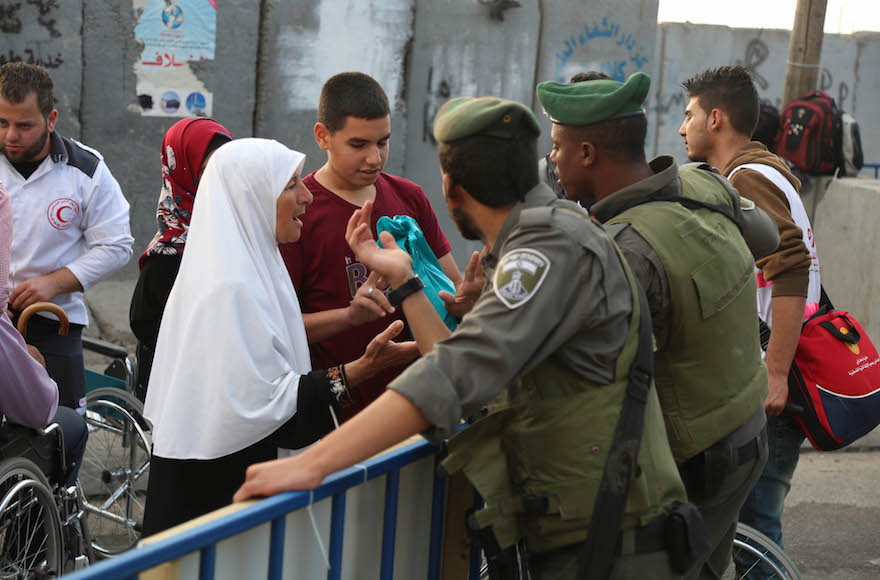 Palestinian women trying to cross the Qalandiya checkpoint on their way to Friday prayers at the Al-Aqsa Mosque in the second week of Ramadan in the West Bank city of Al-Ram, June 26, 2015. (Flash90)
Advertisement

JERUSALEM (JTA) — A Palestinian woman was shot and killed at a West Bank checkpoint after she pulled out a knife and tried to stab an Israeli police officer.

The woman killed at the Qalandiya checkpoint in northern Jerusalem was identified as Alaa Wahdan, 28, from the nearby Qalandiya refugee camp, Haaretz reported. The Palestinian Maan news agency reported that the woman was 50.

She entered a vehicle lane at the checkpoint and ignored calls from police to halt.

Video of the incident was later posted on social media.

“Security personnel who saw that she was approaching them performed the proper arrest procedures and called for her to stop,” police said in a statement published in The Times of Israel. “She did not respond to their calls and took out a knife. As a result of this, a shot was fired at her leg and she was injured.”

The woman was pronounced dead at Hadassah Hospital Mount Scopus in Jerusalem, The Times of Israel reported, citing the medical center.