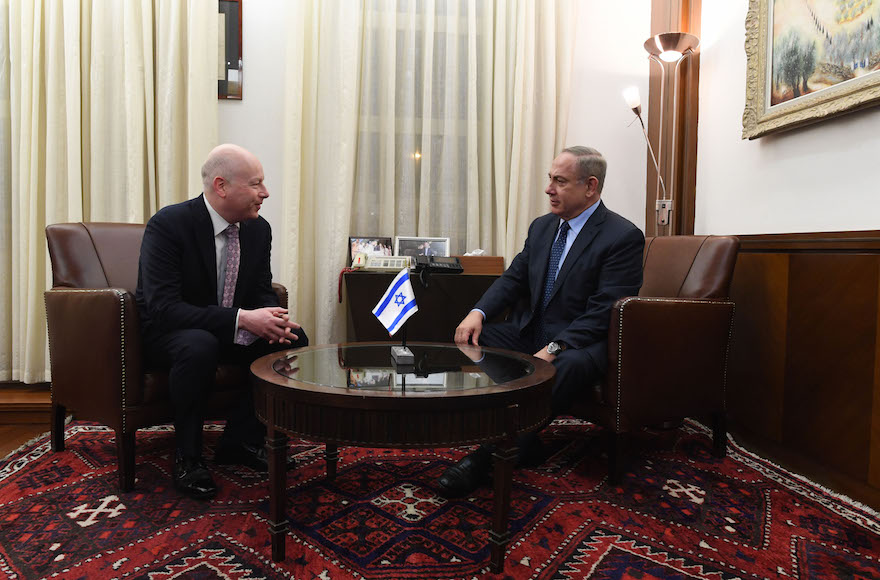 (JTA) — Washington officials denied a report out of Israel that the Trump administration’s still under-wraps Middle East peace plan includes a Palestinian state on most of the West Bank with its capital in eastern Jerusalem.

“As in the past, speculation with regards to the content of the plan is not accurate. We have no further comment,” an unnamed White House official told media outlets.

But Trump’s Middle East peace negotiator, Jason Greenblatt, went one step further, saying in a tweet about the report Wednesday on Israel’s Channel 13 that “Speculation about the content of the plan is not helpful. Very few people on the planet know what is in it … for now …

“Over the coming period, unnamed sources will peddle narratives to the media and others based on motivations that are far from pure,” Greenblatt continued. “Peddling false, distorted or biased stories to the media is irresponsible & harmful to the process. Israelis & Palestinians deserve better.

“I highly recommend that people listen only to official statements directly from” President Donald Trump; David Friedman, the U.S. ambassador to Israel; Jared Kushner, Trump’s son-in-law and the leader of the peace process team “or me about the plan,” Greenblatt said.

It is not the first time that Greenblatt has taken to Twitter to deny reports that claim to be familiar with the contents of the peace deal.

The report cited the notes of an unnamed source briefed by the Americans. It said the plan includes Israel annexing West Bank settlement blocs and evacuating illegal outposts deep inside the West Bank. Eastern Jerusalem would be under Israeli sovereignty with the joint management of the Palestinians and Jordan and with most Arab neighborhoods under Palestinian rule as the capital of Palestine.

It is not known when the plan will be rolled out, with speculation that it will not be before Israel’s national elections on April 9.