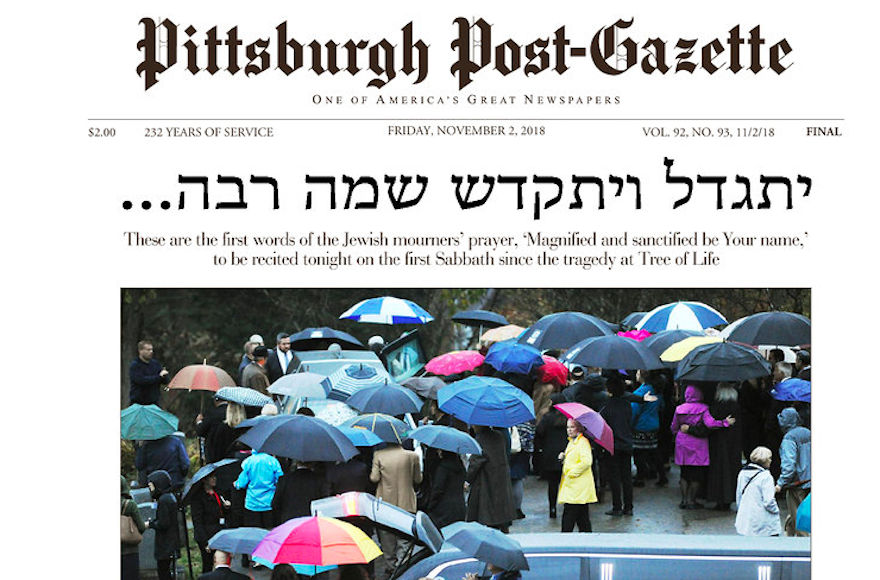 The Pittsburgh Post-Gazette honored victims of the Tree of Life Synagogue shooting by publishing the opening words of the Kaddish prayer on its cover on Nov. 2, 2018. (Post-Gazette)
Advertisement

(JTA) — The Pittsburgh Post-Gazette was awarded the 2019 Pulitzer Prize in breaking news reporting for its coverage of the Tree of Life synagogue massacre last October.

Eleven people were shot and killed by a gunman during the rampage, which came as congregants at the synagogue complex in Pittsburgh were gathering for Shabbat morning services. The prize, the most prestigious in journalism, was awarded to the daily’s entire reporting staff on Monday.

The prize committee cited the Post-Gazette for “immersive, compassionate coverage of the massacre at Pittsburgh’s Tree of Life synagogue that captured the anguish and resilience of a community thrust into grief.”

Among the 10 stories cited was an investigative profile of the gunman and how he went “from conservative to white nationalist.”

The coverage also included a front-page headline containing the first four words of the Mourner’s Kaddish prayer in Hebrew letters.

David Shribman, the Post-Gazette’s since-retired executive editor, explained the excerpt “from a 10th century prayer might be the appropriate gesture — of respect, of condolence — for a 21st century audience mourning its dead, whether family, friend, congregant, neighbor or, simply, Pittsburgher.”

The Sun Sentinel of South Florida won the Pulitzer for public service, for its coverage of the shooting at Marjory Stoneman Douglas High School in Parkland. Multiple Jewish students and staff were among the 17 killed in the shooting.