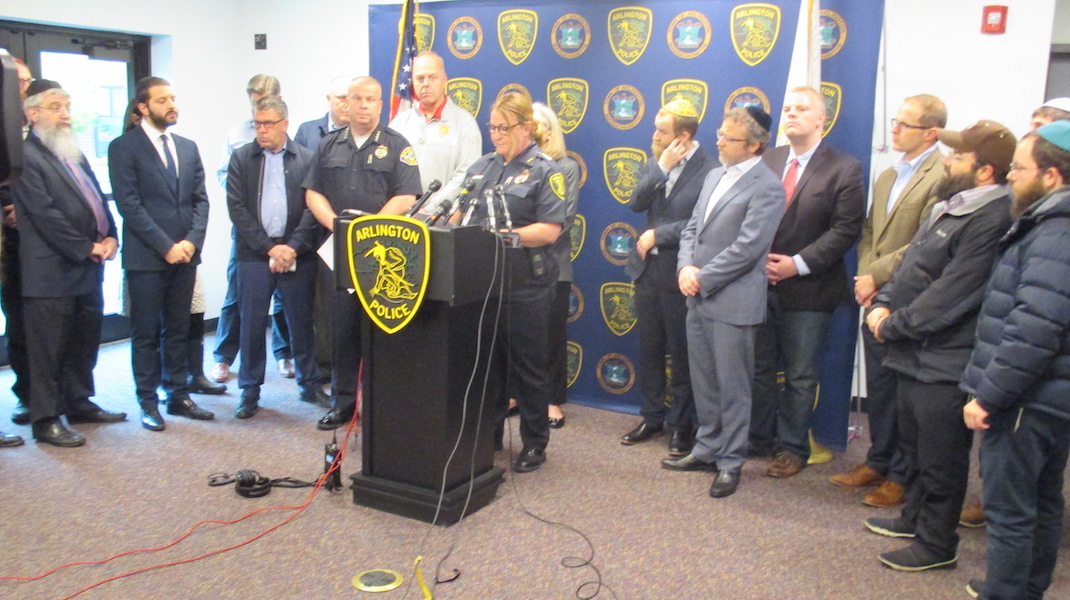 That brings to three the number of suspicious fires since last Saturday night, when a blaze damaged outside shingles at the Bukiets’ home. The house in Arlington was hit again on Thursday night, about an hour before the incident in Needham, about an hour away.

Local and state law enforcement and fire officials are coordinating their investigations, and including the possibility that the fires are hate crimes.

The Needham Chabad is the residence of Rabbi Mendy Krinsky and his family. No one was hurt in the fires and the damage was minimal.

Arlington’s acting chief of police, Julie Flaherty, addressed the local media at a news conference Friday at the town’s Police Department. The fires, set on the shingles on the outside of both homes, are similar in nature.

“We can’t rule out that they are connected,” Flaherty said, standing among more than 15 local and state officials, Avi Bukiet and his wife, Luna, other Chabad leaders and representatives from Boston’s Jewish community.

John Schlittler, chief of police from Needham, said his town’s investigation is being conducted in coordination with the State Police. One local media outlet reported that the state’s joint terrorism task force, which includes federal agents, is assisting in the investigation.

A $15,000 reward was announced by Robert Trestan, direction of the New England office of the Anti-Defamation League, adding to a $5,000 reward by the state’s fire marshal, for information that leads to a conviction in the fires.

“It is important for this to be resolved quickly,” Trestan urged, saying that the attacks are not just on Jewish houses of worship but on the rabbis’ homes.

Earlier in the day, Chanie Krensky of the Needham Chabad center described on Facebook her fright when she smelled smoke outside her home and how Rabbi Krensky extinguished the fire before the fire alarm was set off.

“Somebody out there wants to hurt us. Just because we exist. And that is frightening. Hate can’t be reasoned with. Hate just needs to be eradicated. A little bit of light dispels a lot of darkness,” she wrote.

“The Jewish community is unified” in standing together against these attacks, Jeremy Burton, the director of the Jewish Community Relations Council of Greater Boston, said at the Friday news conference.

State Police spokesman David Procopio confirmed that his agency’s Fire Investigation Unit and Fusion Center are assisting in the investigation, as are troopers and federal agents assigned to the Joint Terrorism Task Force.