In Israel, Pompeo makes historic moves, including first visit to West Bank settlement for a secretary of state 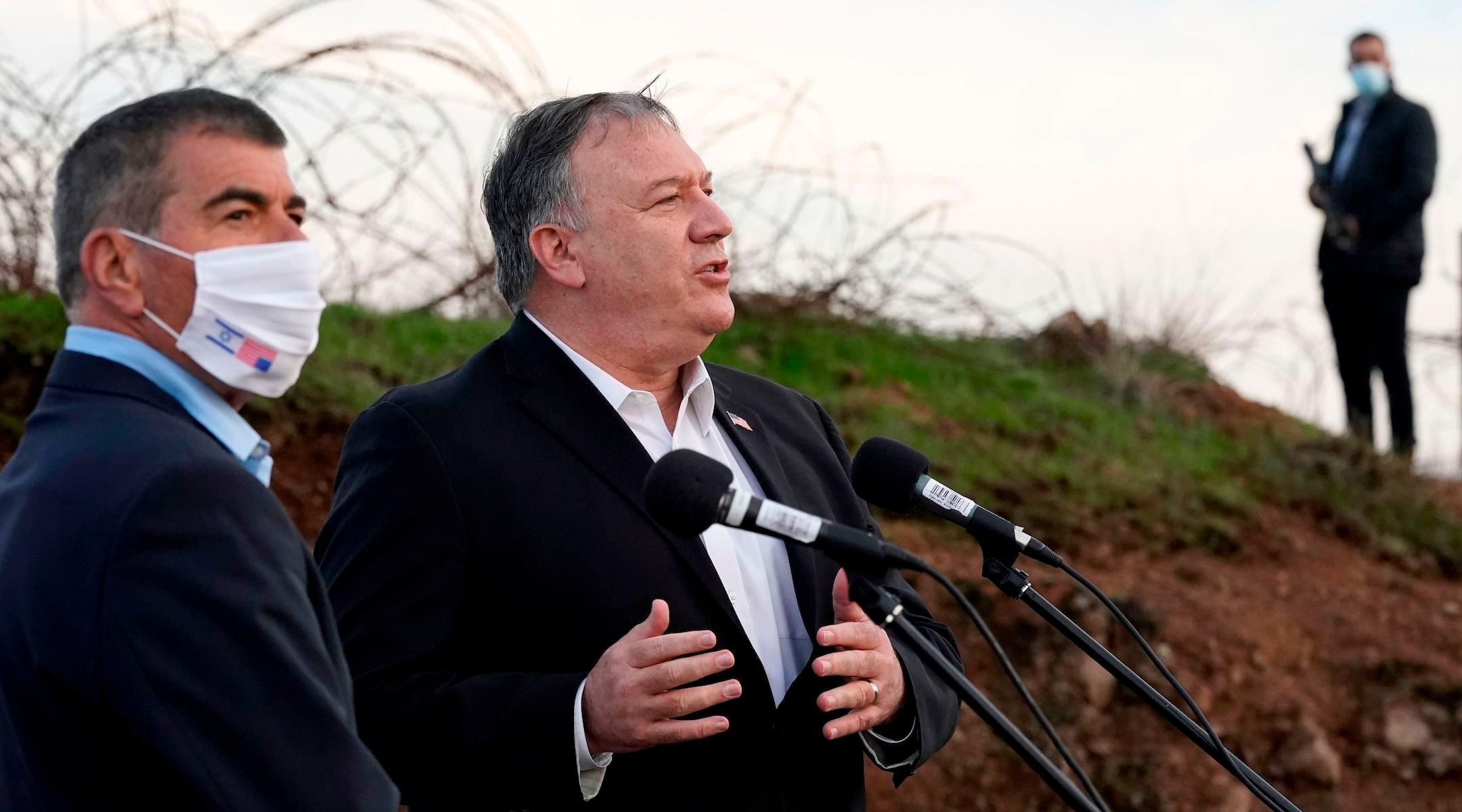 Secretary of State Mike Pompeo speaks alongside Israeli Foreign Minister Gabi Ashkenazi after a security briefing on Mount Bental in the Israeli-annexed Golan Heights on the border with Syria, Nov. 19, 2020. (Patrick Semansky/Pool/AFP via Getty Images)
Advertisement

(JTA) — Mike Pompeo became the first U.S. secretary of state to visit an Israeli settlement in the West Bank on Thursday.

At a news conference in Jerusalem with Israeli Prime Minister Benjamin Netanyahu, Pompeo also said that the Trump administration will cut ties with any groups that support the boycott Israel movement, which the U.S. will officially consider anti-Semitic.

Later in the day, he visited the Psagot winery in a settlement near Ramallah, the Palestinian Authority’s capital, and his office announced that the State Department will enforce that goods produced in places in the West Bank “where Israel exercises full control” will be labeled “Made in Israel” when sold in the U.S. The international requirement since 1995 has been to label such goods as made in the West Bank.

He also visited the Golan heights, which most of the international community sees as occupied territory, and spoke from a hilltop. The State Department recognized the territory as part of Israel last year.

Netanyahu applauded the series of historic moves as “wonderful,” while the Palestinians condemned them.

“[T]he State Department took the wrong view of settlements. It took a view that didn’t recognize the history of this special place,” Pompeo said. “And instead, now, today the United States Department of State stands strongly to the recognition that settlements can be done in a way that are lawful and appropriate and proper.”

Prior U.S. administrations have seen settlement expansion as an impediment to peace and a two-state solution to the Israeli-Palestinian conflict.

On BDS, or the Boycott, Divestment and Sanctions movement, Pompeo added that “we will immediately take steps to identify organizations that engage in hateful BDS conduct, and withdraw US government support for such groups.”

The movement “urges action to pressure Israel to comply with international law” in regards to its occupation of land in the West Bank, but many critics say it is built on anti-Zionist and anti-Semitic concepts.

While at the winery, which has named a vintage after him, Pompeo wrote in the visitor’s book that he hopes he will not be “the last secretary of state to visit this beautiful land.”

Correction: This article originally cited an incorrect claim in a New York Times article that Pompeo was the first U.S. secretary of state to visit the Golan Heights.