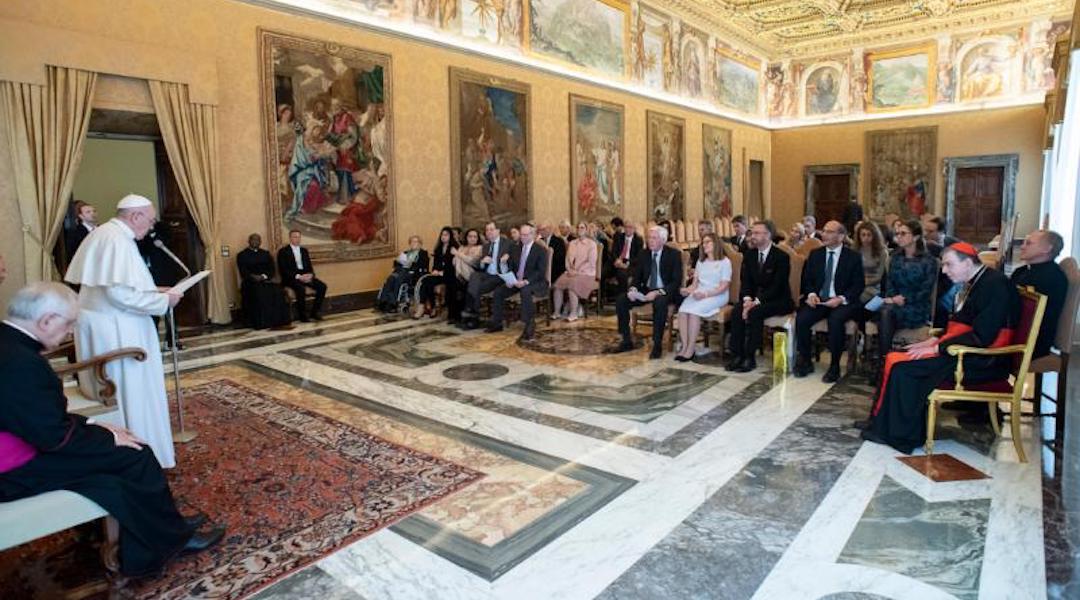 Pope Francis meets with a delegation from the American Jewish Committee at the Vatican on International Women's Day, March 8, 2019. (Vatican Media)
Advertisement

(JTA) — Pope Francis used an audience with the American Jewish Committee to praise the role of women in the world and renew his longstanding condemnation of anti-Semitism.

In the private audience Friday – International Women’s Day – he highlighted the “irreplaceable contribution of women in building a world that can be a home for all.”

Women, he said “make the world beautiful, they protect it and keep it alive. They bring the grace of renewal, the embrace of inclusion, and the courage to give of oneself. Peace, then, is born of women, it arises and is rekindled by the tenderness of mothers. Thus the dream of peace becomes a reality when we look towards women. … If we take to heart the importance of the future, if we dream of a future peace, we need to give space to women.”

The pope made similar remarks last month at a meeting to address the church’s handling of child abuse by priests. He welcomed a speech by the first woman to deliver a presentation at a meeting like it. U.S. women leaders within the Catholic Church have urged the Vatican to more forcefully address the abuse of children and women.

Regarding anti-Semitism, the pope told the Jewish leaders at the Vatican meeting of his “great concern” about “an excessive and depraved hatred” spreading in many places around the world.

“I think especially of the outbreak of anti-Semitic attacks in various countries,” he said. “I stress that for a Christian, any form of anti-Semitism is a rejection of one’s own origins, a complete contradiction.”

Francis praised the impact of interfaith dialogue to educate about and combat hatred.

The 35-member AJC delegation was led by the group’s president, John Shapiro. In his remarks to the pope, Shapiro expressed appreciation for the pontiff’s announcement this week that the Vatican Archives covering the papacy of Holocaust-era Pope Pius XII will be opened to researchers in 2020.

Critics accuse Pius of having turned a blind eye to Jewish suffering in the Shoah, while the Vatican has long maintained he worked behind the scenes to save Jews.

“We look forward especially to the involvement of the leading Holocaust memorial institutes in Israel and the U.S. to objectively evaluate as best as possible the historical record of that most terrible of times, to acknowledge both the failures as well as valiant efforts during the period of the Shoah,” Shapiro said, according to an AJC news release.