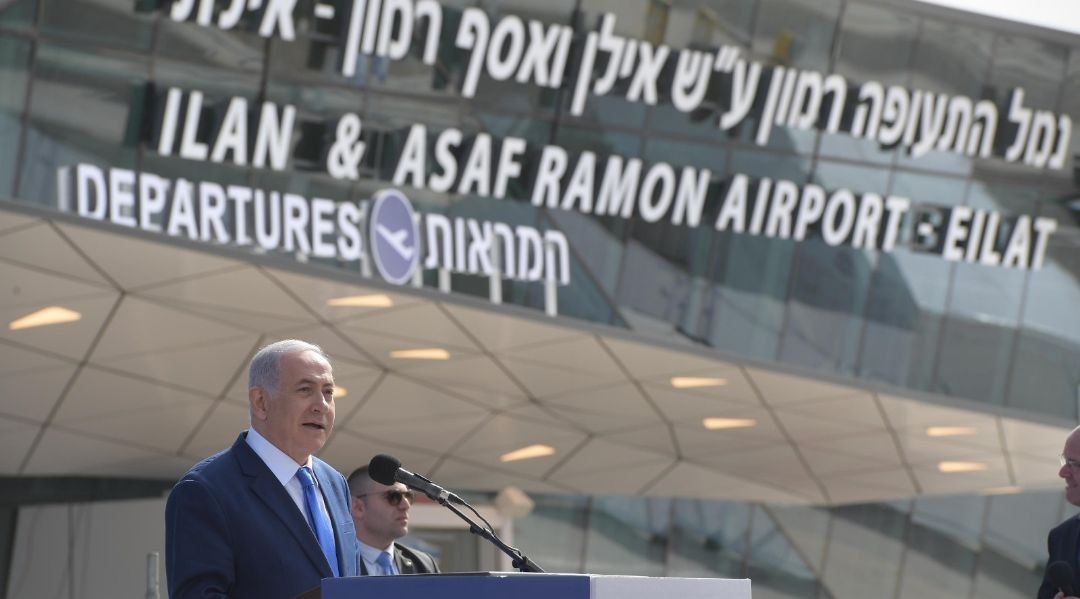 Prime Minister Benjamin Netanyahu at the opening of the Ramon International Airport in the Timna Valley in southern Israel on Jan. 21, 2019. (Amos Ben-Gershom/ GPO)
Advertisement

The airport, named for Ilan and Asaf Ramon, was dedicated on Monday. The first flights, domestic and charter only, will begin arriving at the airport early next month. International flights will begin in September or October of this year.

The airport, in the Timna Valley in southern Israel about 10 miles north of Eilat, will replace the old Eilat City Airport. A rail line is planned to carry travelers from the resort town to the airport. Until it is built shuttles will ferry them.

Shuttle connections also are planned for tourists heading to the Jordanian resort of Aqaba, and areas of Wadi Rum and Petra in Jordan, as well as the Taba area of Sinai in Egypt. Shuttles are also eventually expected to Egypt and Jordan, according to the airport’s website.
The Ramon Airport is set to handle up to 2 million passengers a year upon opening, with expansion allowing a capacity of up to 4.2 million passengers by the year 2030, according to the airport’s website.

Among the airlines that will begin using the airport are Ryanair, WizzAir, easyJet, Transavia, SAS, Finnair, Edelweiss, and Ural Airlines.