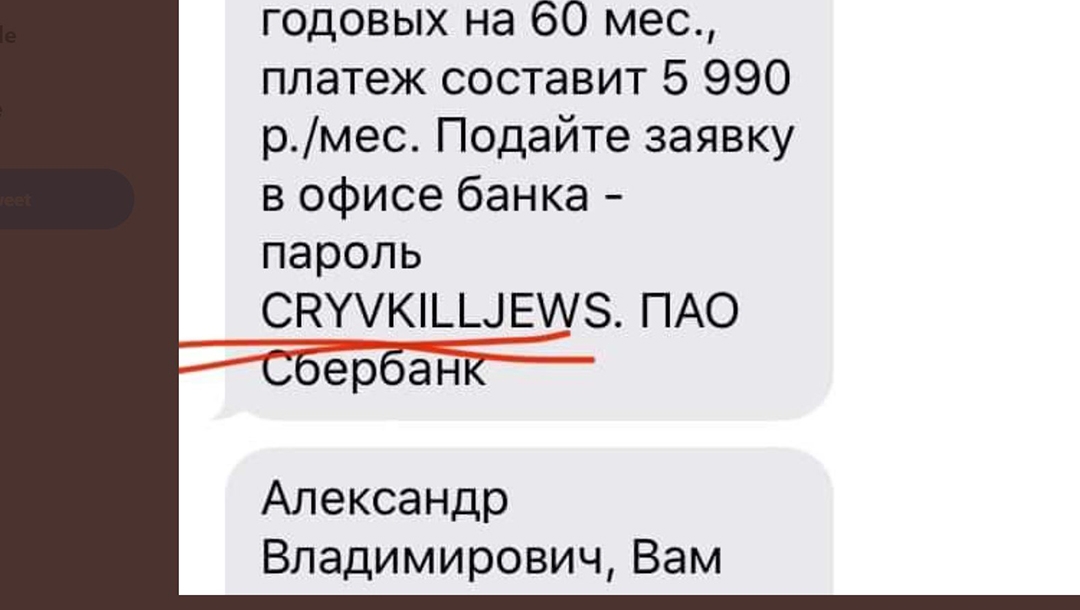 (JTA) — A Russian state-owned bank sent to one of its clients a promotional code that contained the phrase “Kill Jews.”

Artem Chapaev, a former creative consultant at Amnesty International from Moscow, on Wednesday posted on Twitter a screen shot of the password, which he received as a text to his smartphone from Sberbank.

The code was in Russian but the Latin alphabet letters that comprised the code were: “CRYVKILLJEWS.”

As his tweet began being shared, Sberbank, which is 51 percent owned by the Central Bank of Russia, claimed the image was doctored and not authentic.

“The screenshot clearly shows that the password has been edited. So someone obviously wants to set us up,” the person handling the bank’s Twitter feed wrote.

But after a short while, Sberbank recognized the image’s authenticity and said it was the result of random code generation, Jewish.ru reported. The report did not say whether Chapaev was Jewish.

“This is really no Photoshop. We are surprised ourselves, but this situation is pure coincidence. Our code generator didn’t mean to offend anyone,” the bank wrote.

The incident coincided with the publication of an Anti-Defamation League survey of 9,000 people in Europe and beyond that suggested that the prevalence of anti-Semitic sentiment in Eastern Europe, including Russia, has risen significantly since 2015.

Whereas that year only 23 percent of respondents in Russia agreed with anti-Semitic statements presented to them in the poll, this year the figure was 31 percent.