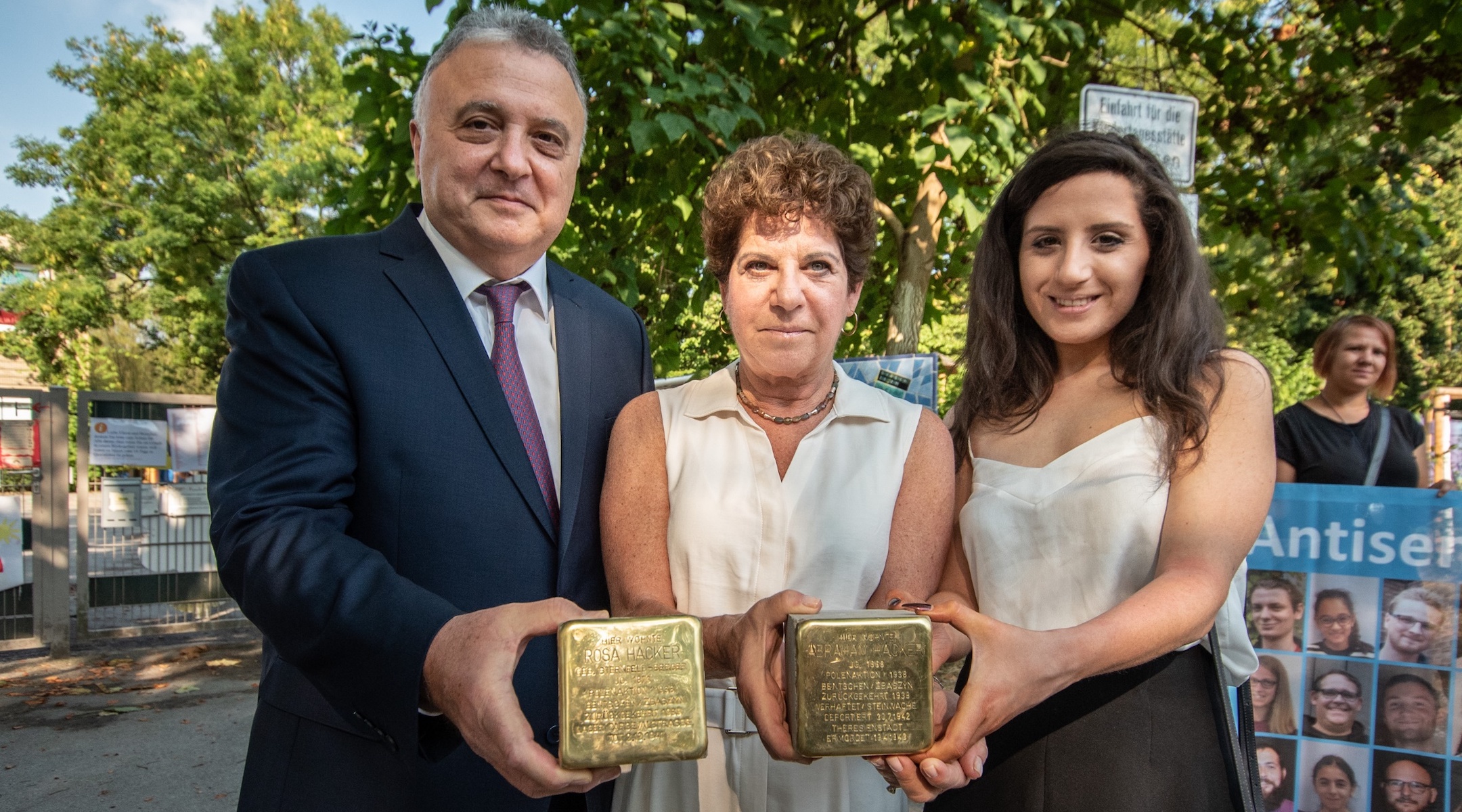 Laura Kam, center, holding the stumbling block memorials for her great-grandparents together with her husband, Israel's Ambassador to Germany Jeremy Issacharoff, and their daughter Ella Issacharoff. (City of Dortmund/ Roland Gorecki)
Advertisement

(JTA) – Rosa and Abraham Hacker refused to leave their beloved city of Dortmund even when life for Jews in Germany was starting to become dangerous in the 1930s.

Now “stumbling stone” Holocaust memorials have been installed in the city remembering the couple – the maternal great-grandparents of Laura Kam, the wife of Israel’s ambassador to Germany, Jeremy Issacharoff.

The two small brass blocks, called “stolpersteine,” were installed Monday in ceremonies led by Dortmund Mayor Ullrich Sierau and a local rabbi under tight security. Kam and Issacharoff attended with their daughter, Ella.

The Hackers died in the Holocaust, but their five children managed to flee.

Kam decided to commission the memorial following years of research into her family history filled with obstacles. Once her husband was posted to Germany in 2017, however, “the gates to archives opened and I am literally looking at 1,000 pages,” she told the Jewish Telegraphic Agency in a telephone interview.

There are nearly 80,000 such memorials in Germany and elsewhere in Europe; the brass blocks are etched with dates of birth and death.

The Cologne-based artist Guenther Demnig launched the memorials project in 1992. He paused installations for a couple of months due to measures designed to combat the coronavirus pandemic, but resumed in June.

Kam’s great-grandparents, natives of Poland, had moved from Poland to Dortmund in the early 20th century, where they established a successful brush-making factory. The Hackers were deported to their native land along with other Polish-born Jews in 1938, but managed to return to Dortmund, where they found that their property had been plundered.

Rosa died in 1941 in the Dortmund Ghetto, and her husband was murdered in 1943 in the Theresienstadt concentration camp in the former Czechoslovakia.

Kam, whose mother, Sonia, was born in Dortmund, decided to apply for the memorial after encountering stumbling blocks in Berlin. Pandemic concerns prevented Sonia Kam, who lives in the New York metropolitan area, from attending the ceremony.

Kam told that JTA she is “extremely concerned” about increasing anti-Semitism in Germany, but also heartened that local governments, such as that in Dortmund, “are fighting extremism so valiantly.”