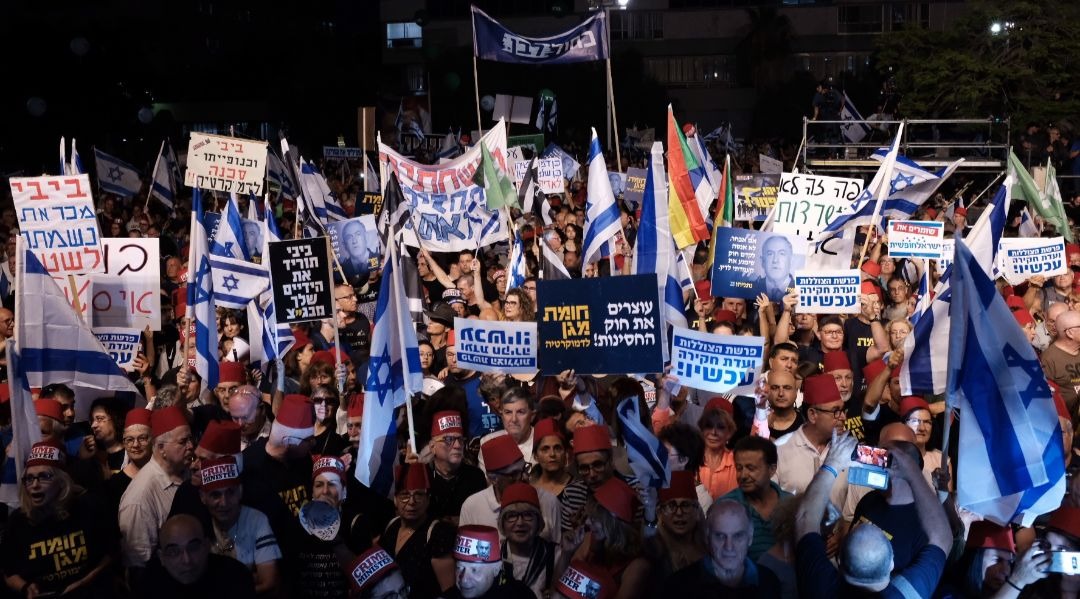 Tens of thousands of Israelis demonstrate in an oppposition rally dubbed "Defensive Shield For Democracy" in Tel Aviv in protest of proposed legislation aimed at giving immunity from prosecution for members of the Knesset, including Prime Minister Benjamin Netanyahu. (Tomer Neuberg/Flash90)
Advertisement

JERUSALEM (JTA) — Tens of thousands of Israelis gathered at a mass demonstration in Tel Aviv to protest proposed legislation aimed at giving immunity from prosecution for members of the Knesset, including Prime Minister Benjamin Netanyahu.

The rally, dubbed “Defensive Shield for Democracy,” held outside of the Tel Aviv Museum, was led by the opposition Blue and White Party of Benny Gantz. It also was organized by the left-wing Labor and Meretz parties. The rally also protested Likud party plans to submit a law to bypass the Supreme Court.

“Israel is the fulfillment of a dream but I’m here to say loud and clear what we all feel, that the dream is falling apart. There are those who are attempting to replace the people’s rule with the rule of a single man and to enslave an entire nation to the interests of one man,” Gantz said. He said he and his party would prevent Israel from becoming “the private estate of a royal family or sultanate.”

Protesters wore Turkish fez-style hats and compared Netanyahu’s running of the country to Turkish President Recep Tayyip Erdogan, which many at the rally called a “dictator.”

At the last minute, Gantz invited Arab Israeli lawmaker Ayman Odeh, the chairman of the Hadash party, to speak, under pressure from some in the opposition.

The so-called immunity bill would require the state prosecutor to ask the Knesset to lift the immunity of a lawmaker or minister who is the subject of an indictment, as was the case prior to 2005. During the election campaign Netanyahu said he had no plans to introduce an immunity bill, which could prevent him from being indicted in the three corruption cases against him.