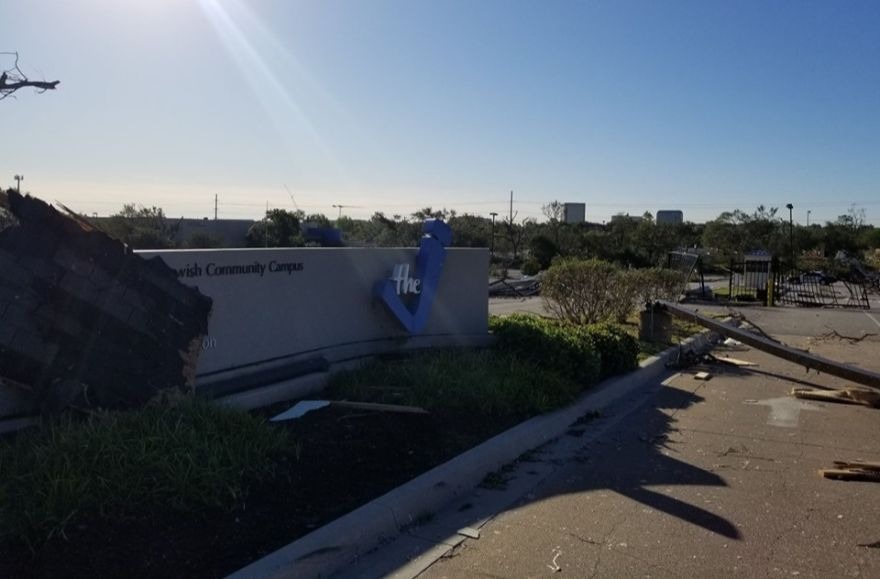 Damage on the campus of the Dallas JCC in the wake of tornadoes that hit North Texas, Oct. 20, 2019. (JCC Dallas Facebook)
Advertisement

(JTA) — Nine tornadoes caused considerable damage in North Texas, including at the Jewish federation and JCC buildings in Dallas.

No one was killed or badly injured in Sunday’s storms, the Dallas Morning News reported.

The tornadoes also damaged homes in Dallas-area Jewish neighborhoods, according to the Texas Jewish Post.

The Dallas Jewish Community Center said on Facebook that its neighborhood “took a hard hit” and was without power and landlines as of Tuesday evening.

The post said the JCC has launched cleanup and repairs at its campus, and is working with city and safety officials “to determine when it is safe to welcome guests back to the center.” It pledged to “be ready to assist those in need when we reopen.”

The Jewish Federation of Greater Dallas building sustained “substantial damage,” the organization said on Facebook. The federation said it hoped to be functioning offsite by sometime Wednesday.

“Our thoughts and prayers go out to all those whose homes and neighborhoods were impacted,” the post said. “We will rebuild together. We will heal together.”

The Dallas Fire-Rescue Department has counted 104 buildings destroyed, 286 with major damage and 344 with minor damage, according to reports. Texas Gov. Greg Abbott declared a state of disaster across 15 counties in North Texas, including Dallas.