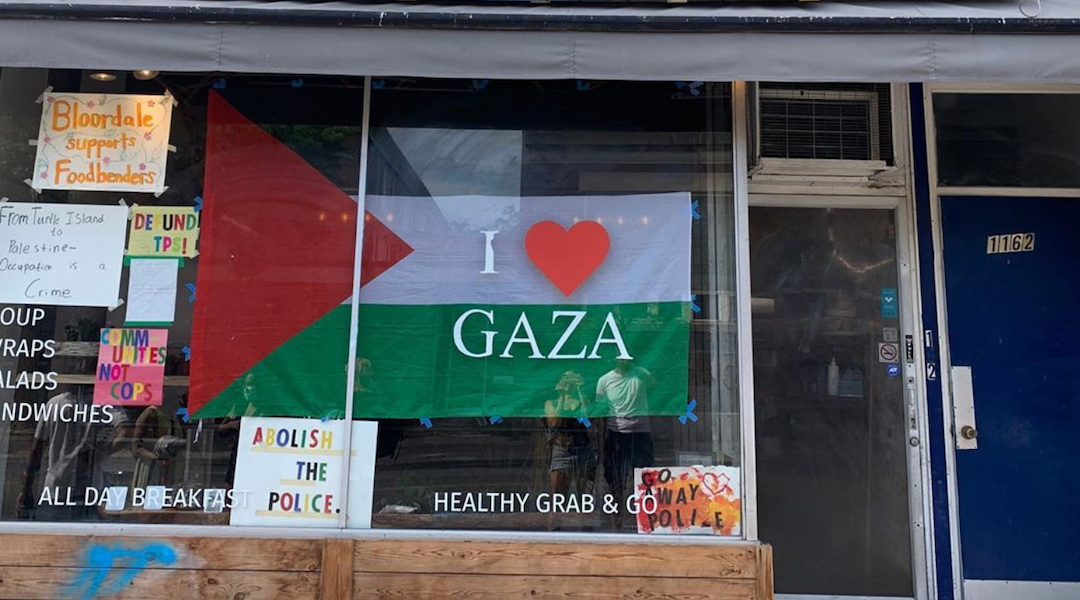 Foodbenders’ owner Kimberly Hawkins in recent days has doubled down on her support for the Palestinian cause evident in her social media feeds by decorating her store window. (Foodbenders/Instagram)
Advertisement

(JTA) — A Toronto health food restaurant has come under fire for using the hashtag “#zionistsnotwelcome” in social media posts.

“Open now – 8pm for non-racist shoppers,” one Instagram post read, with the Zionist hashtag and others, including “#freepalestine.”

“The first thing I will say is that I love Jewish people and they are welcome in my store. I have never said anything about Jewish people,” she wrote.

“I do not believe criticism of the Zionist political ideology, Israel or the Greater Israel Project, or pointing out its racist supremacist foundations amounts to criticism of the Jewish people or even Israeli citizens. Some people do believe this and may interpret these criticisms as anti-Semitic, and others will deliberately conflate the two to label you as racist with the primary goal of silencing discussion on Israel.”

“By stating that Zionists are not welcome to its store, this business is basically stating that Jewish people are not welcome,” Rabbi Meyer May, the center’s executive director, said in a statement. “This is clear anti-Semitism, extremely discriminatory and unacceptable.”

Hawkins countered in an interview with BlogTO.

“When I’m making a statement about Zionism, I am not referring to Jewish people,” she said. “It’s about the state government.”

The move apparently has cost business for Hawkins: This week, Uber Canada, Ritual and DoorDash terminated their delivery agreements with the restaurant and caterer. The Ambrosia Natural Foods chain announced that it would no longer carry Foodbender products in its locations.

Meanwhile, on Tuesday, Hawkins posted on Instagram an arson and death threat sent through the company’s website.

Hawkins has doubled down on her support for Palestinian causes. In recent days, she adorned her store window with a large Palestinian flag in addition to the “I (heart) Palestine” sign that was already hung there, and covered her store’s sign with a banner reading “Free Palestine.”

Foodbenders social media posts have said “police brutality is an Israeli export” and “Zionists are Nazis,” and included hashtags such as #fromtherivertothesea and #intifada. “From the river to the sea” is a popular political slogan used by Palestinians who reject compromise with Israel. The Palestinian intifadas, which took place in the late 1980s through the early 90s and again in the early 2000s, were a series of violent Palestinian protests that involved terror attacks on Israel.

On Saturday, some 200 pro-Palestinian demonstrators held a Day of Rage event in front of the store to protest Israel’s stated plan to annex parts of the West Bank. The protesters accused “Zionists” of brutality and genocide and called for companies to divest from Israel, the Toronto Sun reported.

According to the report, members of the Black Lives Matter movement told the crowd that they were engaged in the same fight and they should work together against white supremacists and to abolish the police.