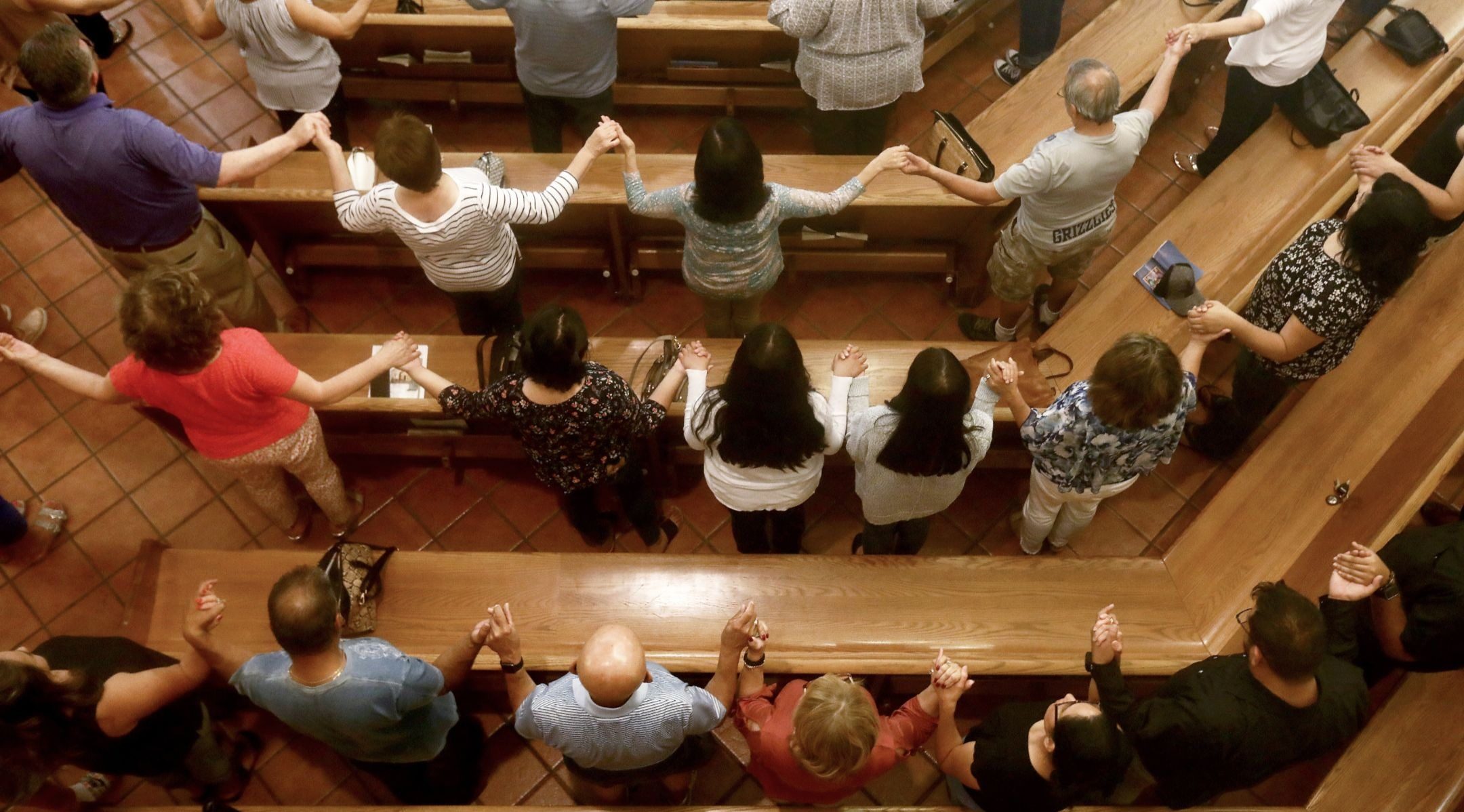 People hold hands in St Pius X Church at a vigil for victims after a mass shooting which left at least 20 people dead on Aug. 3, 2019 in El Paso, Texas. (Mario Tama/Getty Images)
Advertisement

(JTA) — Mainstream Jewish groups called for gun safety laws in the wake of two mass shootings that left at least 29 people and one shooter dead in the space of 13 hours.

Twenty people were killed and at least two dozen injured in a shooting on Saturday afternoon at a Walmart shopping center in El Paso Texas.  In Dayton, Ohio, 9 people and the shooter were killed and 26 injured in a mass shooting attack shortly after 1 a.m. Sunday morning.  The shooting took place on the outskirts of downtown Dayton’s Oregon District, a popular entertainment area.

“Our hearts and our profound condolences go out to the families of those who have lost their lives and we pray for a quick recovery of those injured. We are alarmed by the increasing gun violence in the US and around the world. We commend our local, state and federal law enforcement for their reported quick and decisive response,” the statement also said.

Jewish Community Relations Council of the Jewish Federation of Greater Dayton in a statement called the news of the shooting in the city’s downtown “heartbreaking.” The statement also said: “As the investigation continues, we will keep you informed regarding what we as a community can do to help the families, friends, and loved ones of those killed and injured, and to help the city heal. Our hearts go out to everyone who has been affected by this morning’s events.”

The alleged El Paso shooter is in police custody and has been identified as Patrick Crusius. He reportedly posted a manifesto on 8Chan, a conspiracy theory message board, in which he wrote disparagingly about Hispanic immigration to the United States and in support of the manifesto and actions of Chirstchurch mosque shooter Brenton Tarrant. Law enforcement officials reportedly were working to confirm that the manifesto was written by Crusius.

Later on Sunday, Crusius was charged with capital murder, El Paso County District Attorney Jaime Esparza said. Under Texas law, he could face the death penalty. The shooting is being investigated as domestic terrorism and a hate crime, CNN reported.

If the manifesto is proved to have been authored by Crusius, the Anti-Defamation League said in a statement, “this latest act of domestic terrorism will be, according to the ADL’s Center on Extremism’s records, the third deadliest act of violence by a domestic extremist in over 50 years and the second deadliest act of violence by a right-wing extremist in the same span, second only to the 1995 Oklahoma City bombing.”

The Dayton shooter, who was killed by police less than a minute after the start of the shooting, was identified late on Sunday morning by law enforcement as Connor Betts, 24, of Bellbrook, Ohio. He used a .223-caliber high-capacity magazine rifle in the attack. In addition, he was wearing body armor  and mask covering his face, and had extra magazines for the rifle. One of the victims of his shooting attack included his sister, Megan Betts, 22, who had arrived at the entertainment area in a car with her brother and a friend.

Rabbi Rick Jacobs, president of the Union for Reform Judaism, was in El Paso last week with hundreds of faith leaders to protest the treatment of asylum seekers on the border with Mexico. “Now our hearts turn again to El Paso, in the face of this slaughter of innocents by a gunman who authorities say was inspired by anti-immigrant rhetoric,” he said in a statement. “It is not enough for elected officials to muster their ‘thoughts and prayers.’ Like millions of Americans I’m sick of the pathetic excuses offered by too many lawmakers for not passing strong and effective common sense gun laws.”

Jacobs concluded: “And if we are to call on the leaders of our nation to address this epidemic of hate, a goal that, hopefully, almost all Americans cherish, we must ask: When will this president stop demonizing asylum seekers and immigrants, which serves to embolden those like today’s shooter?”

In a separate tweet, AJC CEO David Harris wrote: “As a nation, we need far more than “heartfelt thoughts & prayers” after #ElPasoTerrorAttack. The US faces an epidemic of mass shootings. We need concrete action, not a template reply. This is a nat’l emergency. It can’t go on like this. Oh no, it just has. #Dayton”

The Rabbinical Assembly, the international association for Conservative/Masorti rabbis, also called for new gun laws in a statement issued on Sunday. “We pray for their families, and for refuah sheleimah, full and complete healing, for the many who are wounded. We must not wait another moment to take action to improve U.S. gun laws,” the statement said.

“The El Paso killer was a white supremacist who wrote a ‘send them back’ manifesto, echoing the words of President Trump. He referenced an alleged Hispanic ‘invasion’ of Texas and called on migrants to return to their home countries. Trump is responsible for fueling a fire of xenophobia and hatred in our country, and Republicans are responsible for allowing it to occur,” Halie Soifer, executive director of the Jewish Democratic Council of America, said in a statement. “Trump and Republicans are both responsible for failing to protect our communities from the scourge of gun violence. Republican inaction in the face of these growing threats is reprehensible and deplorable, and we condemn it in the strongest possible terms.”

Responding to reports that the Dayton shooter identified as a “leftist” and railed against immigration offcials, Matt Brooks, executive director of the Republican Jewish Coalition, tweeted, “AS I HAVE SAID….. WE HAVE A HATE CRISIS ON THE FAR RIGHT AND FAR LEFT! WAKE UP TO THE THREAT. IT ISN’T ONLY WHITE NATIONALISTS!”

Israeli Prime Minister Benjamin Netanyahu tweeted his condolences. “In the past 24 hours, we have witnessed two murderous attacks in Texas and Ohio. On behalf of all government ministers and all citizens of Israel, I send condolences to the bereaved families, best wishes for recovery to the injured, and solidarity with the American people,” he said in the tweet.