JERUSALEM (JTA) — Israel said it successfully tested the Arrow-3 advanced missile defense system against long-range missiles. The Arrow-3 Interceptor “was launched and completed its mission,” Israel’s Ministry of Defense said in a statement issued on Monday. The test, which simulated a fully operational scenario, was conducted early Monday at a test site in central Israel […] 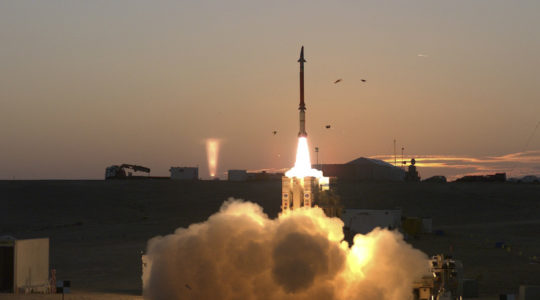 The David’s Sling missile defense system, a joint project of Israel and the United States, is designed to stop medium-range rockets, drones and cruise missiles.

The rockets were designed to enable interception of ballistic missiles beyond the earth’s atmosphere, both to provide a solution to missiles carrying nuclear warheads and to increase the odds of intercepting enemy missiles.

Iron Dome battery moved to Haifa amid unrest in Syria