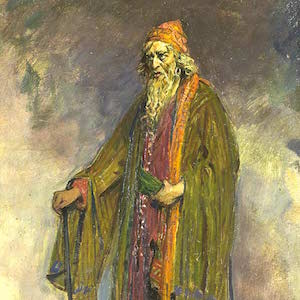 The original Shylock was not a Jew but an Englishman, and Shakespeare borrowed his character from an anti-Jewish poem written in the thirteenth century, was the claim made yesterday by Myer J. Landa. Jewish journalist and dramatist, author of “The Alien Problem” and “The Jew in Drama.”

Speaking before the Jewish Historical Society, Mr. Landa said he had traced the origin of the Jewish creditor who demanded his pound of flesh to a neglected English religious poem, “Cursor Mundi”, by an anonymous author, written about the end of the thirteenth century. Before then, said Mr. Landa, there was no Jew in the story.

The creditor in “Cursor Mundi”, written about the time the Jews were expelled from England in 1290, was a fiendish person who sought to take the weight of the money he lent in a debtor’s flesh piecemeal, beginning with the eyes and proceeding to the hand, tongue and nose. This horrible mutilation, Mr. Landa declared, was absolutely unknown in Jewish law, tradition, legend or history. The author, he said, got the idea from English law and practice in Norman and Plantagenet and even Saxon times.