10 Years in Europe Have Been Stormy 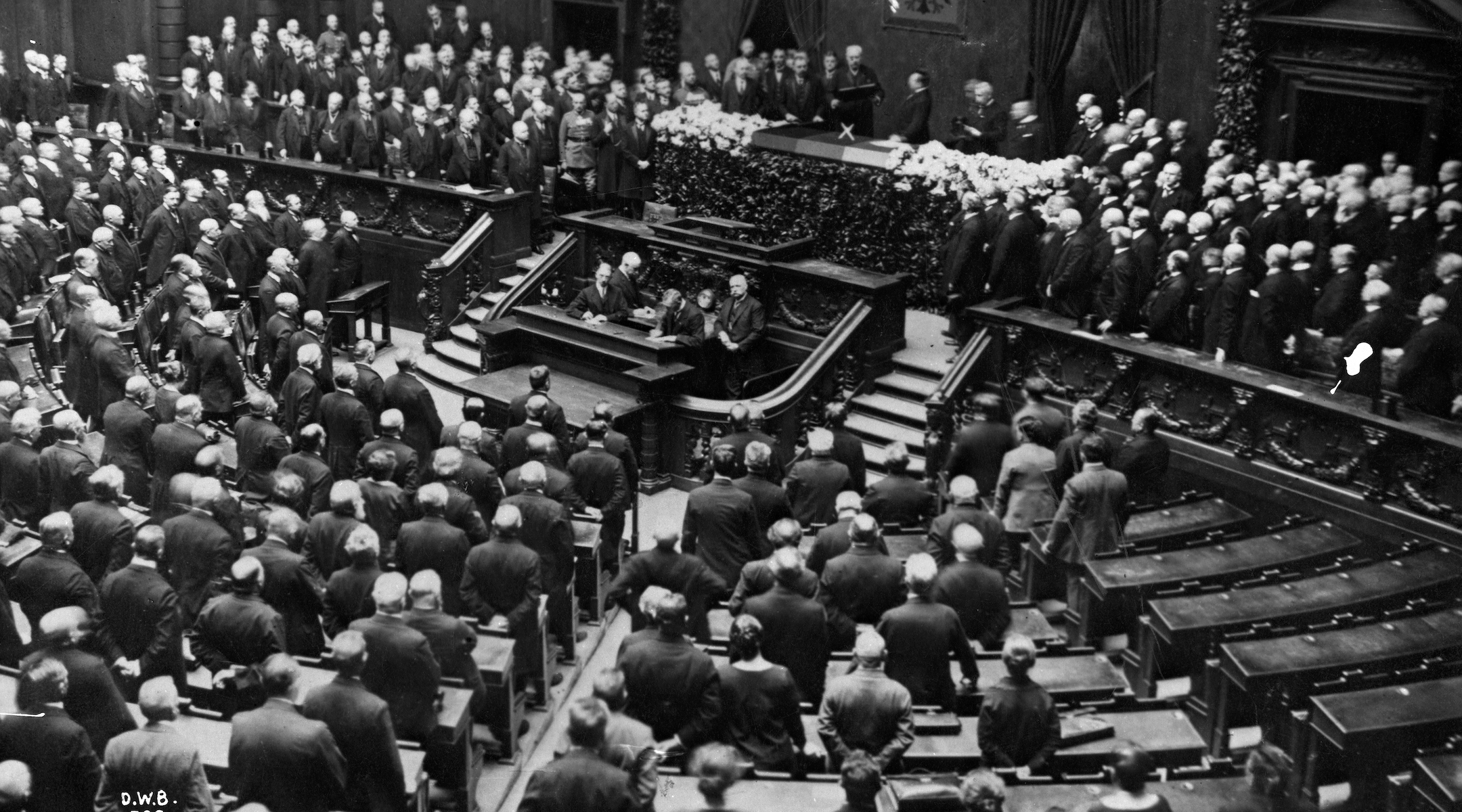 Paul von Hindenburg takes the oath to take office in the Reichstag in Berlin in 1925. He would appoint Hitler as chancellor of Germany in 1933. (ullstein bild via Getty Images)
See Original Daily Bulletin From This Date
Advertisement

Time is history. The past ten years of Jewish life in Europe are ten years of stormy history, a decade of fluctuating and contrasting developments.

A decade ago Austria was, for the Jews, the most liberal of the Central European countries. Hungary was the most anti-Semitic. Today Austria is quite as anti-Semitic as Hitler’s Germany, while in Hungary, anti-Jewish speeches and articles are punishable by arrest.

Rumania, ten years ago, was much more anti-Semitic than Poland. And today? Today Rumania forbids the printing of articles inciting to anti-Semitism even in the Cuzist press. But in Poland the Endek prints daily malicious and venomous statements about the Jews and the government is apparently unconscious of it all. In Rumania, the Nazi press has been forbidden, while in Poland the Yiddish newspapers are confiscated for having “insulted” Hitler by the use of a single expression.

Times change, and with them, traditions. Ten years ago Lithuania was a country most friendly towards the Jews. Now we have in Lithuania anti-Jewish excesses such as those which occurred at Siauliai. In Latvia ten years ago, the Jews rejoiced in complete cultural autonomy. At present no more than one Yiddish newspaper may appear in Latvia, and all traces of Jewish autonomy have long since disappeared.

The Jews in the various countries of Europe have experienced sharp contrasts in the past ten years, broad fluctuations and great opposition.

The Jews of Germany, of course, experienced the greatest change.

Germany in 1924. The doors to all universities, to all government offices, to all branches of the economic life of the land are open to Jews. Jews as high officials, Jews as the best lawyers, Jews as the most prominent professors. Jews as the leading personalities in the whole of the financial setup of the country. Jews as the bearers of culture. Jews as the best artists. The Jewish youth free, carefree, assured of a future. Jewish institutions supported by special Jewish taxes which the government helped collect. All of Jewish life firm, solid, secure.

Germany in 1934. The “Aryan paragraph.” Hitlerite legislation. The ruin of thousands of Jewish doctors, lawyers and professors. The rush to emigrate. Fear of the morrow. The ousting of Jews from all public positions. The insecurity of Jewish institutions. Bigoted anti-Jewish agitation in public. The sense of dejection. Great isolation from the rest of the world. The restratification from the professions to ordinary trades. The fear of uttering one unnecessary word. The dread of one’s Nazi neighbor.

In Germany in 1924 there were no Jews dependent upon charity. German Jewry was the wealthiest in Europe. It was a Jewry generous of hand for the needy, a Jewry which made it possible for tens of thousands of Jews to come in from Poland, Galicia, Austria and Rumania and settle in Germany, become acclimated and feel themselves the equals of the Germans.

Now, in 1934, tens of thousands of German Jews who lack a place in which to spend the night are stranded in Paris. Hundreds of German Jews stand about in Amsterdam, waiting for the local relief committee to give them a free meal. Hundreds of Jews lie about in Antwerp, in trepidation lest tomorrow the relief committee of Antwerp may have to shut down.

Ten years ago, German Jewry was still the creator of Jewish science. All of “Judaica,” all the extensive research into Jewish culture treasures and Jewish philosophy, was born in Germany.

Today, Germany is, in this respect that of the creation of Jewish learning nothing but a void. Old Jewish libraries are being moved from Germany. Individuals with a fund of Jewish learning seek places for themselves anywhere but in Germany.

And the same is true of Jewish writers in Germany, of German Jewish artists, of all the famous Jewish authors of Germany who are now compelled to wander in the Diaspora. The Stefan Zweig of today is not the Stefan Zweig of ten years ago. The Lion Feucht-wanger of 1934 is not the Feucht-wanger of 1924. They create, but on foreign soil. All of them now are emigrants, people deprived of their natural environment. They are artists without an audience, actors without a stage, without atmosphere, without natural inspiration.

Now little Catholic Austria is following in the footsteps of Germany.

The Austria of ten years ago was proud of its cosmopolitan grace and elegance. The Austria of today desires only to become purely-Catholic, purely-Christian.

Little Austria cannot permit herself to come out openly with her anti-Semitism, as did Hitler’s Germany, so she goes about it somewhat more quietly and more covertly. Instead of an “Aryan” paragraph other excuses are found for removing Jewish doctors and lawyers from their positions. Instead of openly shutting the schools to Jewish students as Hitler did, special schools are instituted for Jewish children; which necessarily means that they will no longer be permitted to enter the public schools.

Ten years ago in 1924 things were otherwise in Austria. Then Austria was Socialist. In Austria, as in the Baltic states, there was a Jewish national council. There was talk in Vienna of giving the Jews national autonomy. Austrian Jewish leaders felt at home in government circles. The Jewish community was part of the state. The government collected the taxes for the Jewish community and punished those who did not pay just as though they had not paid one or other of the government taxes.

But as time went on, Austria began to change its natural attitude towards its Jewish citizens. At the University of Vienna anti-Jewish disorders began to crop up. Jewish professors were insulted by anti-Semitic students. Newspapers began to print anti-Jewish articles. The nation shifted toward the right and began to be anti-Jewish. The country started on the downward path economically, and the Jews were soon blamed for it.

Austrian anti-Semitism took shape under the Dollfuss regime and acquired a clear outline, a Catholic outline. The members of Dollfuss’ Catholic cabinet no longer made any secret of the fact that they were anxious to deprive the Jews of all rights. The present Chancellor of Austria, Dr. Schuschnigg, who was minister of education under Dollfuss, declared clearly and openly that the Austrian constitution must be altered and that Austria must become Catholic.

Now, in the year 1934, even the most confirmed optimists no longer feel that there can be any hope for improvement of the Jewish situation in Austria. The Austrian constitution is now being “corrected” and will soon go into force. And when it goes into effect it will, once and for all, end all Jewish rights, irrespective of the fact that these rights are guaranteed by the international treaty of St. Germain.

For in these days international minority agreements are only “scraps of paper.”

Bordering on Austria and Germany are Hungary and Czechoslovakia, two lands about which the Jews at present have no reason to complain.

The Jews of Czechoslovakia are perhaps the only ones in Central Europe who have not once had a taste of anti-Semitism in the last ten years. The anti-Semitic tendencies noticeable in certain circles of the German population of Czechoslovakia can never take form so long as Prof. Masaryk remains president of the country. Even the powerful anti-Semitic propaganda of the Nazis within the past few years, could never spread very far in Czechoslovakia, because the government sternly suppressed every manifestation of it.

In Hungary the situation is vastly different. With respect to the Jews, Hungary has gone through a unique upheaval.

Ten years ago, Hungary was the only avowedly anti-Semitic country in Europe. It was the only land which openly proclaimed a “numerus clausus” for Jewish students. Hungarian ministers at that time were the only ones permitting themselves to make openly anti-Semitic speeches at League of Nations meetings. In the Hungarian parliament, bitter venom was poured upon the Jews.

Gradually however, the Hungarian government began to realize that it was committing a great injustice against its Jewish citizens. Gradually it became convinced that the Jews of Hungary were good and faithful patriots. Little by little it came to the conclusion that anti-Semitism was no asset to a land, but a source of great harm.

And a wonder came to pass in Hungary. At the time that Europe in general began to go anti-Semitic, and Germany and Austria to develop anti-Semitic propaganda, Hungary began to disavow its anti-Semitism. The Hungarian premier, General Goemboes, suddenly and to everyone’s surprise openly declared that he regretted his past anti-Semitism. He had the courage and the honesty to announce his repentance from the tribune of the Hungarian Parliament and to declare that he would no longer permit anti-Semitism in Hungary.

Goemboes made that promise, and is keeping it to this very day. Today, anti-Semitism in Hungary is an offense for which one stands trial in court. For an anti-Semitic speech in Hungary, one is sentenced to several months in prison. The same holds for anti-Jewish articles in the press.

In the history of the Jews of Europe during the past ten years, Hungary is the only country which had the courage not only to tur# are now under arrest in Riga, and Jewish cultural organizations are prohibited.

In both these little countries anti-Semitism is rampant and is aided by Nazi propaganda from Germany. Every trace of the original constitutions promising the Jews equal rights has long since been wiped away. No notice is paid them any longer.

Time makes history. The history the past ten years have made for the Jews of the various European countries is far from happy. With very slight exceptions, it is a sad chronology. An observer of the Jewish position ten years ago certainly would not have thought that in 1934 the Jewish position would be such as it is today. He would have expected something else hardly the picture 1934 presents.