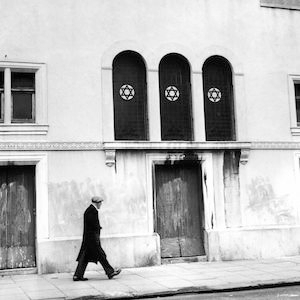 Members of the Finchley Synagogue here, fearing a renewal of attacks on synagogues, particularly by followers of the pro-fascist British League of Ex-Servicemen, are maintaining all-night watches at the temple. Officials of the Golders Green Synagogue reported that as a precautionary measure, they remove all valuable documents from the building every night.

Laborite D.N. Pritt, addressing a meeting in Manchester sponsored by the Manchester Union of Jewish Ex-Servicemen to demand legislation against the spread of racism and the banning of fascist organizations, declared that the Home Secretary’s attitude that fascism and anti-Semitism could be ignored as negligible was “dangerous and indefensible.”

John Sweatman, a newspaper vendor who was fined $40 for taking part in anti-Semitic riots in Eccles, Lancashire, said today that he did odd jobs for Jewish businessmen who had promised to pay his fine.

The Moscow radio today charged that fascists were responsible for last week’s have of anti-Semitic attacks throughout Britain. The Russian commentator declared that the fact that the attacks took place in many different cities at the same time indicated that they “were planned in advance and directed from a single center.”

Chiding the Labor Government for not suppressing all fascist activities two years after the end of the war, he said “it is hard to conceive all this happening today in Britain whose people were among the most active fighters in the war of liberation against Hitler fascism.”