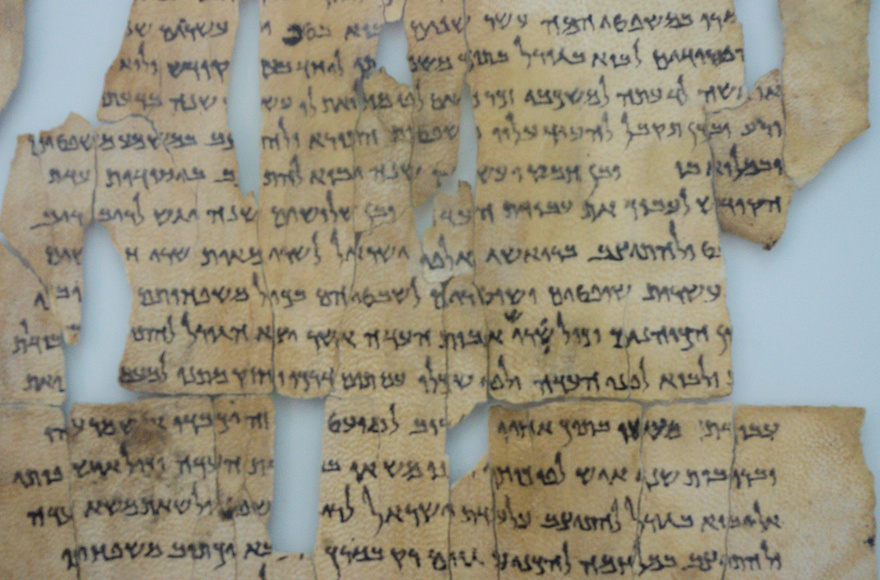 The so-called "Dead Sea Scrolls" are a set of ancient Jewish/Biblical documents discovered on the northwest shore of the Dead Sea between 1946 and 1956. Most are in Israel today, but this (and others) are in Jordan since borders have shifted over the years. Written in Hebrew, Aramaic and Greek, mostly on parchment, but with some written on papyrus and even copper, these manuscripts generally date between 150 BC and 70 AD. Many scholars believe therw were buried just before the Romans put down the "Jewish rebellion" that ran from about 67 to 73 AD. The scrolls are traditionally identified with the ancient Jewish sect called the Essenes, but scholars debate that. In fact, many of the scrolls were declared "state secrets" when they were found. It is sort of strange to think that something written over 2,000 years ago could still represent a national security risk today.
See Original Daily Bulletin From This Date
Advertisement

A Dead Sea scroll containing the 81st to the 85th Psalms has been found at the Massada fortress near the Dead Sea where a team of Hebrew University archaeologists are currently excavating the palace of King Herod, it was announced here today by Dr. Yigael Yadin, Israel’s former Chief of Staff, and director of the expedition.

The first Biblical scroll dating from the period of the Second Temple (516 B.C.E. to 70 C. E.), it was found with a second non-Biblical scroll, inside the northwestern wall of the fortress. Professor Yadin said that the script of the scroll is identical with that of the Dead Sea scrolls and will therefore be of great value for their study.

Also found in the fortress during the latest phase of the excavation was a board of 17 silver shekels from the time of the first Jewish revolt around 70 C.E. The coins were inscribed with the words, “Shekel of Israel” and “Jerusalem the Holy.” In other parts of the fortress were vessels, baskets and weapons, several scores of spherical stones used as catapult projectiles and fragments of shields.