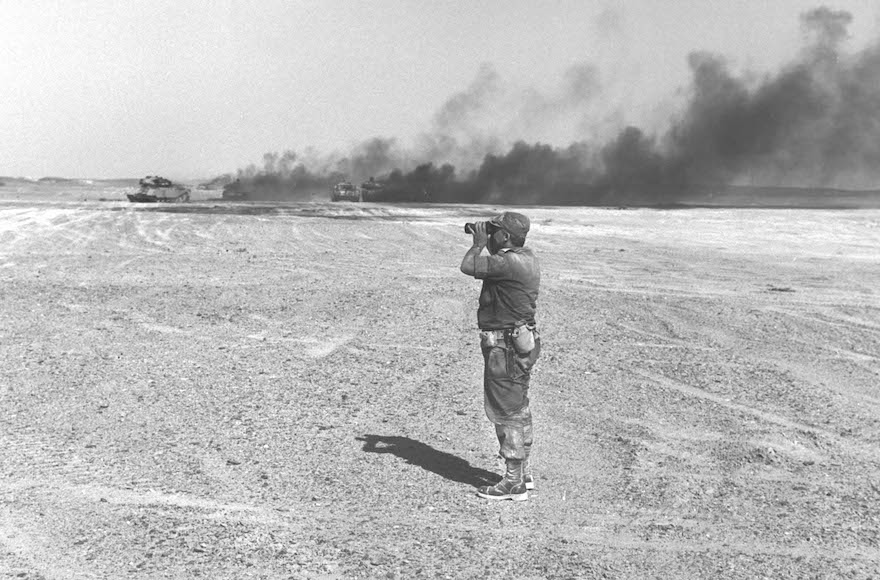 Israel’s armed forces began today the consolidation of their initial victories against Egypt and Jordan as armored spearheads pushed across the Sinai Peninsula on a 30-mile front some 90 miles from the Suez Canal in the second day of the third Arab-Israeli war.

The Israel Air Force, having established virtually absolute air domination by crippling the air forces of Egypt, Syria, Jordan and Iraq, was diverted into ground support operations. In less than two days of brilliant action, Israel had given Egyptian President Nasser’s field forces, as well as his air force, a severe beating and left Jordan’s crack Arab Legion almost impotent as a fighting force.

The Israeli Defense Command announced this evening that Israeli armor fighting in the Sinai Peninsula had destroyed 200 Egyptian tanks. Israeli losses were not mentioned.

Reports began to come in of casualties. More than 500 persons were reported injured in Israel’s capital, mostly persons who ignored sirens and stayed out on the streets. A number of persons were injured in Natanya and one person was reported killed when Iraqi bombers attacked the coastal city.

OLD CITY OF JERUSALEM IS LIBERATED

Jerusalem, a city torn in two for 13 years was about to be reunited. Israeli forces surrounded the Jordan-held Old City of Jerusalem today and reportedly occupied most of the area. The Old City, the second capital of Jordan, is the site of some of the holiest places in the Jewish and Christian religions. Jordanian denial of the right of access for Jews to such holy places as the Wailing Wall has been a bone of contention ever since Israel was established.

In less than 24 hours, Israel destroyed Nasser’s potential to carry out his proclaimed threat to uproot and eradicate the state of Israel, captured strategic positions dominating the entire Sinai Peninsula and held its forces poised to cut off the Suez Canal and recapture the strong point at Sharm-el-Sheikh dominating the Strait of Tiran and controlling Israel’s gateway to the East.

Israel’s control of Khan Yunis, El Arish and Deir El Balah effectively severed Egypt’s access to the Sinai Peninsula and ended any threat of Egyptian land invasion of Israel territory. Israeli forces took the city of Gaza and possession of the entire Gaza Strip, long pointed like a dagger at Tel Aviv.

The Israelis announced two important land victories on the Jordanian front. Israeli forces captured Latrun, midway between Ramle and Jerusalem — a key communications center and a threat to the Jerusalem-Lydda route, and seized the Arab stronghold of Jenin, northernmost point of the “Bloody Triangle.” Capture of Jenin bars Jordanian forces from a land attack on the Haifa coastal area. One of the bitterest battles of the 1948 War of Liberation was fought for control of Latrun which was still in Arab hands when a cease-fire ended hostilities.

Ramat Hakovesh settlement, near Kfar Saba on the Jordanian border, came under heavy shelling this afternoon from Jordanian artillery. Ramat Hakovesh is one of the largest collective settlements in the area and has a long record of attacks by Arabs on its members and on the village itself since 1956. No casualties were reported.

General Mordehai Hod, air force commander, announced shortly after midnight that the Israel Air Force had destroyed 374 enemy planes and that 34 had probably been destroyed. This is considered to be about one-fourth of the total air force power the Arabs mustered at the beginning of hostilities.

Gen. Hod reported that Egypt had lost 286 planes, 20 of them in combat. Among the planes destroyed on the ground, he said, were 30 TU-16 heavy bombers and 12Sochoy fighter-bombers which Egypt had only recently received from the Soviet Union.

He said that Syria had lost 52 planes, including two Illyushin bombers, and Jordan had lost 20 British-built Hunters and seven transport planes and helicopters. Gen. Hod revealed that the Israeli air forces had carried their strike into Iraq and had attacked the Iraq base at Kiraki, near the Jordanian border, destroying nine planes there.

In all of Monday’s far flung aerial activities, Gen. Hod said, Israel lost only 19 planes — four French-built Ouragans, four Mysteres, four Super-Mysteres, one Vautour and four Fouga-Magisters. Eight Israeli pilots were known to have been killed. Of the 11 missing, nine were believed to be in enemy hands.

In aerial mop-up operations, the Israel Air Force reported that another 14 warplanes of Egypt and Syria were shot down today. They included four Sochoy fighter-bombers, one of the newest Soviet types supplied only recently to Egypt. Israeli planes shot down another two Soviet made MIG-21 jets in the Sinai fighting. An Iraqi bomber was downed by anti-aircraft fire near Afulleh. It was believed to have been one of the planes which took part in the bombing of Natanya.

Initially the Syrian attack on Israel when fighting broke out early Monday morning was by air. After Syrian planes suffered severe losses, the Syrians tried an armored infantry attack twice against Tel Dan, source of the Dan River. Israeli armor repulsed both attacks and also smashed a Syrian attack on Shear Yashuv. The Syrians then went back to shelling border settlements, inflicting damages and casualties. Army units silenced the Syrian shelling.

Gen. Itzhak Rabin, chief of staff of the Israel defense forces, reported on a broadcast this morning that Israel had taken large numbers of prisoners on the southern (Egyptian) front and had captured a considerable amount of arms and equipment, including tanks and artillery. He said the enemy had suffered heavy casualties. He termed Israeli losses comparatively light.

Israel struck its hardest blow in the air, Gen. Rabin said. He termed the air smash a “devastating blow” which had assured Israel of air supremacy.

Israeli forces smashed into Abu Ageila, a key junction in eastern Sinai from which roads lead to all parts of the Sinai Peninsula, and seized the strong point this afternoon. This was the third time Israeli forces had seized Abu Ageila, the first two occasions being in the Independence War in 1948 and the Sinai campaign in 1956. Control of Abu Ageila opened the way for sweeping advances west and south. Israeli spearheads also seized a number of towns near El Arish, which they captured late yesterday to consolidate their hold on the vital northern Sinai city.

Observers piecing; together the developments of the first 24 hours of the war stressed Israel’s strategic gains, Nasser’s power to attack was destroyed as was probably his ability to hold the Suez Canal and the Strait of Tiran. The Arab fist clutched around the Israeli throat at the Jerusalem corridor had been wrenched loose and the threat to communications between Jerusalem and the rest of Israel removed. Arab Legion machine-gunners were driven from the vantage points on the Old City wall from which they had threatened large areas of the New City of Jerusalem.

These gains, it was noted, were achieved with relatively minor losses and without the heavy cost to the civilian population which had been feared because of the proximity of Arab forces to Jewish population centers.