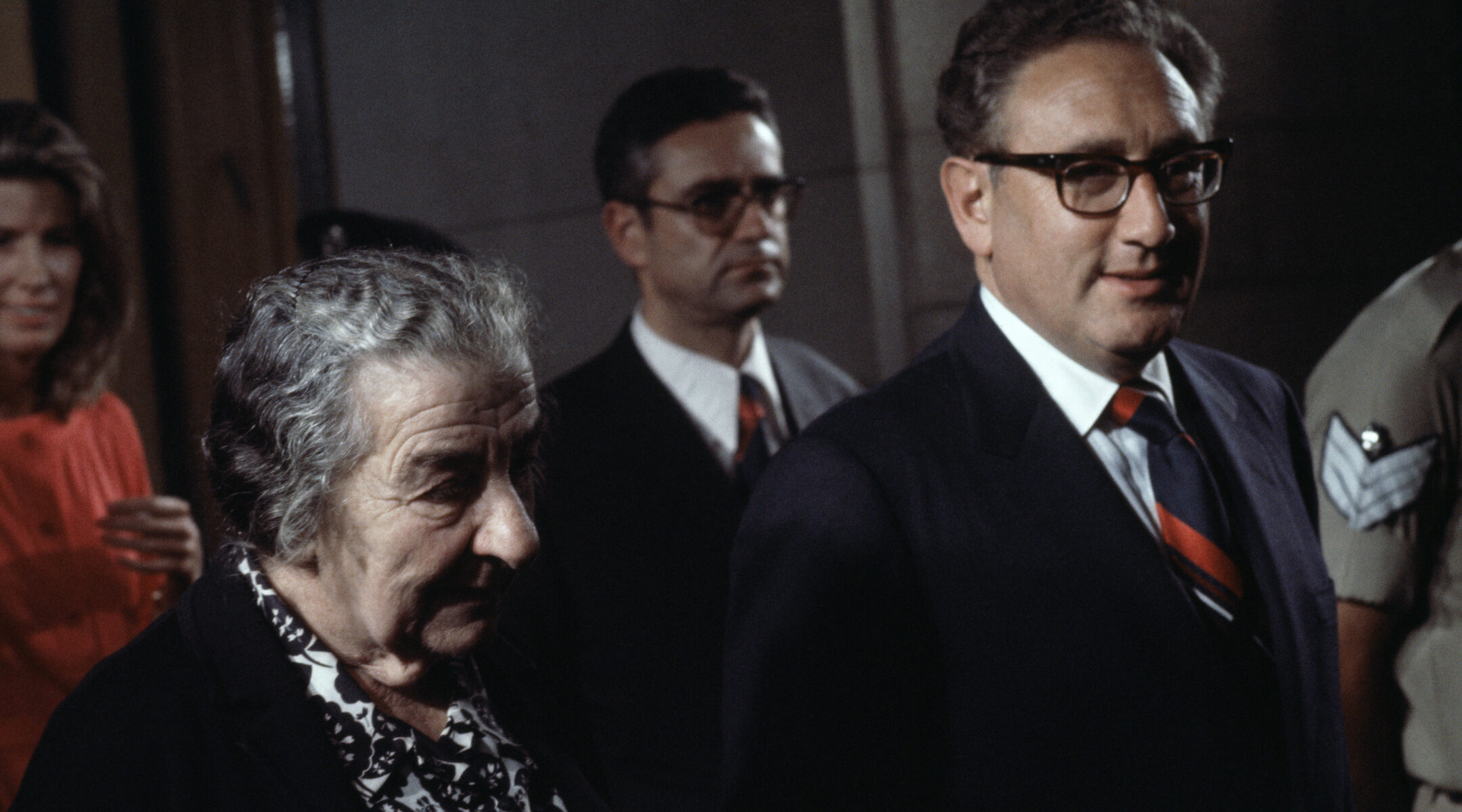 Secretary of State Henry A. Kissinger arrived in Israel this afternoon for an overnight stay and crucial conferences with Israeli leaders that could determine the fate of the Geneva conferences before it starts. The American diplomat landed at Lod Airport from an official U.S. jet that brought him directly from Beirut, Lebanon, the last leg of a whirlwind tour of European and Arab capitals on the eve of the conference that was to have opened Tuesday in Geneva. Kissinger met for more than three hours with Premier Golda Meir at her office in Jerusalem. Among those present were Defense Minister Moshe Dayan, Foreign Minister Abba Eban, Deputy Premier Yigal Allon, Ambassador Simcha Dinitz, and State Department officials Joseph J. Sisco and Alfred L. Atherton. Ambassador Kenneth Keating arrived at the office shortly after the talks began.

But the Dec. 18 opening date was shrouded in doubt even as Dr. Kissinger and his entourage toured the Middle East. Aides to Kissinger were saying in Amman, Jordan yesterday that the opening might be postponed to Friday, Dec. 21. United Nations Secretary General Kurt Waldheim who was to have flown to Geneva last night, postponed his departure and as of today none of the participants have received formal invitations to attend the Geneva talks. (See separate UN story.)

During the 15-minute flight between Lod and Jerusalem officials in Kissinger’s entourage seemed relaxed, according to Yehoshua Tadmor, a pool correspondent who joined Kissinger and his party. When he expressed Israeli concern over the fact that the peace talks in Geneva were under UN auspices and the possibility that the Palestinians would be represented at the talks, the officials, whose names the reporter did not mention, told him that Israel was exaggerating its fear of UN involvement in the conference. They also said they felt no Arab pressure to give the Palestinians representation in Geneva. Tadmor said that one of Kissinger’s closest aides told Kim that the Secretary was not given a list of Israeli POWs in Damascus although the matter was brought up by him in his talks with Syrian officials. Israelis are deeply concerned over last minute problems that have developed and have been waiting with a sense of urgency to see what solutions Kissinger may come up with.

The problems are many fold–the primary one being the role of the UN which Israeli officials believe will determine the nature of the conference. Another problem is Egypt’s last-minute demand that the disengagement of forces issue–meaning an Israeli pull-back from the west bank of the Suez Canal–be made the first agenda item and Cairo’s rejection of face-to-face contacts with the Israelis. A third serious problem is Syria’s refusal to budge on the prisoner of war issue. Dr. Kissinger, who has just visited Cairo and Damascus will, it is hoped here, bring acceptable solutions to these problems that will allow Israel to participate in the Geneva parley.

The skies were overcast and a cold wintry wind was blowing as Kissinger and his party of 50 aides landed at Lod. After being greeted by Keating. Eban and Dinitz, the Kissinger party boarded two giant Israel Air force helicopters for the short flight to Jerusalem. Kissinger ignored the army of journalists, tv cameramen, photographers and the battery of microphones set up at the airport He was also obviously unaware of some 200 demonstrators in a far section of the airport shouting “Kissinger go home” at the top of their voices.

The demonstrators identified themselves as groups opposed to Israeli withdrawal from the administered Arab territories. They carried posters in English, Hebrew and French reading, “Kissinger, are you preparing another Munich”; “Kissinger’s Peace in Vietnam Cost 50,000 Lives”; and “Kissinger, you were saved from the Nazi Holocaust, don’t put us through another Holocaust.” Seventeen members or supporters of the Jewish Defense League were arrested along with their leader. Rabbi Meir Kahane after they attempted, at Kahane’s exhortation, to break through police barriers.

In Jerusalem, where the Cabinet met Friday and most of Sunday to discuss the Geneva conference and Kissinger’s visit, the cold, rainy weather and grim, unprecedented security measures reflected Israel’s apprehensive mood. The King David Hotel, where Kissinger and his entourage will spend the night, bristled like an armed camp. Armed border police surrounded the hotel and lined the routes Kissinger’s motorcade took from the helipad near the Knesset to the hotel, from the hotel to Premier Meir’s office and from there to Foreign Minister Eban’s residence where the Secretary of State dined tonight. Guard rails were erected on the curbs all along the route, manned by rain-coated police holding back thousands of Jerusalem residents who lined the streets despite the foul weather.

(Israeli officials are most concerned over what appeared to them to be evidence of an eroding American position under pressure of the Arab bloc and oil hungry West European and non-aligned nations, to give the United Nations more than the originally intended symbolic role at the Geneva talks. Before leaving for his Mideast trip last week Kissinger reportedly met with several Jewish intellectuals in Washington and told them that Israel will have to give up a lot of territory and withdraw to its pre-June 1967 borders. He also told the intellectuals that pro-Israel sentiment in the U.S. is eroding and that Israel will not be able to expect unstinting U.S. support in the future unless it settles the question of borders, among other things, in the upcoming peace talks. Kissinger also reportedly told the Jewish intellectuals that Premier Golda Meir suffers from a “Jewish ghetto” mentality and denied that he had forgotten his own persecution by Hitler.)

Last week, Israelis seemed confident that the U.S. and the Soviet Union, co-sponsors of the Geneva conference, would stand firm on their position that they alone would preside at Geneva. But as the week wore on, it became clear that the U.S. was bowing to pressure aimed at securing a more decisive role for UN Secretary General Waldheim than that of “observer” or “participant” that Kissinger and Soviet Communist Party Secretary Leonid I. Brezhnev had originally intended for him.

Israel fears that a UN framework would obviate the need for the Afabs to engage in a real dialogue and give-and-take negotiations. The Israelis believe that with the General Assembly or the Security Council hovering in the wings the Arabs will remain intransigent, confident that the UN will come to their support should a dispute or deadlock develop.

If on the other hand, the conference is one where the parties can negotiate face-to-face with no outside interference, Israel is ready to concede the UN its formal trappings. The question here is what do Washington–and Moscow–really intend. Is this to be an Arab-Israeli peace conference in the true sense of that term? Most observers here still believe that the superpowers will stand firm. But they are anxious to have Kissinger corroborate that view during his talks in Jerusalem in the next 12 hours.