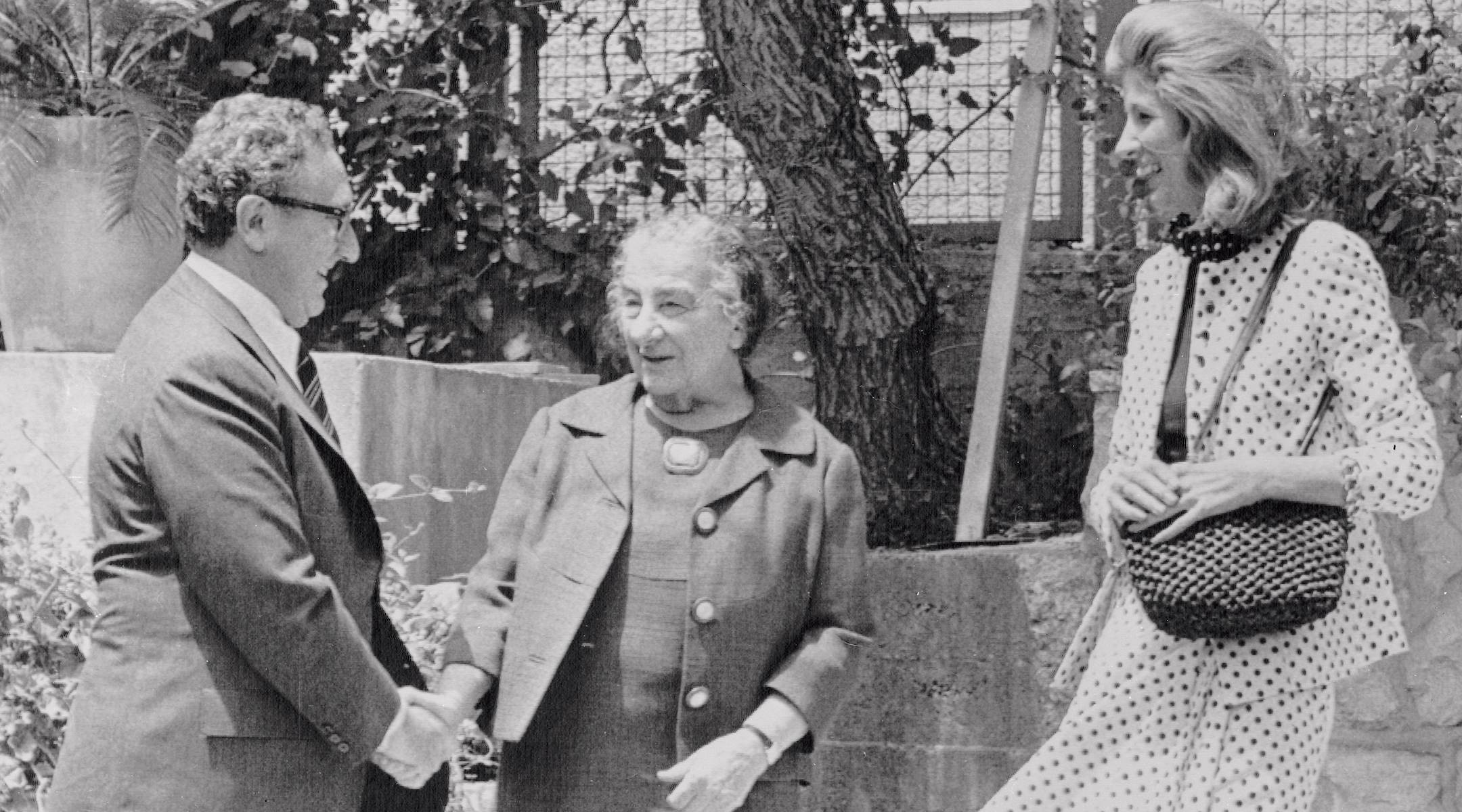 As her famous husband shuttled between Jerusalem, Damascus and Alexandria in tireless pursuit of Israeli-Syrian disengagement, Nancy Kissinger performed the tasks of a diplomat’s wife abroad–social rounds and sightseeing–which were in their own way no less grueling than those of the Secretary of State.

Reflecting the public’s almost insatiable appetite for news and views of Dr. Kissinger’s recent bride, reporters and photographers dogged her every step in and around Jerusalem and on a visit to Masada. They unintentionally created a commotion when, along with security men they followed Mrs. Kissinger into the Ezrat Nashim (women’s section) at the Western Wall where males are forbidden. “What’s happening here?” screamed the attendant in near panic. But it was too late, for Mrs. Kissinger was already at the Wall surrounded by photographers as she watched elderly women sobbing against the ancient stones

Her tour of Jewish holy places Friday was followed by a visit to the Dome of the Rock which according to Moslem tradition, can be trod only by unshod feet. Journalists, barred from entering the mosque, spent their time speculating which of the long row of shoes outside belonged to the distinguished guest. When Mrs. Kissinger emerged, she had the same question. “Where are my shoes?” she asked.

She eventually found them, and it was off to the Church of the Holy Sepulchre. Mrs. Kissinger is officially the guest of Suzi Eban, wife of the Foreign Minister. On Friday night, while her husband was in Damascus, she dined with the Ebans at one of Jerusalem’s most fashionable restaurants. Jerusalem society showed up too to catch a glimpse of the famous visitor.

On Saturday there was a walking tour of the Old City, followed by hordes of photographers and friendly crowds. Mrs. Kissinger, who is about six feet tall, found it difficult to keep a low profile, even wearing low-heeled shoes. She maintained her smile, but obviously she was weary and especially unhappy over the flash bulbs that kept popping off in her face.

Dr. Avraham Biran, head of the government’s antiquities department persisted in giving her a cram course on the history of Jerusalem as they walked through the narrow streets. Mrs. Kissinger listened politely, asked only one or two questions and gave the impression she wished the tour would end.

Her itinerary included visits to the Yad Vashem Holocaust memorial where she was shown the book of the destroyed Jewish communities of Bavaria in which the names of members of her husband’s family are listed. On Friday morning there was a visit to the excavations at Masada as guest of Hebrew University archaeologist Yigal Yadin who appeared only too anxious to impart to Mrs. Kissinger the entire history of the ancient fortress and details of the latest digs.

Mrs. Kissinger also visited the Weizmann Institute at Rehovot where its president, Meyer Weisgal was to give a party for Golda Meir on her 76th birthday. She spent most of Saturday afternoon resting in her King David Hotel suite and then hurried to Ben Gurion Airport to meet her husband arriving from Egypt. Yesterday the Kissingers left for Amman, Jordan, and returned today to Jerusalem.