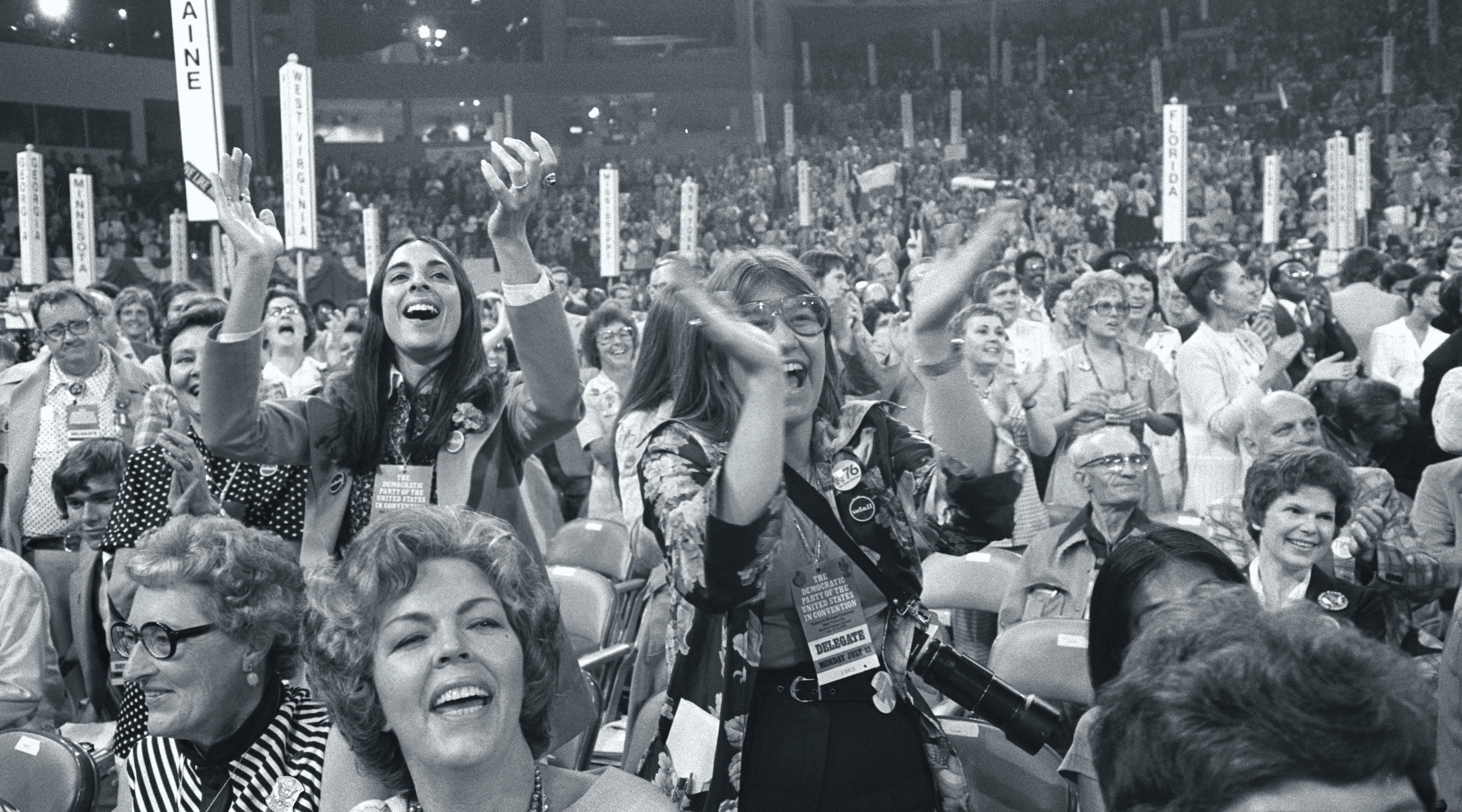 The more than 3000 delegates to the Democratic National Convention approved by loud applause early today a statement praising Israel for its rescue of hostages in Uganda and urged United Nations action against international terrorism. The statement by Minnesota Gov. Wendell R. Anderson, chairman of the platform committee, declared that the “United Nations must act on this issue directly or risk alienating the American people.”

Anderson made his statement shortly after midnight and moments before the convention adopted its platform for the 1976 Presidential election campaign. He said the hijacking of the Tel Aviv-to-Paris Air France plane took place after the platform was written but he felt it could not be adopted without his making what he called a “personal” statement on the hijacking and the rescue.

“Decent people everywhere were appalled” by the hijacking and the threat to the hostages, Anderson said. “And decent people everywhere rejoice at Israel’s daring rescue of these hostages.” Anderson noted that Americans learned of the Israeli rescue mission on July 4 and said that the Entebbe operation will go down in history as very much a landmark for independence as is Valley Forge.

The Minnesota governor said the UN was “obligated” to coordinate measures against international terrorism including action against countries that support, aid or harbor terrorists. He said if the UN does not act then the U.S. must lead the efforts against terrorism. He also said that the U.S. must provide support to countries such as Kenya which “uphold international morality.”

The loud applause from the delegates came when Anderson concluded by saying “join me in expressing these sentiments so loud that they can hear them over at the UN.” Anderson’s statement was reportedly suggested by Daniel P. Moynihan, former U.S. Ambassador to the UN, and approved by the Carter forces. It was the only statement allowed last night that did not pertain to approving the positions already in the platform.

The platform itself, which was exactly as adopted by the platform committee last month, describes the “cornerstone” of American policy in the Middle East as “a firm commitment to the independence and security of the State of Israel,” but mentions the plight of Soviet Jewry by implication only. The platform takes a middle-of-the-road position on all issues as part of the efforts by the expected Democratic Party Presidential nominee Jimmy Carter to bring all elements of the party together.

The section in the platform on the Middle East says that the “special relationship” between the U.S. and Israel “does not prejudice improved relations with other nations in the region. Real peace in the Middle East will permit Israel and her Arab neighbors to turn their energies to internal development, and will eliminate the threat of world conflict spreading from tensions there.”

The Democratic policy statement called for a “realistic, pragmatic approach” to the Mideast conflict; continued military and economic aid to allow Israel to maintain its “deterrent strength” and “the maintenance of U.S, military forces in the Mediterranean adequate to deter military intervention by the Soviet Union.”

It also calls for opposition to an imposed settlement from outside and support of American efforts to bring about “direct face-to-face” negotiations between all parties in order to achieve “normalization of relations and a full peace within secure and defensible boundaries”; urges that the United States Embassy in Israel be moved from Tel Aviv to Jerusalem, and states that the free passage of shipping be permitted through the Suez Canal.

“We recognize that the solution to the problems of Arab and Jewish refugees must be among the factors taken into account in the course of continued progress toward peace,” the platform said. “Such problems cannot be solved, however, by recognition of terrorist groups which refuse to acknowledge their adversary’s right to exist, or groups which have no legitimate claim to represent the people for whom they purport to be speaking.” This is an obvious reference to the Palestine Liberation Organization.

There is no mention of the occupied territories in the platform. However, Carter is on record as saying that a Mideast peace requires Israeli withdrawals, although he would not pressure Israel to give up Jerusalem or positions on the Golan Heights.

The platform also stressed that “We steadfastly oppose any move to isolate Israel in the international arena or suspend it from the United Nations or its constituent bodies.” In a section on the UN, the Democrats call for the U.S. to continue playing a strong role in the UN while making efforts to reform and reconstruct it.

“The heat of debate at the General Assembly should not obscure the value of our supporting United Nations involvement in keeping the peace and in the increasingly complex technical and social problems…,” the platform said. “But we must let the world know that anti-American polemics is no substitute for sound policy and that the United Nations is weakened by harsh rhetoric from other countries or by blasphemous resolutions such as the one equating Zionism and racism.”

The Mideast section of the platform also stated that “we support initiation of government enforcement action to insure that stated U.S. policy in opposition to boycotts against friendly countries–is fully and vigorously implemented.”

The only reference to the Soviet Union in the platform was by implication in the faction on U.S.-Soviet relations which said that “We should continually remind the Soviet Union, by word and conduct, of its commitments in Helsinki to the free flow of people and ideas and of how offensive we and other free peoples find its violations of the Universal Declaration of Human Rights.” Basically the same reference was made last night by former Ambassador Patricia Harris who introduced that section to the convention.

Sen. Frank Church of Idaho, who was a Presidential contender and is now among those considered by Carter as his running mate for Vice-President, also referred to the Soviet Jewry issue by implication although somewhat more directly than the platform. Church, in introducing the foreign policy section, said that “we should restore the American tradition of concern for human rights including the right to emigrate.”

The reticence to mention the Soviet Jewry issue directly may be due to Garter’s position in support of quiet diplomacy to achieve immigration rather than public pressure.

Church, in his speech, also rejected suggestions that food be used as a weapon against the Arabs. “I’m for selling the Arabs all the food they can buy, I am just against selling them so many weapons,” he said to loud applause. However, Carter in a television interview earlier this week said that if the U.S. was again faced with an oil embargo, he would immediately impose a counter-embargo covering food, weapons and oil-drilling equipment.