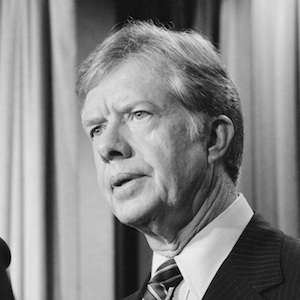 President Carter today received a Yemenite shofar from the Synagogue Council of America (SCA) as “a symbol of his pursuit of freedom for all people” and was also presented with a citation in the form of an acrostic that spelled out the name Jimmy Carter and also spelled out tributes to his devotion to worldwide human rights. It was the SCA’s first International Human Rights Award. Some 50 rabbis and lay leaders from the SCA made the presentation to Carter in the Rose Garden of the White House.

Accepting the two presentations, Carter said that “the shofar is symbolically very important to me” and added that “there is no question the whole world needs to be awakened from its slumber on human rights.” He noted that human rights “transcends differences among our people” and that “we have espoused the cause of human rights for persons to leave the Soviet Union to escape persecution, to reunite families, to be able to speak without fear or punishment.”

Saying he was “encouraged by your recognition that I stand for what our nation represents,” the President concluded by saying: “I accept this with gratitude because you have recognized that the President of the United States ought always to withstand any pressure that contravenes the furtherance of our basic commitments, our basic beliefs, our basic principles, our basic obligation to our fellow human beings and our obligation to the God we worship.”

Rabbi Arthur Lelyveld, President of the SCA, which is the coordinating organization of Conservative, Orthodox and Reform Jews, said the SCA was “one in admiration of the fact that you have made the pursuit of freedom for all people of a primary concern. We of the Jewish community are particularly grateful for the direct efforts you have made in behalf of the ‘Prisoners of Conscience’ in the Soviet Union, and we pray that, with your support, all of those still unjustly held will ultimately find release.”

Pointing out that the shofar has become a symbol of the High Holy Days to arouser people to fulfill their responsibility, Rabbi Bernard Mandelbaum, executive vice president of the SCA, who presented Carter with the shofar which came from Israel, declared: “On this day, the sound of the shofar symbolizes the clarion call from President Jimmy Carter to the nations of the world and to individual men and women within these nations, all created in God’s image. to make real our most sacred possession — human rights for all, in the uplifting creative climate of freedom and liberty.”