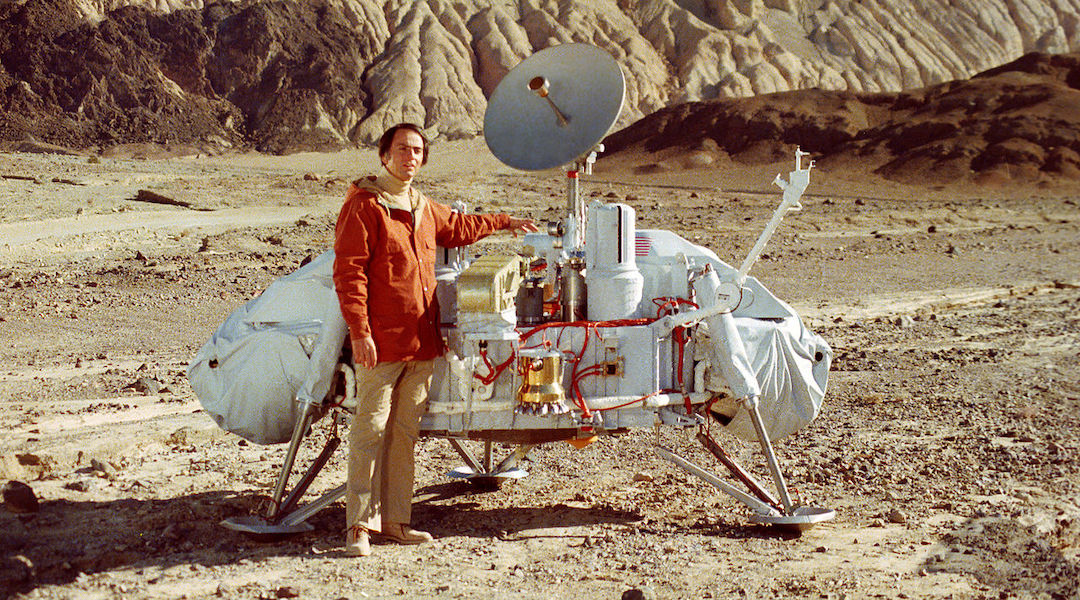 Sagan with a model of the Viking lander that would land on Mars. (Wikimedia Commons)
See Original Daily Bulletin From This Date
Advertisement

Dr. Carl Sagan, the space scientist known for his struggle against the nuclear arms race, has voiced strong opposition to Israel’s joining the U.S. “Star Wars” (Strategic Defense Initiative) program, which Israel has indicated it is ready to do.

Sagan expressed these views in an exclusive interview with JTA on the eve of his receiving the Shalom Center’s first Brit HaDorot (Convenant of the Generations) Peace Award at the Plaza Hotel here. The Award, shared with Boston’s Jewish Coalition for a Peaceful World, was recently presented to Jews who work to prevent a nuclear holocaust.

The scientist and author, who is the David Duncan Professor of Astronomy and Space Sciences and Director of the Laboratory for Planetary Studies at Cornell University, is engaged in researching and alerting the world to the threat of a “nuclear winter” as the consequence of an atomic war, and to preventing such a war.

Sagan rejected the theory, advanced by some Jews, that a reduction of nuclear weapons by the United States would create an “imbalance” vis-a-vis the Soviet Union and thus leave Israel more vulnerable in the Middle East.

“All this is simply buying the baloney of the Reagan Administration,” he said. “The actual situation is that the Soviet Union can destroy the U.S. many times over, and the U.S. can destroy the Soviet Union many times over. Both sides have an invulnerable nuclear capability, and therefore the idea of an imbalance is silly. “He called the number of nuclear weapons in the world — 60,000 — “obscene.”

Furthermore, Sagan said, it is a “mistake to think of Israel’s survival … as determined only by what happens in the Mideast. A nation can be utterly destroyed in a nuclear war even if no nuclear weapons are dropped on its territory. We are all dependent on each other.” Avoidance of nuclear war must be the first priority for the Jewish community–and everybody else, he said.

Asked whether such cooperation is justified because of Israel’s struggle for survival, Sagan retorted: “Is everything permissible, no matter what principle, in terms of perceived national survival? Would that have an acceptable (justification) for people siding with the Nazis in World War II? What did Jews think about that?”

The same “survival justifies everything” view by some U.S. government agencies after World War II led them to import German scientists who had worked with the Nazis, for the purpose of building rockets here. “It goes straight to U.S.-Soviet enmity,” he said, which is also the issue in the nuclear arms race. “The question is, is anything permissible in the case of opposing the Soviet Union?”

Sagan believes that the most likely conclusion that would emerge from an independent commission’s investigation of the importation of those scientists and other experts — proposed by Brooklyn District Attorney Elizabeth Holtzman, a former New York Congressional Representative — would be that “we thought it more important to have weapons to fight the Russians than to prosecute the criminals of World War II.”

CITES THE INFLUENCE OF HITLER

The development of rockets, and of nuclear fission, were not the only “legacy” of Nazi Germany, said Sagan. In a major address at the World Jewish Congress convention in Jerusalem earlier this year, he said that “Nazi Germany has provided us with an armory–the means and the attitudes sufficient for nuclear obliteration.” Sagan continued:

“I am struck by how profoundly (the U.S. and the USSR) are influenced by Adolf Hitler. Each nation acts as if a Hitler is in charge of its adversary. Each threatens the other with instruments of mass destruction developed in Nazi Germany. Each uses propaganda techniques refined in Nazi Germany.”

Sagan was asked by JTA whether Jews, because of the Holocaust, should have some special perspective on nuclear war — or a “duty to warn that this planet can be transformed into a crematorium,” as one rabbi put it. He replied:

“Those who have experience with mass murder organized by the nation-state, but also with propaganda and deceit organized by Hitler Germany, ought to be especially sensitive to similar activities by various nation-states.”

But at the same time Sagan, when asked whether his being Jewish influenced his efforts to help prevent nuclear war, answered, “not especially.” The world, he told JTA, is at grave risk, and everybody — all religions, races, and ethnic groups — “are all in this together.

“There is no special ethnic or religious sensibility that applies here,” he said. “In fact, it is the very opposite: the fact that we are all equally threatened has some potential of bringing us together.” Jews, like all other groups, should put preventing a nuclear holocaust at the top of their list of priorities “not because they are Jews but because they are human.”