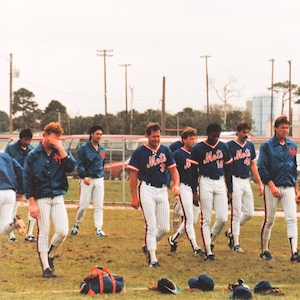 This Yom Kippur, some Jews may be contemplating not only their own misdeeds, but also one they consider to have been committed by the Commissioner of baseball.

The beloved New York Mets professional baseball team is scheduled to play one and maybe two National League playoff games here in the world’s largest community of Jews on the holiest day of the Jewish calendar.

The Mets will play the fourth of a best-of-seven-game series with the Houston Astros at 8:20 p.m. Sunday, October 12 at Shea Stadium here. The fifth game, if necessary, would take place at 3:10 p.m. Monday.

Although the decisions in years past by Hall of Famers Hank Greenberg and Sandy Koufax not to play important baseball games on Yom Kippur won universal respect, some Jewish Mets fans no doubt are feeling a wee bit torn, if not angry.

Yet, the Jewish agencies have decided not to go to bat for them, although their leaders, some of whom are baseball fans, were displeased with the scheduling of the games.

Rabbi Alexander Schindler, president of the Union of American Hebrew Congregations, urged Jewish baseball fans to follow the example of Greenberg and place the sanctity of Yom Kippur above that of baseball.

“The scheduling this year is unfortunate, but as Jews we have no right to impose our religious calendar on the rest of the country,” he said. “Doing without the Mets for one day,” he added, “might even have the effect of reminding Jewish fans of their religious obligations.”

Nathan Perlmutter, national director of the Anti-Defamation League of B’nai B’rith, said Jews can’t demand rescheduling because the Mets are “a private enterprise.” He told the JTA that Jewish baseball fans “will know what to do” about this dilemma. “I’m a baseball fan. This poses absolutely no problem.” He said ADL has made no contact with the Commissioner of baseball, Peter Ueberroth, over the schedule and doesn’t plan to.

The same goes for the American Jewish Committee. The agency’s executive vice president, Dr. David Gordis, last month urged in response to a reporter’s question that the games be rescheduled. But he said he doubted that AJCommittee would deal with the issue any further, explaining that it wasn’t important enough and that the scheduling was only an inconvenience that likely was unintentional.

NOT OF MAJOR CONCERN

The American Jewish Congress has had no comment pro or con. “We felt really that it was not of such a major concern,” explained Israel Levine, director of communications.

The Jewish Community Relations Council of New York also has taken no position, contending “that baseball is separated from religious life,” according to Michael Miller, executive director.

However, Miller said that after the playoffs he “would probably be shooting off a letter” asking that Ueberroth take into consideration important dates of all religions when scheduling games. That would “allow all religious baseball fans to enjoy without guilt,” he said.

Miller added that he was encouraged by the Jewish organizations’ public statements. “Take a look from where we’ve come,” he said, when Jews used to express no outrage at such scheduling.

That feeling was echoed by Rabbi Wolfe Kelman, president of the Rabbinical Assembly. But he cautioned that “this is not one of the great issues of our time.”

TRIED TO ALTER THE SCHEDULE

The so-called offensive playoff schedule is the creation of Ueberroth’s office, according to a spokesman, Richard Levin. “Unfortunately this year Yom Kippur came in the middle” of the playoffs, he said. “We really regret it.” In the American League playoffs, only the fifth game, if necessary, would be played on Yom Kippur–at 3 p.m. October 13 in Anaheim, Calif.

Once the Commissioner’s office realized the National League conflict, it unsuccessfully tried to alter the schedule, Levin said. However, the playoffs couldn’t begin earlier because only one day off separated them from the regular season. Neither could they begin later, because the World Series, the culminating event of the season, runs into late October, which presents risks of inclement weather.

Why then wasn’t the Sunday night game moved to the afternoon and the Monday afternoon game to the evening, so they wouldn’t fall on Yom Kippur? Levin said the Commissioner’s office suggested those changes during late July and August to the televiser of the games, ABC-TV, which refused.

An ABC programmer, Karen Dyton, denied that Ueberroth’s office tried for six weeks to change the schedule. “They did not once suggest changing the schedule until about a month ago,” she told the JTA.

By then, it was too late to make a change because of contractual obligations to other concerns, according to Dyton. Besides, she said, ABC all along was “merely following the schedule that major league baseball gave us…Whenever they schedule the games, we put them on.”