Israelis See Painful Lessons to Be Learned from Pollard Case 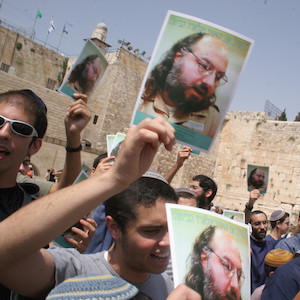 Israeli leaders and Knesset members across the political spectrum agreed Thursday that U.S.-Israel relations were seriously damaged by the case of Jonathan Pollard, who was sentenced to life imprisonment by a federal court in Washington Wednesday for spying for Israel.

Pollard’s wife, Anne Henderson-Pollard, was sentenced to five years as an accessory. While there was some sympathy here for the tragic couple, the overriding consensus is that Israel has painful lessons to learn from the episode and that it must punish those involved with Pollard in what the government claimed from the outset was a “rogue operation.”

“The (Pollard) trial was not the trial of a nation, but of an individual,” Vice Premier and Foreign Minister Shimon Peres said Thursday, reacting to the news of the stiff sentences. He noted that Israel had “made it clear before the trial” that Pollard’s case was a big mistake. “The error was big, but it remains an individual case and I would not draw any collective responsibility from it.”

He added that he hoped “it would never happen again,” and that indeed is the lesson learned from the affair.

Pollard, a former U.S. Navy civilian analyst, pleaded guilty to the spying charges after his arrest in 1985. In Jerusalem Thursday, Labor MK Abba Eban, chairman of the Knesset’s Foreign Affairs and Security Committee, and its former chairman, Likud MK Eliahu Ben-Elissar, agreed that the case had damaged Israel’s special relationship with the U.S. “This might be the toughest time in the history of Israel’s foreign relations,” said Eban, a former Foreign Minister.

He stressed the “terrible responsibility” of those who had mounted the Pollard spy operation. He demanded that the government explain why it appointed one of them, Rafi Eitan, to the prestigious civilian post of chairman of Israel Chemicals and why another, Air Force Col. Aviem Sella, recently was promoted.

Ben-Elissar, once a Mossad operative, called for a thorough investigation of the role of Israelis in Pollard’s spy operation. Premier Yitzhak Shamir, the Likud leader, went on record this week as opposed to any further inquiry.

“I do not underestimate the gravity of the damage” to U.S.-Israel relations, Ben-Elissar said. He said it would be long-lasting and that the “aspect of dual loyalties” would be harmful for American Jews.

MK Mordechai Virshubski of the Shinui Party demanded the resignations of Ariel Sharon and Moshe Arens, Minister of Commerce and Industry and Minister-Without-Portfolio respectively in the unity coalition. Both are former Defense Ministers and Virshubski said they should leave the Cabinet because of their previous ministerial responsibility for setting up the “Lekem” intelligence unit which drafted Pollard.

Lekem, headed by Eitan, has since been disbanded. Yossi Sarid of the Citizens Rights Movement (CRM) urged that Eitan be fired from Israel Chemicals.

The National Religious Party declared that all those responsible must be held to account, as Israel originally promised the U.S. The NRP seemed to be referring specifically to Col. Sella who has been described as Pollard’s “handler.”

The media expressed sorrow for Pollard and his wife. Some newspapers blamed U.S. Defense Secretary Caspar Weinberger for Pollard’s life sentence because of his testimony to the court that Pollard’s espionage severely compromised U.S. intelligence.

Ben-Elissar had no criticism of the American judicial process. “However much it hurts to say this, the Pollards were traitors to their country, and I say this even though it was my country that benefitted from their treachery,” he said.