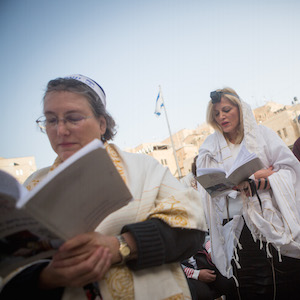 On Wednesday, the Supreme Court turned down the petition of the women, who sought to pray aloud at the Western in the face of violent opposition by fervently Orthodox groups.

Nevertheless, the Women of the Wall, as they have come to be called since they filed their petition in 1989, claimed a partial victory.

They pointed to the court’s call for the establishment of a government committee to investigate the matter and to find a way to balance the needs and sensitivities of all the worshippers at the Wall.

The high court also issued a separate ruling that the nation’s local religious councils, which dispense basic religious services to all Jews, could not exclude non-Orthodox members.

This decision was hailed by the petitioners as a “milestone ruling” that advances the cause of religious pluralism in Israel.

The decision ion the Women of the Wall was “extremely positive,” said Bonna Haberman, the group’s founder. “The Supreme Court has demanded that the state recognize that women’s voices, our freedom of access and our right to prayer are included in the mosaic of religious pluralism at the holy site,” she said.

Miriam Isserow, the attorney for the Israel Women’s Network, however called the decision “very disappointing” and charged that it “bowed to the demands of the ultra-Orthodox.”

Rabbi Yehuda Getz, who oversees religious practices at the Wall, was equivocal as he walked out of the courtroom.

He called the ruling “neither here nor there” and said he trusted the government committee charged by the court to investigate the matter would use “common sense” in making a final decision.

Rabbi Simha Meron, a lawyer and former director of Israel’s rabbinical courts, was among those representing the Orthodox position in the case.

He expressed confidence that the government committee would “find ways around” the women’s claim that they have a right to pray the same way men do, which he said is “not according to halacha,” or traditional Jewish law.

Until the committee renders its decision, he said, religious activities at the Wall will continue to fall under the authority of the Orthodox rabbinate.

The women’s petition was filed in 1989, several months after the group of mostly Orthodox women began to pray together each Rosh Chodesh, or new month, in the women’s section of the Wall.

They sang aloud, wore prayer shawls and read from the Torah, in the same fashion as the men on the other side of the low partition dividing the two sections.

Each time the women prayed, they were harassed by the fervently Orthodox groups, who claimed the women were violating Jewish law.

They also maintained that because the women were praying with raised voices, they were distracting the men from worship.

Women are permitted and even encouraged to pray at the Wall, they maintained, but they should do so silently.

The hostility culminated in a violent attack on the women in March 1989, when police were called in to disperse the crowds with tear gas.

The women subsequently filed petition with the Supreme Court, calling for the Religious Affairs Ministry, the chief rabbis, the police and fervently Orthodox political parties to show why the authorities failed to protect them as they exercised their right to pray as they saw fit.

Since then, the group has dwindled a few dozen, but it has continued to pray each month at the Wall. The group has been subject to a court order, however, barring them from praying with a Torah and with prayer shawls.

The court on Wednesday rejected their claim to an unqualified right to pray as they wish, but called on the yet-to-be-formed government committee to examine how to take into account the feelings of all the worshippers.

For most of the women this was a partial victory.

Deana Fein, a law students and members of the group, said the ruling avoided an outright confrontation with the fervently Orthodox, who, with their political clout, might respond by passing new legislation codifying “the supremacy of Orthodox customs at the Wall.”

“It is a step in the right direction, (but only) the beginning of a long process,” said Anat Hoffman, a member of the Jerusalem City Council and a feminist activist.

“We say we have a right to recite the Shema Yisrael in a normal voice and should not be deterred by violence,” she said, explaining the group’s position prior to the ruling. Having a “voice is the core of the issue.”

“There has been a hard sell of the Wall as a symbol of Jewish unity, but it (has been) for men only,” Hoffman added.

Meanwhile, the ruling on the religious councils invalidated decisions by the Tel Aviv and Jerusalem councils to reject Reform and Conservative candidates.

The court, in a unanimous ruling, said the candidates may be barred on the basis of their affiliation with non-Orthodox Jewish movements.

The decision also will apply to the Haifa council, which has held up non- Orthodox appointments pending the court’s ruling.

The local councils, supervised by the Religious Affairs Ministry, have exclusive jurisdiction over marriage, kashrut, burial and other religious matters for all Jews living in Israel. The services provided by the councils are rendered according to Orthodox practice regardless of the affiliation or religious customs of the individual receiving the service.

The court’s decision this week is “groundbreaking” because it “breaks the Orthodox monopoly on religious councils,” said Joshua Schoffman, director of the Association for Civil Rights in Israel, which filed the petition on behalf of the candidates rejected in Jerusalem.

“We’ve been waiting 4-1/2 years,” said Rabbi Ehud Bandel one of the Masorti, or Conservative, candidates for the Jerusalem council. “It’s a great victory in one battle, but the war continues.”

“It is for religious pluralism, not against the Orthodox,” he added. “We are religious people and are interested in (providing) religious services.”

Bandel said he hoped the decision would “penetrate into the Knesset” so that non-Orthodox marriages will be legalized.

Rabbi Uri Regev, head of the Reform Movement’s Israel Religious Action Center, filed the petition on behalf of the candidates in the Tel Aviv council and called the ruling a “milestone decision.”

“We will go to work right away and make sure that not only in Jerusalem and Tel Aviv, and incidentally Haifa, but all other municipalities, the (non-Orthodox) candidacies will be advanced.”

Rabbi Meron, who was also involved in the religious councils case, sharply decried the court’s ruling. He said it opened the way for those “who are against halacha” to serve on the councils and “fight against what they do.”

He said he feared the non-Orthodox members would not approve allocations to mikvehs, or ritual baths, because they do not believe in them.

Meron said he thinks the ruling may lead to the dissolution of the councils. There is no use for them, he said, if “they reflect the same people who are on the city councils.”