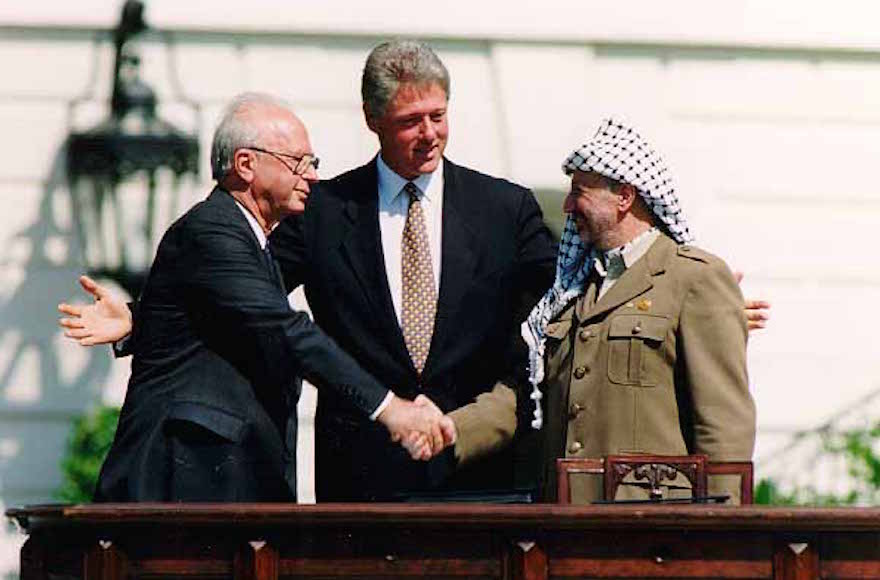 Prime Minister Yitzhak Rabin has vowed that the peace process with the Palestinians would continue despite this week’s terrorist attack on a computer bus on the outskirts of Tel Aviv.

Monday’s attack, which killed five Israelis as well as the suicide bomber who detonated the blast, drew condemnation from world leaders, including top Arab officials.

Soon after the incident, Palestine Liberation Organization leader Yasser Arafat phoned Rabin to extend his condolences to the victims’ families. Earlier in the Gaza Strip, Arafat had condemned the bombing, calling it a terrorist attack aimed at sabotaging the peace process.

King Hussein of Jordan also phoned Rabin to condemn the attack and extend his condolences, as did U.S. Secretary of State Warren Christopher.

President Clinton, in a written statement, said he joined “with all those working for peace in expressing our outrage and condemning in the strongest possible manner this brutal act.”

The attack, the third suicide bus bombing inside Israel in nine months, came on the eve of a July 25 deadline Israel and the Palestinians had set for completing an agreement on expanding self-rule in the West Bank.

Rabin, who said the Israeli-Palestinian negotiations would continued after funerals were held for the victims, reaffirmed Israel’s commitment to the peace process.

“A small Israeli-Palestinian team will determine the time and place for continuing the talks,” he told reporters at the Knesset. “We must not let the murderers from the Islamic Jihad and Hamas achieve their goal.”

The Israeli opposition, meanwhile, has called on the government to halt all negotiations immediately and to hold early elections.

In the Knesset, the opposition introduced five no-confidence motions against the government — all of which were defeated.

During the debate, Likud leader Benjamin Netanyahu blasted Rabin, asserting that the time had come to take action against terrorists, instead of rewarding the Palestinians with more concessions.

Earlier, Weizman called on the leaders conducting negotiations to consider their actions carefully before deciding how to proceed.

“It can’t go on like this,” said Weizman, who is the past has urged the suspension of negotiations because of terror attacks.

The five Israelis killed in the attack were identified as Moshe Shkedi, 75, of Ramat Gan; Zahava Oren, 60, of Tel Aviv; Zvia Cohen, 62, of Ramat Hehayal; Rachel Tamari, 65, of Tel Aviv; and Nahama Lubovitch, 61, of Tel Aviv. The remains of a sixth person were believed to be those of the terrorist.

Of the 33 people wounded in the attack, 25 remained in the hospital on Monday night. Three were listed in critical condition. The majority of injuries were listed as moderate to light.

Protests and prayer vigils took place at several locations in Israel on Monday, including at the site of the attack, where the debris had been cleared away by Monday night and replaced by memorial candles lit by passers-by.

As of late Monday night, police were still unsure of the bomber’s identity and the organization to which he belonged.

Shortly after the attack, an anonymous caller phoned news organizations, claiming responsibility in the name of the Hamas fundamentalist group.

But Israel Television reported that Israeli security sources discredited the caller’s claim, saying the same person was known to have called after previous terror attacks.

A caller to Israel Radio’s Arabic service said the attack was the work of Hamas member Yehiya Ayash, known as “the engineer,” who is believed to have masterminded previous bomb attacks against Israelis.

The explosion took place at about 8:40 a.m. local time, as the Number 20 Dan bus was taking passengers from Ramat Gan to Dizengoff Street, in central Tel Aviv.

As the bus approached the 40-story Diamond Exchange in Ramat Gan, a huge explosion tore through it.

Eyewitnesses said the blast thrust body limbs out of the bus and left singed bits of flesh inside.

“There was a huge explosion,” one female witness told Army Radio. “Hands flew in the air and heads flew from the windows of the bus. It was unbearable.”

Emergency medical teams and rescue crews arrived minutes after the blast and began clearing away he dead, treating the wounded and checking for any additional explosive devices.

Most of the wounded were evacuated to nearby Ichilov Hospital, where relatives anxiously searched lists of the wounded and gathered around television sets to watch reports broadcast live from the scene of the blast.

Through the day, hundreds of people responded to an appeal to donate blood.

Although hospital officials said they had enough supply to treat the wounded, they said that national reserves were low during the summer months.

The force of the explosion shattered windows in buildings in the diamond district and caused extensive damage to the surrounding area.

Police said the bomber had probably gotten on the bus at a previous stop near the Ramat Gan Mall, where Arab laborers often wait to be picked up for work.

A huge hole in the center of the bus indicated where the suicide bomber had stood before detonating the device, police said.

They said the bomb was most likely a pipe packed with explosive weighing about 5 pounds — smaller than the devices used in the Jan. 22 terror attack near Netanya and the Oct. 19, 1994, bombing of a Tel Aviv bus. More than 20 people were killed in each of those attacks.

Immediately after Monday’s blast, a total closure was imposed on the Gaza Strip and West Bank.

In the wake of terror attacks during the past year, Israel strictly limited the number of Palestinians is allowed to work inside Israel, drawing sharp protests from the PLO about the economic hardships to innocent Palestinian people caused by the closures.

Until Monday’s attack, some 34,000 Palestinians were working in Israel, compared to more than 100,000 in past years.

Arriving at the scene to survey the situation, both Shahal and Rabin had to be protected from angry protesters shouting anti-government slogans.

Rabin later said that he was shocked by the devastation and that he understood the hurt of Israelis.

Addressing the Labor Party caucus later in the day, Rabin rejected reports that the PLO had persuaded the fundamentalist groups Hamas and Islamic Jihad to call off attacks against Israelis until Arafat assumes control in the West Bank.

He said the relatively quite and terror-free period during the past few months was due to Israeli security operations and to a crackdown by the Palestinian Authority on Islamic militants.