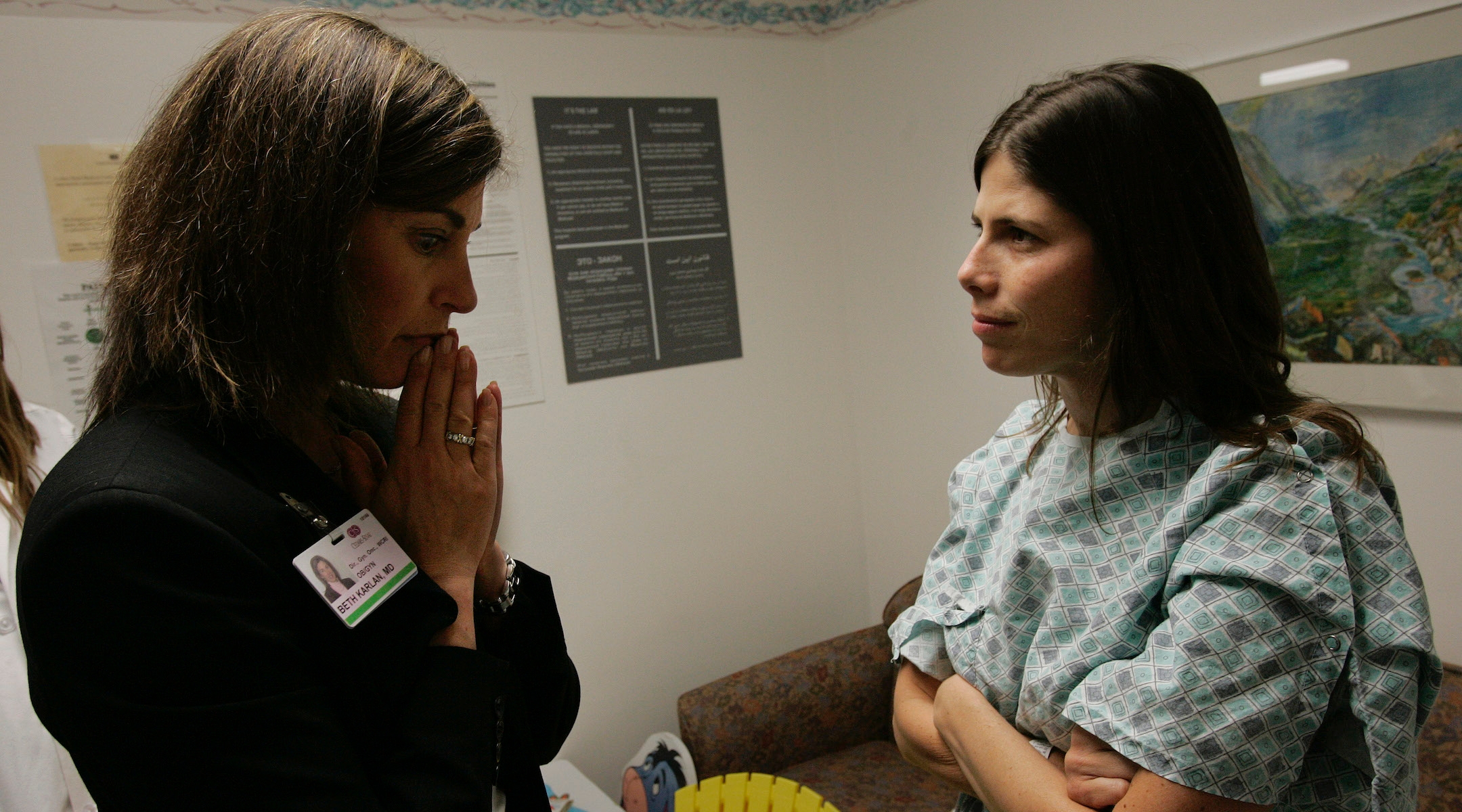 Dr. Beth Karlan, left, with Anna Gorman, who has the BRCA1 genetic mutation, at the Women's Cancer Research Institute at CedarsSinai in Los Angeles in 2006. (Anne Cusack/Los Angeles Times via Getty Images)
See Original Daily Bulletin From This Date
Advertisement

A new finding that as many as 1 percent of American Jewish women of Ashkenazi descent have a breast cancer-causing genetic defect means that breast cancer has become the most common genetically caused disease in the Jewish community.

The defect is also found in Jews at least three times more often than in the general American population, the study found.

The discovery was a joint effort by American and Israeli researchers, led by the United States’ National Institute of Health, which are based in Bethesda, Md., and Hadassah Hospital, located in Jerusalem.

“With every bit of new information we can find we’re that much closer to a cure,” said Judy Garner, national chairwoman of Hadassah Cares, Hadassah’s breast cancer awareness program.

“Our government has to fund a lot more breast cancer research. We can’t put our heads in the sand,” she said.

The finding, published in the October issue of the medical journal Nature Genetics, is based on a study of blood samples from 858 American Jews whose ancestors were from Central or Eastern Europe.

Between 80 percent and 90 percent of American Jews are of Ashkenazi heritage.

The question of whether the mutation was linked to Jewish ancestry was raised because several Jewish participants in the initial study were found to have a mutation of the very same gene.

None of the 815 non-Jews in the sample whose findings were just reported had the same defect.

The finding raises questions about whether all 6 million American Jews should be encouraged to test for the mutation.

Two larger-scale studies are immediately getting under way to determine whether this is, in fact, the next step.

The National Cancer Institute, based in Washington, is conducting a study of 4,000 to 5,000 Jewish women and men in the Washington and Baltimore areas.

The study, which will involve testing for the BRCAI mutation and extensive family medical histories, is expected to be completed next spring.

A similar study will be conducted in New York.

“This exciting finding should allow us to move rapidly toward our goal of identifying high-risk women and helping them to prevent breast cancer before it strikes,” said Donna Shalala, U.S. secretary of Health and Human Services, in a statement from the National Institutes of Health.

In recent years, scientists – and Jewish women – have noticed that breast cancer seems much more prevalent in the Jewish community than among non-Jews. Being Jewish has even ranked inclusion on the list of risk factors determined by researchers.

But some observers say that much of the breast cancer among Jews may not be because of ethnicity or religion, but because of the way Jewish women live.

Earlier studies found a 10 percent to 20 percent higher rate of breast cancer among Jewish women than non-Jewish, but suggested that the increase was based on diet and other nonhereditary factors.

For example, higher rates of breast cancer are found among women who do not bear children or who give birth for the first time after age 30.

Jewish women are twice as likely as non-Jewish white women to be more extensively educated and remain single – and therefore less likely to give birth – through their early 40s, said Susan Weidman Schneider, editor of the Jewish women’s magazine Lilith.

“Jewish women are not only the best-educated women in America today, but it certainly looks like they are ethnic group most likely to get breast cancer,” said Schneider, whose quarterly magazine first examined the links between breast cancer and Jewish heritage in an article by Yael Green in 1994.

The current issue includes three stories about being Jewish and having breast cancer.

The articles in Nature Genetics about the Ashkenazi mutation on BRCAI was written by Drs. David Goldgar and Philip Reilly.

North American Jewish women with Ashkenazi ancestors are not the only ones to have an extraordinary link to breast cancer.

In an earlier study, similar link was documented more than a year ago by Hadassah Hospital researchers, who found a significantly higher incidence among Ashkenazi immigrants to Israel than among immigrants from Sephardi, or Middle Eastern, countries.