On the Election Trail: Buchanan Defending Israel? In Another Era, It Happened 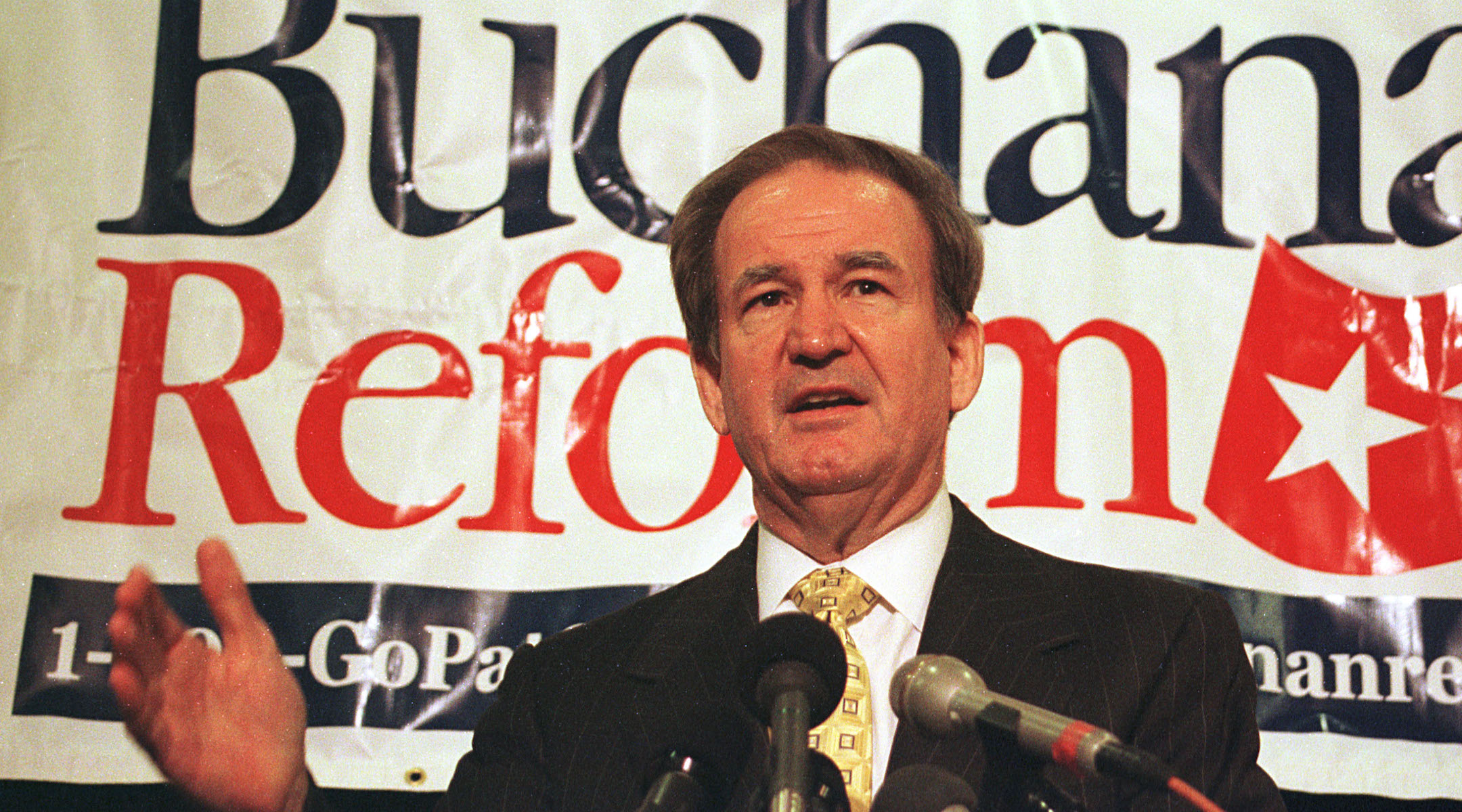 When Israel was battling to buy American arms in the early 1970s, Pat Buchanan, a speech writer in the Nixon administration, lashed out at a White House strategy meeting on behalf of the Jewish state.

He labeled the State Department ” a bunch of striped pants pro-Arabists” who were leading the charge to deny Israel much-needed fighter jets.

Nearly two decades later, as Iraqi Scud missiles fell on Tel Aviv, Buchanan took to the airwaves to declare that Israel is “a strategic albatross draped around the neck of the United States.” Buchanan also seized the occasion to label Capitol Hill “Israeli-occupied territory.”

And in perhaps the most notorious of what he terms his “golden oldies,” Buchanan railed against Jewish advocates of the Gulf War.

“There are only two groups that are beating the drums for war in the Middle East – the Israeli Defense Ministry and its amen corner in the United States,” he said.

From Israel proponent to Israel antagonist – what happened on the way to Buchanan’s presidential campaign trail?

Buchanan’s record is increasingly being scrutinized because even though he is a longshot for the Republican presidential bid, his support is growing rapidly. Many in the party fear the impact he could have at the Republican convention come August.

“Pat took a traditional conservative positive on Israel when the Soviet Union was around,” said Victor Gold, a self-described longtime friend of Buchanan, who worked with the candidate in the Nixon White House.

Buchanan, 57, served as an aide and speech writer under Presidents Nixon and Ford. President Reagan named him the White House director of communications during his second term.

Buchanan, a fierce anti-communist, “saw Israel as the West’s friend fighting against the Soviet Union” when Egypt and Syria were in the Russian camp, said Gold, now the national correspondent for the Washingtonian magazine and the co- author of President Bush’s autobiography.

Buchanan remained pro-Israel – though never “pro-Jewish” – his friends say, until the intifada, when he empathized with the Palestinian uprising, which erupted in 1987. The shift in attitude became complete with the end of the Cold war.

It was this radical shift, epitomized by his remarks before and during the Gulf War, that led to public charges of anti-Semitism by former colleagues and friends, including the most prominent conservative columnists.

His indiscriminate use of anti-Semitic code words to support his policy positions, his praise of Hitler as “an individual of great courage,” and his defense of Nazi war criminals and flirtations with Holocaust denial theories alienated even those who had given him the benefit of the doubt.

“I don’t believe that he’s an anti-Semite, but somewhere in his intuition he has a problem with Jews,” said another Jewish friend of Buchanan’s from his White House days who asked not to be identified.

Others have been less friendly.

When asked whether Buchanan is anti-Semitic, William Safire, a columnist for The New York Times and a colleague from Buchanan’s White House days has answered an unequivocal “yes.”

And in a 1991 issue of the conservative publication National Review, editor William Buckley Jr. wrote an extensive piece on anti-Semitism, devoting a major section to Buchanan.

“I agree with Pat on his objection to the Mexican bailout,” Gold said, but the people he railed against who supported the bailout were all Jewish bankers.

“There are a lot of non-Jewish bankers,” Gold said. “There is something beneath the surface here.”

It is this “problem with the Jews” – as well as extremist positions on a host of other issues – that has many Jews, Republicans and other voters seething at the success that the speech writer turned commentator turned presidential aspirant has found along the campaign trail.

The National Jewish Coalition, the Republican Jewish group whose leaders have condemned Buchanan from the outset of his campaign, turned up the heat last week, issuing a five-page paper that declared Buchanan’s positions the “antithesis” of the GOP’s positions and declared its “strong opposition” to his candidacy.

Aside from his offensive rhetoric, Buchanan has staked out positions on many issues strongly at odds with mainstream Republican views.

He has said he would impose a five-year moratorium on all legal immigration and turn welfare programs over to the states for five years, at which point he would end federal support outright.

Buchanan attributes the rise of violence and pornography in the United States to the lack of prayer in schools. He would push for a constitutional amendment that would bring prayer back to America’s classroom and halt the “de- Christianization of America,” he said at a rally in New Hampshire last month.

Buchanan would also work for a constitutional amendment ending all abortions in America, including cases involving rape and incest.

In addition to his protectionist views on trade, Buchanan tells supporters at campaign stops that there would be no foreign aid in a Buchanan administration.

Addressing the issue of aid to Israel in particular, Buchanan said on a recent broadcast of Face the Nation on CBS: “While we don’t have a formal treaty alliance with [Israel], we’ve undertaken something of a moral obligation to help them defend their security and survival.”

If elected president, he continued, “I will begin phasing out economic aid, but the Israeli people will always have access to the arsenal of democracy so that they have the weaponry to defend themselves against any and all enemies.”

On the same broadcast, Buchanan said he would never station U.S. troops on the Golan Heights if Israel and Syria request them as part of a peace treaty.

To what extent a Buchanan presidency would or would not actually align itself with Israel is a matter of speculation, but whatever his current views on the Middle East, he is unlikely to make many Jewish friends.

For Rabbi Avi Weiss, a New York rabbi whose Coalition for Jewish Concerns-Amcha has dogged Buchanan during his race for the White House, “Buchanan is a smart anti-Semite. He doesn’t wear it on his sleeve.”

But, Weiss added “he is one of the most dangerous anti-Semites in America today.”

When four Jewish protesters from Weiss’ group rushed the stage during Pat Buchanan’s campaign announcement last March, Buchanan bellowed to his cheering throngs, “Now you see. This is what we’re fighting against.”

Buchanan is still fighting against jewish protesters. What AMCHA terms “truth squads” follow Buchanan at many stops along the campaign trail to protest his candidacy.

But there are at least tow Jews supporting Buchanan’s bid for the presidency, including Rabbi Yahuda Levin of New York, who serves as one of Buchanan’s four campaign co-chairmen.

Campaign officials repeatedly refused to comment on the charges against Buchanan, but finally referred the inquiries to Levin and another supporter, Rabbi Aryeh Spiro of Ohio.

Obviously, Levin said, “when he can point to a rabbi on his staff, Buchanan is using me for cover.

“But to the same extent I am using the Buchanan camp to communicate with 20 to 30 million Christians,” said Levin, a stringent anti-abortion, anti-gay rights conservative who has backed Buchanan for the last four years.

“I don’t have to be married to him or believe everything he says,” Levin said, defending his association with the campaign.

Levin ran for mayor of New York in 1985 on the Right to Life ticket against then-Mayor Ed Koch. He also ran against Democrat Rep. Steve Solarz as the Right of Life candidate in 1984.

Levin acknowledged that he “is troubled” by Buchanan’s “emphasis on defending Nazi war criminals.” “He feels that Hiter had courage. So what?” Levin said. “What does that say to us? On 80 or 90 percent of the issues I agree with him.”

Buchanan’s campaign has attracted many extremists, including a fellow campaign co-chairman, Larry Pratt, who is on a leave of absence to defend himself for attending rallies with Ku Klux Klan and militia leaders.

Other supporters, including some of his elected delegates, reportedly have ties to David Duke, the former Louisiana gubernatorial candidate who was a leader with the Klan.

Some former associates pointed to a recommendation given by Safire in a 1991 column as a good place for Buchanan to start to distance himself from his past and his extremist supporters.

“I can see how some wiseguy cracks of mine in the past can be taken as anti- Semitic,” Safire suggested that Buchanan say. “I did not mean to hurt or frighten any group of Americans, and to the extent I did I repudiate it right now.”

Buchanan has still not responded.