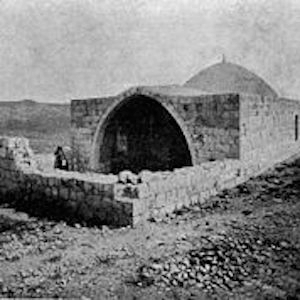 The remnants of more than 3,000 Jewish sacred books were buried here this week, bringing down the curtain on the worst act of desecration to be committed during last month’s outbreak of violence between Israelis and Palestinians.

The attack on Joseph’s Tomb took place during three days of violence in late September that claimed the lives of 15 Israelis and 61 Palestinians.

The Sept. 25-27 violence had been sparked by Israel’s opening of a new entrance to a tunnel located near the Temple Mount in Jerusalem.

Prompted by charges from their leaders that Israel was undermining Islamic holy sites, Palestinian stone-throwers joined armed Palestinian police for violent confrontations with Israelis that nearly brought the peace process to a halt.

On Sept. 26, the most violent of the three days, the fighting reached Nablus.

Although Israeli soldiers managed to save the Od Yosef Chai Yeshiva’s Torah scrolls, they were unable to salvage most of the books, the majority of which were burned.

According to Jewish law, holy scriptures that have been damaged beyond repair must be buried.

Prior to the books’ burial in a Jerusalem cemetery, about 1,000 people, nearly all of them Orthodox, attended a memorial service and political rally in the heart of the city.

Some of the people carried banners that read “When One Burns Books, One Will, in the End, Burn People.”

Many in the crowd said they found it ironic that Palestinians had desecrated Joseph’s Tomb, one of Judaism’s holiest sites, when they were so concerned by charges that Israel was desecrating Islamic sites on the Temple Mount.

“We think the people of Israel should remember the vandalism done by hundreds of Arabs at the end of September. People need to know who we’re dealing with” in the peace negotiations, said Ya’akov Sternberg, a leader of the right-wing organization Ma’amatz.

Nadia Matar, co-chair of the group Women in Green, compared the desecration at Joseph’s Tomb to Kristallnacht, the Nov. 9-10, 1938, “Night of Broken Glass,” when marauding bands of Nazis destroyed Jewish property in Germany.